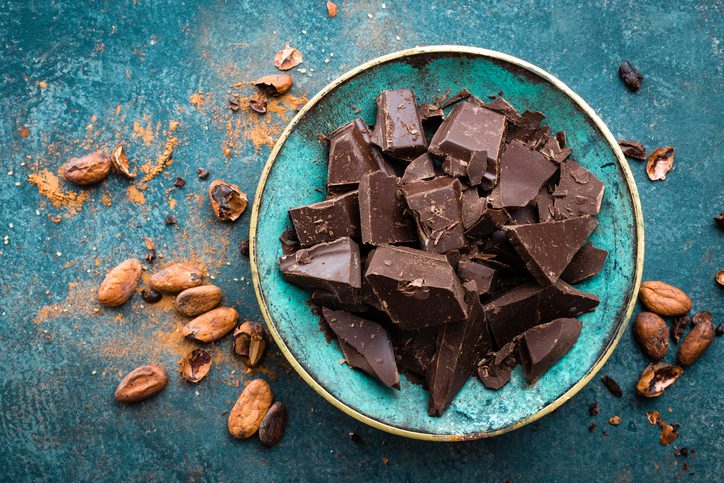 In comparison to milk chocolate, dark chocolate contains half the amount of sugar. While each contains a certain amount of cocoa, milk chocolate has significantly less – 10 per cent versus upwards to 90 per cent cocoa in dark chcocolate. The more cocoa, the more fibre, minerals and antioxidants.

Published in the Frontiers in Immunology (2017), a group of researchers reviewed the biological and clinical applications of dark chocolate and what makes it beneficial for human health. Cocoa possesses a large number of polyphenols that exert antioxidant and anti-inflammatory effects. They do this by switching on several signalling pathways. Primarily, these polyphenols induce the release of nitric oxide (NO) by activating NO synthase in our cardiovascular system. Functionally, NO release causes blood vessels to vasodilation (dilate – increase in diameter). Additionally, cardioprotective effects have been found with cocoa polyphenols.

Related: How to avoid the common cold this winter

As NO is released, it will signal many actions in the cardiovascular system including smooth muscle relaxation (dilation of blood vessels) and increasing blood flow to muscles and organs. As well as causing several actions that decrease the number of inflammatory agents. Both are beneficial for endurance athletes as it enables greater blood flow to working muscles, and reduces inflammation.

In the central nervous system (CNS), polyphenols found in cocoa have been found to interact with neurogenesis pathways that help grow and develop nervous tissue. As found in the cardiovascular system, cocoa increases the generation of NO within the CNS which leads to an increase in cerebral (brain) blood flow. The increased blood flow allows for an increased supply of oxygen and glucose to the brain. (Glucose is the only fuel source the brain can use.)

Cocoa’s beneficial effect is not limited to just the cardiovascular and central nervous systems. Studies have shown positive effects on the immune system, gastrointestinal tract and obesity.

So keep enjoying a slice of dark chocolate with your afternoon tea or coffee. Just be wary with how much you indulge. Dark chocolate (70-85% cocoa) contains roughly 40 grams of fat per 100g, that’s three times the fat content of an avocado (100g).