Being an epic country, it’s no surprise that Canada has a huge selection of races to challenge every level of triathlete. Whittling down the many opportunities isn’t easy, but here are ten of our favourites. While some have substantial history and others are breaking new ground, they all offer unique opportunities to explore personal best times on your own home turf.  Get to know your country better, one race at a time, while swimming, biking and running through some of our most beautiful regions.

From the shore of Lac Megantic at dawn, to the peak of Mount Megantic by midnight, this race pays tribute to the Canadian pioneers who bravely trekked into the wilderness to make new lives. In that independent spirit, racers are largely on their own for this course with a notable absence of volunteers along the way.

After finishing a 3.8 km swim, this ultimate race has 2,500 metres of elevation through 180 km of cycling. The run travels 42 km of roads and trails that add up to another 1,500 m of elevation. The race’s endpoint is an astronomy observatory on top of the mountain in Megantic National Park. This region was the world’s first designated dark sky reserve and ‘Reach the stars before midnight’ is a prominent message of this outstanding race.

Due east of Montreal, Lac Megantic is very close to the state of Maine in the United States. This year’s race rendition will offer four spots for the XTri World Championships and for the Norseman 2020. 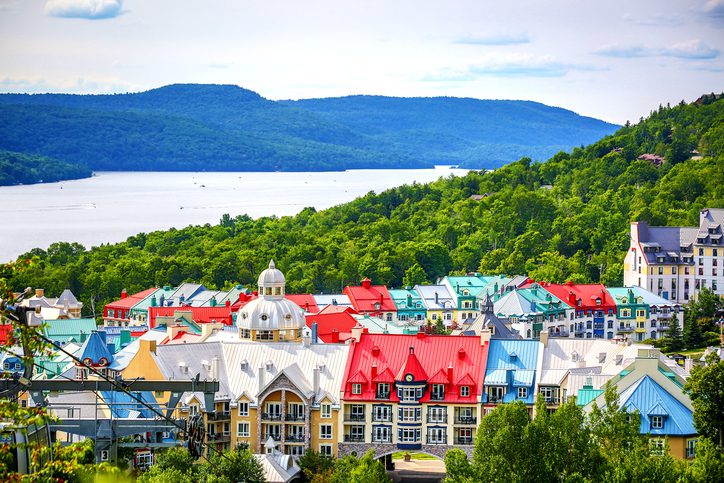 Mont Tremblant has long been a much-loved triathlon event both for athletes and their families. Set in a very popular area that boasts incredible views and a lovely pedestrian village, there is no end of activities for everyone in this ideal destination. Located just an hour and a half north of Montreal, the locals are well-geared for providing visitors with a supportive and warm welcome.

Related: All you need to know for Ironman Mont-Tremblant

Mont-Tremblant is one of only two places in the country where Ironman World Championship spots can be earned. Having both the Ironman and 70.3 filled to registration capacity is not unusual, so it’s a good idea to sign up early. Most years the swim in Lac Tremblant does allow wetsuits and once out of the water, athletes will find a red carpet-lined run to the first transition zone. The challenging bike course winds along roads through low mountains and forests while the run uses Le P’tit Train du Nord, a former railway bed that has been transformed into Canada’s longest linear park. While once made of crushed gravel, this feature has been paved for this event.

In 2019, Edmonton will be the seventh stop in the ITU World Triathlon Series, an event the city has hosted since 2015. Last year, they added the Mixed Relay Series format to the roster which sees two women and two men each finish a mini triathlon before tagging a teammate. This competition will make its Olympic debut in 2020 in Tokyo, just a few months after Edmonton will be hosting the ITU World Championship for the third time.

Swimming, biking and running through the city’s beautiful river valley are not just for the professionals and elites. Large numbers of people will also compete in categories that include team relay, aquabike, youth/junior super sprint and paratriathlon. There’s a try-a-tri option, too, and with the closed course set-up, it is an appealing environment for newbies to see what triathlon is all about.

Since 2016, the unique Old Port of Montreal has been a stand-out venue for the World Triathlon Series circuit, however, in 2019, there are venue changes happening. The main venue will be the Grand Quay, described by ITU as a “new field-of-play offering indoor and outdoor infrastructures that will enhance the experience of athletes and spectators.” The quay is located in Old Montreal and the cycle segment, known to be technically and strategically challenging, will remain in the historic streets. The swim venue will be in the Alexandra Basin and athletes will run along the Lachine Canal, closer to the main venue.

Related: A thriller in Montreal

Aside from the many professional triathletes competing, the race also attracts lots of amateurs from all ages and levels of ability in the standard, sprint, try-a-tri and corporate challenge categories. This is a very urban triathlon event, set among one of Canada’s oldest settlements. More than twenty percent of participants are from outside the province and no doubt, their list of local things to do after the race will be quite long.

One of the sport’s oldest Ironman qualifiers, for decades Ironman Canada was renowned as one of the sport’s premier long-distance races, with community support like no other around the world. The race moved to Whistler in 2013, but was set to return to the Okanagan Valley in 2019.

The traditional course begins with a swim in beautiful Okanagan Lake, followed by a spectacular one-loop bike that takes athletes up the famed Richter Pass. The day finishes out with a spectator-filled run course.

While the COVID-19 pandemic will likely delay the much-anticipated return to racing in Penticton, there’s little doubt it will quickly become a mainstay on the Canadian triathlon circuit once again.

Dubbed the largest independent triathlon event in North America, this year will mark the sixth anniversary of the Barrelman Triathlon in Niagara Falls. This popular race is unique as it is the only point-to-point triathlon in Ontario. It is known as a flat and fast course that is well-suited to triathletes of all skill levels.

Beginning at Welland’s International Flatwater Centre, half-distance participants swim in the recreational waterway which is described as pristine, sheltered and not subject to adverse weather conditions. The open road bike course takes cyclists south to Lake Erie and then east to the city of Niagara Falls. Finally, the run is comprised of a two-loop circuit that parallels the amazing Niagara River. You will get to see the falls not once, but twice, along with other local attractions. In addition to the half-distance race, there are the options of doing a half relay, swim/bike or bike/run combinations. If you’re interested in this one, don’t wait too long as there is a maximum of 1,250 registrations and spots were already going faster than usual last fall. 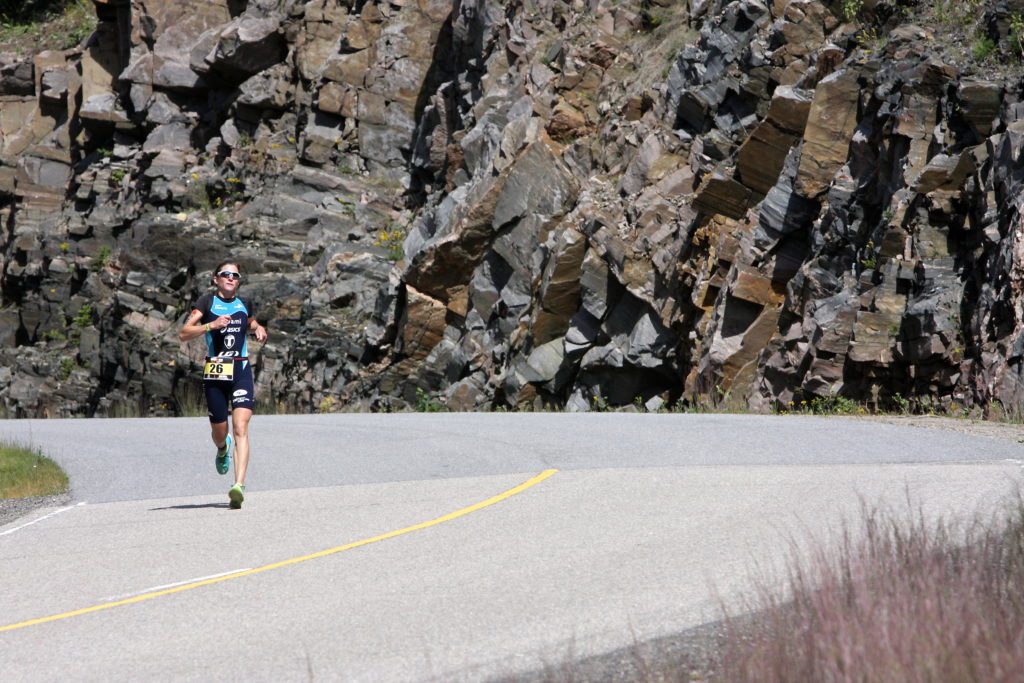 Known to many as “Beauty and the Beast,” Ironman 70.3 Muskoka is Ontario’s only Ironman competition and it is a very popular event among triathletes and their families. Located a few hours north of Toronto in Huntsville, the town is a tourist mecca that offers so many things to do in this spectacular setting of forests and lakes within the Canadian shield.

Related: After you finish Ironman 70.3 Muskoka

Huntsville has been hosting triathlons for almost 30 years and although the Ironman course was made less hilly in 2017, the race’s 10th anniversary, it’s reputation as a tough course wasn’t affected. The Canada Summit Centre, just steps from swim venue of Fairy Lake, is the starting point for both the run and bike courses. Built in 2010 for the G8 Summit of world leaders in downtown Huntsville, the centre has been renovated and is now used as a spacious recreation and leisure facility. This year’s race categories include individual triathlon or duathlon and there will also be relay options.

Over in Stony Plain, Alberta, the Great White North Triathlon has been a big hit since its debut back in 1991. It is known as a fast course with a 2009 male record of 3 hours, 43 minutes, 1 second and a 1993 female record of 4 hours, 14 minutes, 18 seconds. Registrations number around 800 people and the volunteer roster is well over 500, creating impressive support for everyone. Racers can choose from professional/elite, age group, relay or Paralympic categories in a half-distance, team-half, Olympic, duathlon or aquabike races.

Stony Plain is just west of Edmonton and, given the typical water temperatures for this region in early July, wetsuits are highly recommended. Starting out at the Allan Beach Resort, swimmers tackle the usually calm Hubbles Lake before cycling along roads that are mostly in the rural areas surrounding the town. The race wraps up with a run course that follows streets and recreational trails within town. Whether before, during or after the race, keep an eye out for Stony Plain’s 35 detailed murals that illustrate the town’s rich history.

This exceptional event began as an Olympic distance race, but has expanded to offer much more over several decades. In 2019, the 35th consecutive edition of Esprit will introduce another new option with an aquabike race. Participants can choose from diverse categories that include U13 – U15, corporate teams, run races and discovery triathlon to name a few.

The venue holds exceptional appeal for several reasons. The competition takes place entirely on an island in the St. Lawrence originally created for Expo in 1967. Montreal hosts the annual Formula One Grand Prix every summer on this island and the incredibly smooth racing track, the Circuit Gilles-Villeneuve, is ideal for cycling. Running segments follow the perimeter of the rowing basin which offers calm waters for swimmers. The race’s flat course is known for fast results and appeals to all skill levels. Esprit attracts a lot of first-timers and the venue makes it very easy for spectators to watch all the segments.

The Memphregog Triathlon Club first organized this event to promote the sport in 1995. Starting with 300 racers that year, the event has steadily attracted more participants and tallied over 2400 racers in 2018.  Hosted in the city of Magog, west of Sherbrook, the region’s fabulous scenery boosts the enjoyment of each course. The swim venue, Lake Memphremagog, extends right to the edge of the province and beyond into the state of Vermont.

Races at Tri-Memphre extend over two days to make time for all the categories of discovery, youth, sprint, Olympic, half-distance, duathlon, aquabike and the Quebec Cup for U13-U15 and junior. There is definitely something for every ability level and all will appreciate the weekend’s great organization and lively environment. On the green side, race organizers take environmental issues seriously and have adapted many event components to achieve eco-responsibility.