While there isn’t much in the way of race news, triathletes Lionel Sanders and Sam Long have been keeping us entertained with their cycling exploits up Mt. Lemmon in Arizona.

Read this story in French:

In this time of pandemic, there is little news in the world of triathlon. The only news is usually the announcement of the cancellation of competitions. It’s a good thing Lionel Sanders is here to entertain us with his Youtube videos and cycling exploits!

Since his triathlon debut Lionel Sanders has used the city of Tucson, Arizona as his winter training ground as he prepares for the competitive season. Tucson is a popular spot for cyclists and triathletes, and the 42 km climb (with a 4% average grade) up Mount Lemmon, is very popular.

The first time Sanders rode Mount Lemmon on his bike was in February, 2011 with Barrie Shepley’s Canadian Cross Training Club group. His time to the top (to the ski hill): 1:59. Two months later, Sanders returned to Tucson, and borrowed a carbon bike (Sanders had an aluminum bike at the time) from his training partner Sean Betchel. His time: 1:44, considerably faster than his first attempt and faster than Betchel’s best time (1:49).

It is important to note, however, that on Strava there are several segments for the ascent of Mount Lemmon. The segment Sanders was doing was the one up to the top, which was up to the fence next to the ski hill. Another more “popular” segment on Strava, however, finishes a little lower, ending at Ski Run Road. Although Sanders was very close to the best time to the summit (1:42:48 vs. 1:42:10), he was quite far from the best time to Ski Run Road. (1:35:40 vs. 1:31:17).

In March 2015, Sanders was back in Tucson with his coach Barrie Shepley. This time Sanders managed to improve his time to Ski Run Road with a time of 1:28:04. However, rather than stop at Ski Run Road, Sanders continued his effort to the top and stopped the clock in 1:34:21, more than 7 minutes faster than the best time. His average wattage for the feat: 348 watts.

Five years later, Sanders spends a lot more time in Tucson. Rather than going to Arizona a few weeks each year, Sanders now spends most of his time there. The warmth, the beautiful swimming pool in Oro Valley, the long bike path and the many cycling routes make this area a great place to train. It also allows Sanders to continue testing himself on Mount Lemmon.

On March 17, Sanders decided to test his form by trying to beat the Strava segment called “Mt. Lemmon Official,” which ends even lower than Ski Run Rd., before the descent before the last climb to the summit. Sanders beat Phil Gaimon’s best time (1:15:27) by more than two minutes: 1:13:11. Sanders now also holds the slightly longer Strava segment named “Mount Lemmon” with a time of 1:16:17 (Gaimon’s time: 1:18:32). Sanders pushed 382 watts for that effort.

A week later, on March 24, young professional triathlete Sam Long tried to beat Sanders’ time. His effort is very impressive. He pushed 403 watts (he’s heavier than Sanders) and stopped the clock at 1:16:48, just a few seconds slower than Sanders. Long made this time only a few days after a 250-mile (400-kilometer) outing. There is no doubt that with proper preparation including a period of rest, Long has a good chance of beating Sanders’ time. Long is only 24 years old and has a lot of potential. He won Ironman Chattanooga last year, which earned him a spot at the Ironman World Championship in Hawaii this year (if it happens). Sanders and Long have a very similar profile. Both are uber-bikers and good riders.

It’s really impressive to see two triathletes have the two best times for climbing Mount Lemmon, ahead of big cycling names like Phil Gaimon, Tom Danielson and Michael Woods. With the triathlon season postponed, there may be a rivalry between Sanders and Long for the Strava KOM up Mount Lemmon. While we’re all confined to our homes, it’s fun to follow this rivalry and watch Sanders videos on Youtube. 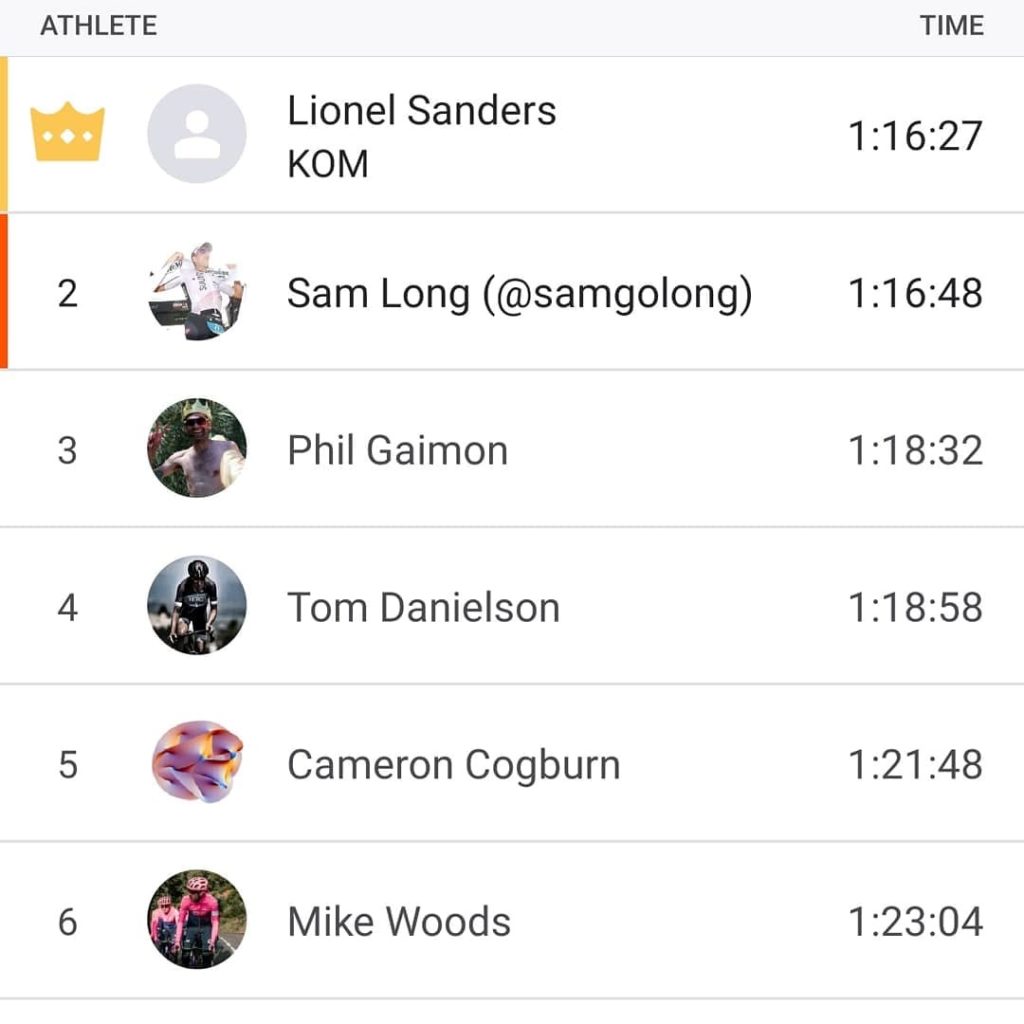