On Monday we reported that Skye Moench and Ben Kanute were in quarantine in Slovakia after positive COVID tests stalled their travel back to the United States after the Collins Cup. We profiled Moench in the July issue of Triathlon Magazine Canada and, as you’ll soon find out, she’s no stranger to overcoming challenges on her way to the highest levels of the sport.

She remembers almost nothing from that day: Sept 24, 2019. The same canyon route near her home in Salt Lake City. The same descent. Just a routine training ride with her usual partner. And then, a stranger stands over her as she struggles to sit up. Reality sets in while lying in a hospital bed in the emergency room: Skye Moench will not be toeing the line at Kona after beating a top field at the Ironman European Championship in Frankfurt to qualify. Her elbow and thumb were shattered. She could barely move.

For more than six months, through multiple surgeries and endless physical therapy, a single driving mantra: “I’m going to recover SO HARD to race in 2020.”

We all know what happened next: A whole triathlon season wiped out for everyone. Now, we’re all mounting our own comebacks from a global pandemic.

And what of Skye Moench’s could-have-been epic comeback from a horrific crash? “I would rather crash my bike and break three bones again than have to go through COVID again.”

“Obviously, the crash was devastating, and not going to Kona really sucked for my career and all the momentum I had,” she says. “But mentally there was such a plan: I’d have this surgery, then this PT for X number of weeks, and as soon as my bones heal, I can run. All those benchmarks kept me going. I hauled through that recovery with so much positivity.”

Set for a comeback at 2020 Ironman 70.3 Oceanside, Moench watched with the rest of us as races dropped from the calendar, as so many got sick, so many died. The “crash comeback” story faded as 2021 began to look like a comeback year for all of us, from the collective ongoing pandemic catastrophe. COVID had cancelled her comeback.

Flash forward to what became the unofficial 2021 season opener: Ironman 70.3 Texas in Galveston. Moench broke the tape more than a minute ahead of the field. Crash comeback, COVID comeback: conquered. Moench commented that the first thing she noticed in her finish-line photo was her elbow – now permanently bent as a result of the crash. Six weeks later, Moench backed up the Texas victory with a strong third-place showing in a stacked field at Ironman Tulsa.

Born in Lethbridge, Alta., Moench is a dual US-Canadian citizen, after spending her first 12 years in Alberta. Her family bounced around a lot, following her mother’s career as a dental hygienist, but the Edmonton area holds the most cherished memories: Visiting the family farm where her grandfather grew up, and taking vacations in Waterton National Park.

After swim lessons, her mother would stop at the nearby gas station for those five-cent candies. Now living in Utah, Moench still misses the childhood thrill of a pocketful of nickels and pennies, plunked on the counter in exchange for Cherry Blasters or Fuzzy Peaches. “There’s just nothing like Canadian candy and chocolate,” says Moench; “I’d still buy them now if I could.”

Following her parents’ acrimonious divorce when she was 12, Moench and her two sisters moved with their mother to Washington state in the United States, then on to Utah. Between the relocations in Canada, then in the US, it was a lot of moving, a lot of being the new kid in class. “I had to make new friends all the time,” she remembers. “Getting comfortable with feeling uncomfortable was the only option. It developed my toughness.”

“My sisters and I experienced a lot of trauma associated with my parents’ divorce,” she continues. “Life felt so difficult then. But it helped me deal with stuff that happened later: anything after that never felt worse than what I’d already gone through.”

Feeling the odd man out – and not letting it stop her – followed her into the ranks of professional triathlon. “It felt like there was an elite club, and I wasn’t in it. For the first couple of years, I just shut up and worked hard.”

Moench considers herself an athletic late bloomer. She learned to love the outdoors on family trips to Canadian national parks, but was never competitive at sports in school. She enjoyed swimming (but perhaps loved five-cent candies more). School ski trips didn’t ignite her competitive fire. A neighbor encouraged her to try running, and she enjoyed it, completing her first marathon while still in high school. But rather than sports, she found she had a talent for math. And working with numbers offered a certainty never guaranteed by her nomadic childhood.

Through high school, she excelled in calculus and finance classes, and began to dream of a career in accounting, of wearing a business suit and a pair of sensible heels to a shiny office. Accounting offered security and a clear path to success: attend her dream school (Brigham Young University) and work for one of the “big four” accounting firms (Ernst and Young).

As a high school senior, she recalls writing a paper on triathlon as part of a class, her first discovery of the sport. But she wasn’t inspired to alter her career plans. At least not yet.

Rather, Moench executed her plan, working her way through college to graduate debt-free. An internship with a top accounting firm would lead to a full-time job.

And yet, there was that paper on triathlon. Four years after penning that assignment, while working her way through the BYU accounting program, she borrowed a bicycle, dropped the saddle, and did her first triathlon, the True Cougar Tri. She bought bike shoes the day before the race. She wore cotton shorts. She came fifth overall. And she had fun – the joy experienced by so many at their first race, of leaving it all out there, feeling the wind and soaking up the experience.

By 2010, with a little disposable income from her accounting internship, she bought a bike and a wetsuit, and did a few more local races.

“I don’t know how I knew that triathlon would be my thing,” she says. “I liked swimming and grew up riding a bike, and I liked running. It was just fate. Something was planted inside of me and I just had this gut feeling that I wanted to do it.”

For her first half-distance event, she printed out two months of blank calendars and filled in a training plan for herself. “I was completely naïve, but just happy to be doing it. It’s the joy of beginner triathlon: You don’t know what you’re in for. I just thought I could do it.” 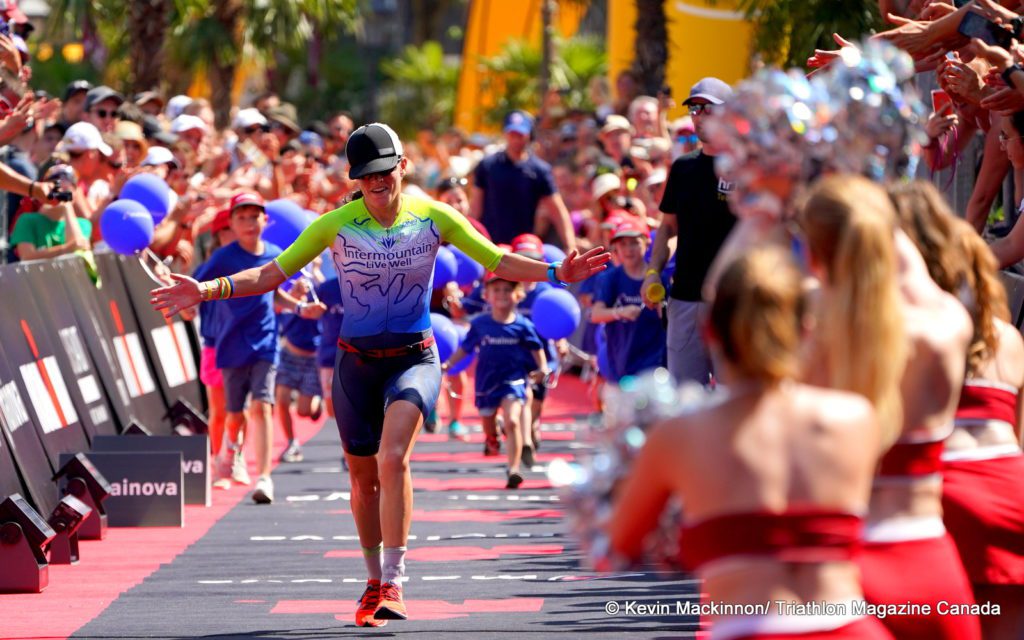 Skye takes a leap of faith.

What is it about triathlon and accounting? Where does the super-analytical person meet the leap-of-faith person? In Skye Moench, they don’t meet as much as overlap.

“This feeling just ate away at me. I was doing taxes and thinking about triathlon constantly, that I could be good at that.” She started to dream of triathlon as a career.

“I was so responsible, taking this super safe path all through school and work,” she says. “I had no debt, my parents were proud of me. It was a great thing. But I’ve also been one that can’t deny my gut feelings, whether speaking on something I’m passionate about or making a change that needs to be made in my life.”

So Moench did was she always does: She made a plan. She talked to her boss about going part-time. She got a coach. She felt intentional. “I hadn’t done Ironman-branded races. I didn’t even know there was a pro ecosystem until that time. I hadn’t ever been on a tri bike. I just knew I was pretty good, and that I could get better.”

Friends and colleagues helped convince her logical brain that accounting would always be there if it didn’t work out.

In her last year as an amateur, Moench entered four Ironman 70.3 races. She won all of them as an age-grouper, and qualified for her pro card. And then she leapt.

Skye gets her butt handed to her.

At her first pro race, 2016’s Oceanside, Moench couldn’t believe how fast the other pro women were.  The famous people, the big names, were crushing her on the course. She felt a familiar emotion: That of being the new kid. “I wasn’t part of that group and was nowhere near them. I immediately got my butt handed to me when I went pro.”

Her results in 2016 and 2017 left her unsatisfied; her best finish at a major race was fourth. She couldn’t crack the podium. At her first full-distance race in 2016, she finished a disappointing 11th at Ironman Arizona.

“I had my moments where I didn’t have good results and felt I wasn’t making progress. I was spending thousands, had no sponsors, and wasn’t winning much money. I knew there would be a point where it would not be financially justifiable.” Her husband, Matt, was still working full time, allowing her to keep training and racing. “I thought I’d give it another few years, and if I don’t get better, it probably isn’t worth it.”

So again, Skye Moench did what Skye Moench does: She made another plan. She made a big coaching change and tweaked her nutrition. She started training harder, and smarter, and added more strength work. And the accountant let go of data, stopped obsessing about technology and numbers.

Moench thrice cracked the top three at major events in 2018, and in 2019, won the Ironman European Championship, as well as Ironman 70.3 Boulder. Then that fateful canyon ride put her acceleration on hold until now: The comeback of comebacks, the win at Ironman Texas 70.3. “I felt like I needed to do that.”

What does the rest of 2021 have in store for Skye Moench? For now she’s just excited to be back to racing, to being part of the triathlon community again. She’s looking ahead to that long-delayed Kona starting line. Her mom and stepdad will be there supporting her. The in-laws are coming. Her husband, dissatisfied with his own job, just resigned and she’s now the family breadwinner: “It’s all on me now.” But Moench isn’t worried. After all, she has a plan.

Christine Frietchen is an American freelance journalist. She profiled Rach McBride in our May issue.