Endorsed by Olympic gold medallist Simon Whitfield, the SwimFast ergometer offers triathletes a way to enhance their swim training in the comfort of their own home. 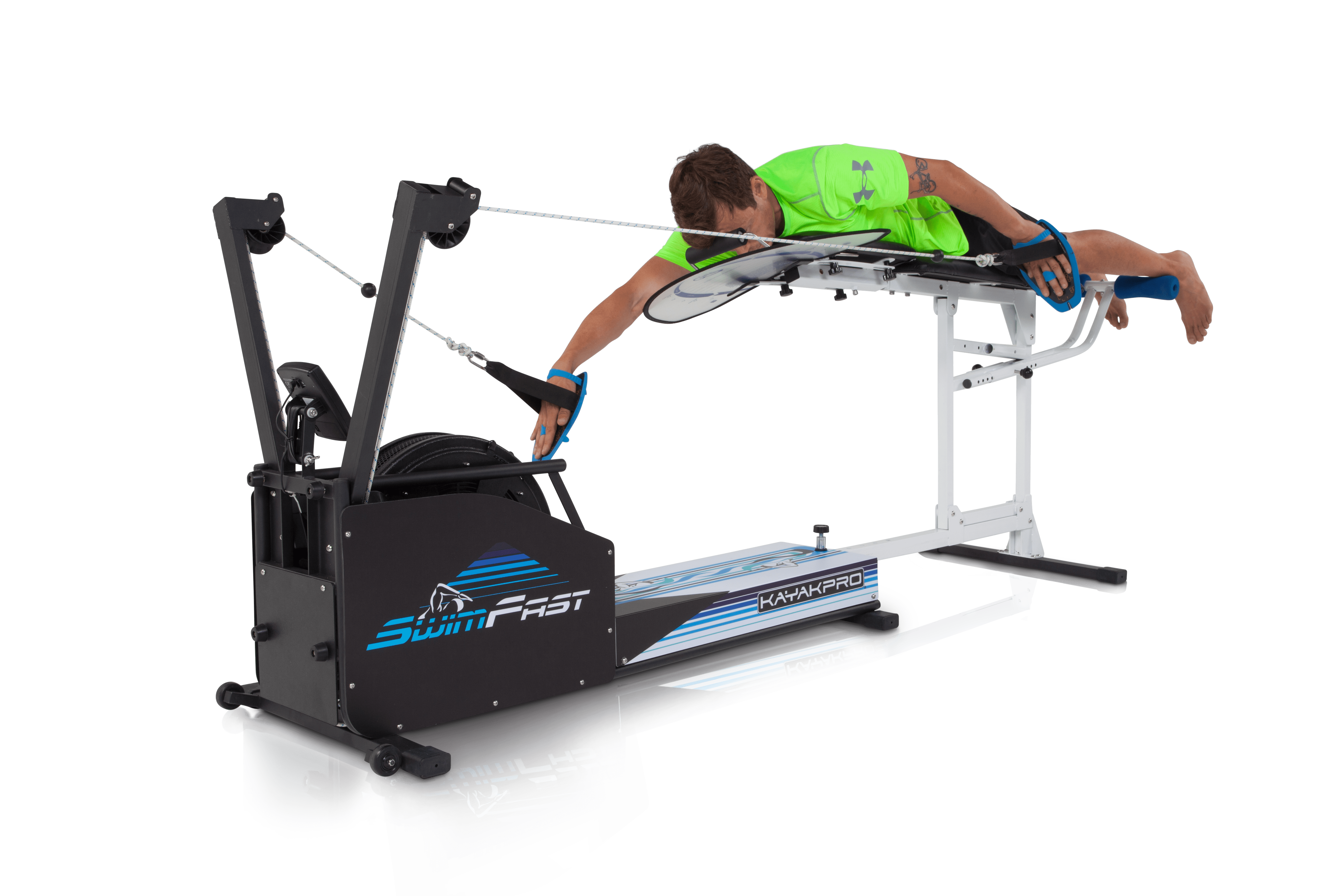 Unless you come from a swimming background, swim training can often be the most tedious component of a triathlete’s training. Unlike cycling or running, where you can get a workout done at your own leisure, a swim workout often requires scheduling, and then there’s the travel time to and from the pool.

A swim ergometer shouldn’t ever replace your swim training completely, but it can be a useful aid to allow you to get a swim session done when you can’t get to the pool. More importantly, though, a swim ergometer can provide some concrete data and tips to improve your technique. 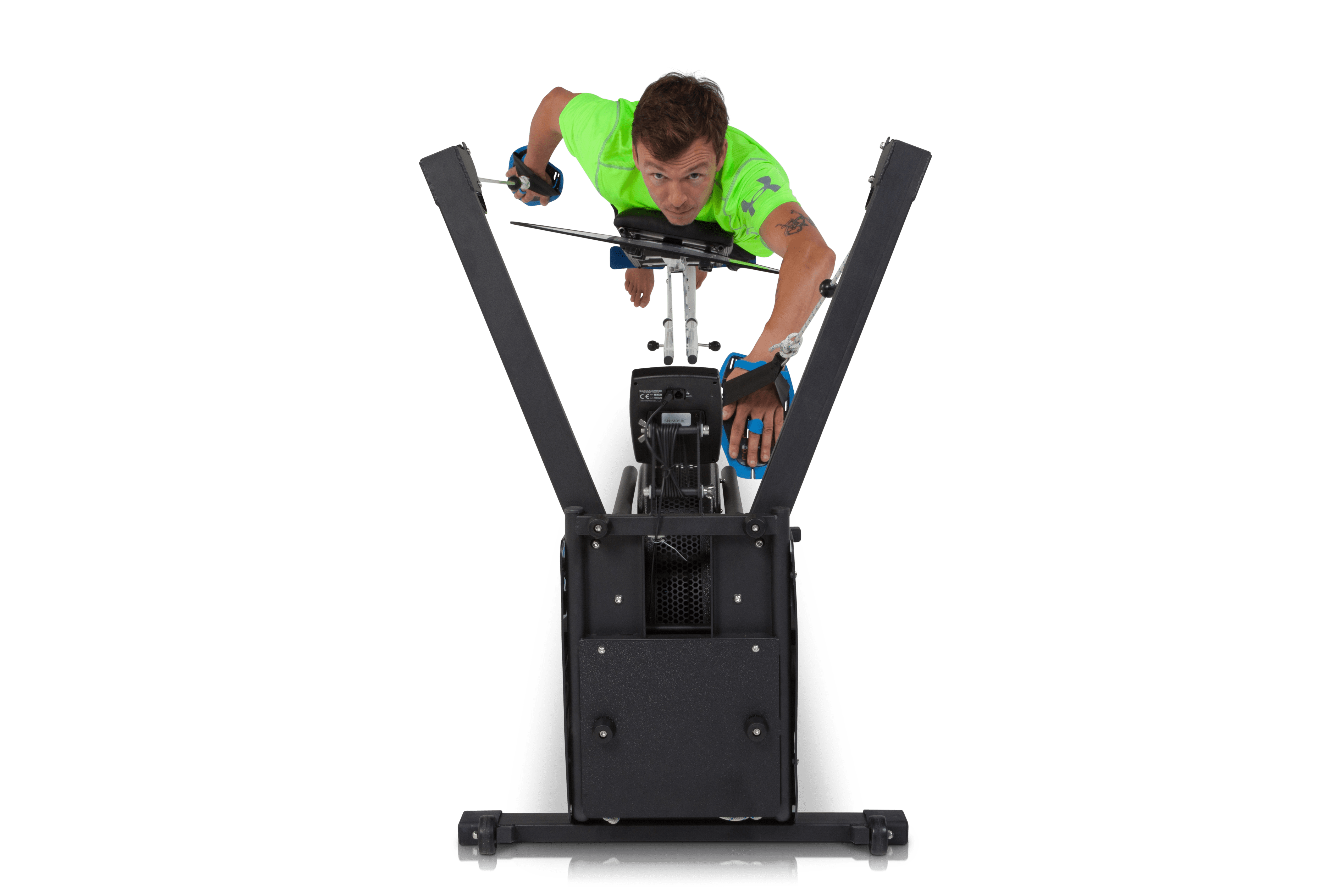 Made by KayakPro, the SwimFast ergometer does a great job of replicating the swim experience. Unlike other swim benches we’ve tried, the SwimFast has a rotational bench that does a great job of replicating the rolling motion used for freestyle, there’s a forehead support to keep your head in the right position and the erg provides one of the most realistic “feel for the water” experiences we’ve seen in this type of training tool.

We asked the coaches from the Golden Horshoe Aquatic Club (GHAC) in Hamilton, Ontario to give the SwimFast ergometer a try and it quickly became a mainstay for the team as part of their dryland training workouts. The coaches and athletes were especially impressed with the smoothness of the unit – the “airbrake” flywheel provides realistic resistance that’s similar to being in water and there’s no delay up at the front end of the stroke waiting for the “catch” phase. Thanks to the adjustability of the padded bench the SwimFast ergometer accommodated all the athletes with ease – tiny 10-year-old girls and 6’5” guys heading to this April’s Olympic Trials were all able to get a good set done. The only concern the folks at GHAC had about the unit was the padding on the bench – they fear that it won’t stand up to the daily use they’ve been putting the erg through. That shouldn’t be an issue for those using the SwimFast erg as a home unit, though.

One of the best features of the ergometer, the rotational bench, takes some getting used to, so the GHAC coaches often leave that component locked and had the athletes pull with both arms at the same time to work on their strength during dryland circuit sessions. Then, when they wanted to use the bench as more of a swim simulation, they would use the rotational component and have the athletes use one arm at a time to focus on various components of their stroke. 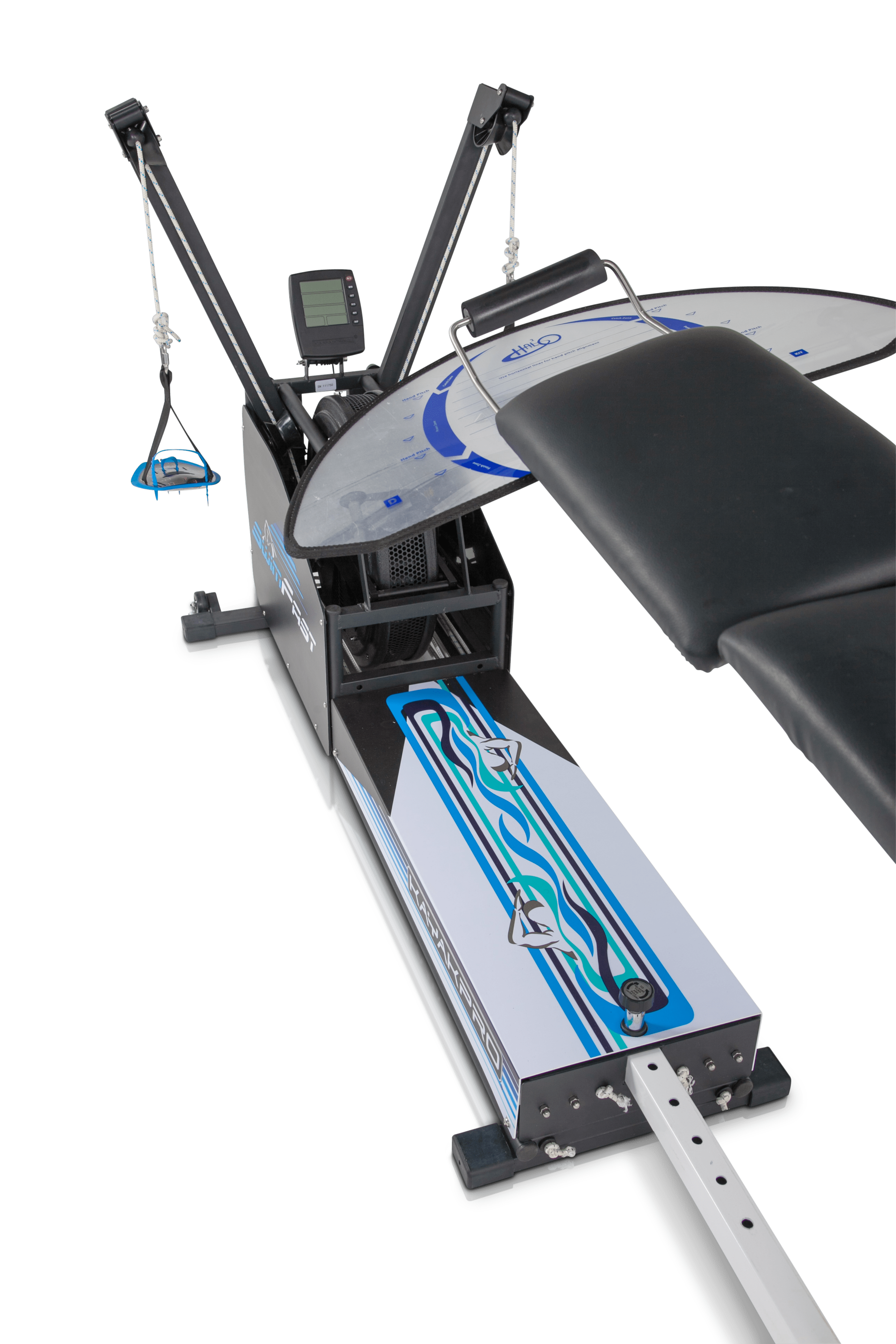 While the GHAC team hasn’t utilized the Halo Trainer template that can be integrated with the SwimFast Ergometer, athletes hoping to use the erg as a way to improve their swim stroke will want to give that feature a shot – it offers a great opportunity to work the essential components of a good swim stroke: a high elbow catch and the ability to keep your forearm vertical during that critical catch phase.

Another great training feature of the SwimFast ergometer is the ability to measure a variety of metrics. Everything from calories burned, length of session, intervals, heart rate to the amount of power generated can be monitored through the console. 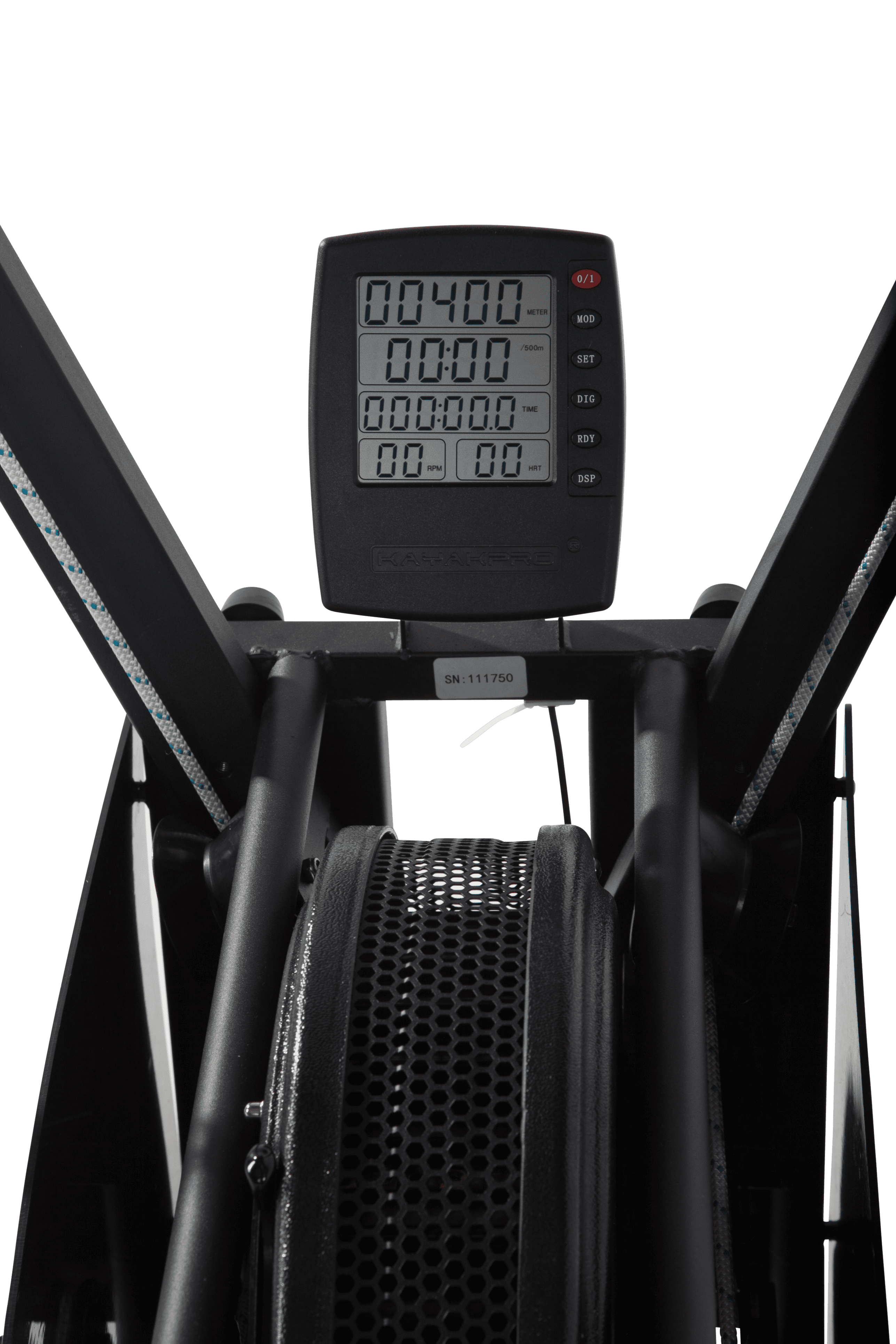 When you’re done with your training the erg can be set up or taken down in less than a minute and stores upright, so you can slide it into a closet if you want to keep it out of the way. 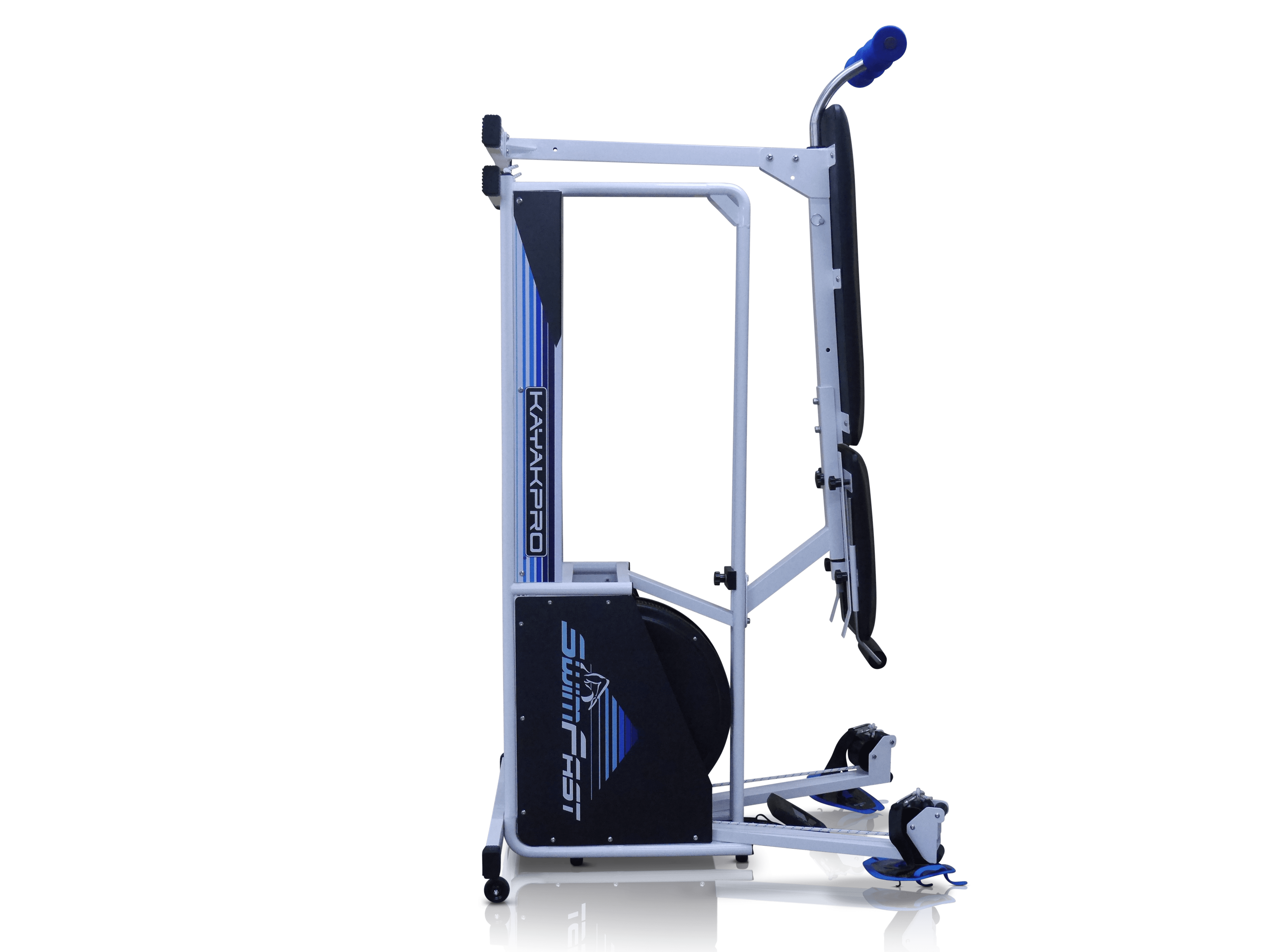 The GHAC coaches liked the SwimFast erg so much they’ve decided to buy the unit so they can continue to use it with their athletes through the rest of the swim season. If you’re looking for a training tool you can keep at home to enhance your swim training, the SwimFast ergometer might be worth a look.