Times are changing. So are the approaches that athletes are taking to engage their fans and sponsors when a global pandemic has shut down just about all competitions. This is especially true for triathletes.

On Friday, October 23, 2020, Canadian triathlete Lionel Sanders set out to complete what has come to be known as the #LSHour. He set a brand new one-hour Canadian record in a velodrome riding for a total of 51.3 kilometres in 60 minutes. He did so live on YouTube with 11,000+ viewers, which even included famous UCI World Tour riders Alex Dowsett and current one-hour world record holder Victor Campenaerts. The stream also went on to surpass 85,000 views in just the first 24 hours of being online.

While Sanders’ mid-pandemic achievement was undoubtedly one of the most exciting accomplishments by a multi-sport athlete during a strange 2020 season, this feat also achieved some incredibly positive outcomes for both Sanders and his many sponsors. Let’s unpack it.

The traditional landscape for pro-triathletes and sponsor relationships

It’s no secret that most professional sports teams often have the luxury of an exclusive partnerships department to facilitate sponsor relationships that drive plenty of revenue. However, professional individual sport athletes are usually out on their own to secure sponsors that also play an immense role in supporting their day to day livelihood. For pro athletes like Sanders, who are not paid a salary like athletes signed to a professional team, a significant income source is typically earned by winning prize purses at races. To help him get there, obtaining sponsors plays a substantial role in securing additional income. It also subsidizes the expensive equipment needed to compete at high levels, and allows him to continue to focus on training while enabling him to pay the bills just like you and me.

When you think of a great sponsor-athlete affiliation, you can always find the term “value” at the relationship’s core. In the case of many professional sports teams, the simple “value” provided to sponsors can be the undivided attention of thousands of fans in a stadium multiple times a year.

However, for most professional triathletes, sponsors receive the simple “value” when their sponsored athlete ends up on a podium sporting their brand’s logo and colours. Similarly, “value” is provided to sponsors when a triathlete sets the fastest timing split on a course while consuming a brand’s nutrition, wearing a particular brand of running shoes, or even riding a top of the line bike.

Nowadays, with the increased use of social media and the rise of globalized access to world-class triathletes on platforms like Instagram, Twitter, YouTube and more, this “value” has exponentially increased for both the athletes and sponsors. However, for triathletes to ensure returning the aforementioned primary “value” to sponsors, one major part of the equation is missing in 2020. The pandemic has forced racing to shut down; therefore, athletes like Sanders have not been able to place on podiums.

These circumstances have forced triathletes like Sanders to find ways to stay motivated, remain in excellent shape and still develop creative ways to drive “value” for sponsors. The right combination of the above would allow for steady income and equipment endorsements to keep flowing.

Fortunately for Sanders, he has a tremendous tool at his disposal that he actively leverages and simultaneously brings value to him and his sponsors. Especially during the pandemic.

Over the past few years, with the help of videographer Talbot Cox and wife/manager, Erin Macdonald (who also gets behind the camera from time to time), he’s been documenting his training experiences on YouTube. It’s no secret that when you are one of the best in your sport, everyone wants to see what an athlete of your calibre is capable of accomplishing. They want to know what exactly he’s doing to land on the podium so often, including a second-place finish at the 2017 Ironman World Championship in Kailua-Kona, Hawaii.

Sanders has positioned himself very well within the pro triathlete circle from a sports marketing and brand perspective. His story of overcoming adversity is incredibly inspiring and can be easily relatable to others. His mantra of “No Limits” is authentic because he lives up to it in every sense of the term. Combined, Sanders’ work ethic, story, and genuine personality have allowed his following to skyrocket exponentially. It’s no surprise that at the time of writing he has amassed over 106,000 subscribers on his YouTube channel in a very niche market.

For his brand and many key sponsors, this channel has been a critical factor in what Sanders has accomplished in the last few months with no racing. As opposed to wondering when he will be able to race again, Sanders and his team chose to set some very intelligent goals. They ensured everything he would work towards would benefit his physical fitness and create exciting content for his followers, which draw attention to sponsors by default.

The #LSHour – what Sanders’ is doing differently than others

With hardly any racing taking place since March, the #LSHour allowed major triathlon sponsors to receive immense exposure like they haven’t seen in months. Unlike most on YouTube, who mainly upload for subscribers, Sanders decided to take a page out of a different playbook. Instead, he followed in the footsteps of people like Will Smith and David Blaine, who’ve attempted thrilling stunts in real-time while broadcasting on YouTube. In his case, Sanders wasn’t attempting to helibungee over the Grand Canyon or freefall from nearly 25,000 feet in the sky while attached to helium balloons. Rather, for the first time in months, a triathlete with a massive following announced an attempt at a thrilling feat of breaking an impressive record while live on YouTube. This meant that regardless of their pandemic/quarantine situation, every Lionel Sanders fan worldwide could watch him in real-time. For just one hour, the #LSHour would allow everyone watching to feel the excitement that comes with knowing it’s “race day.” 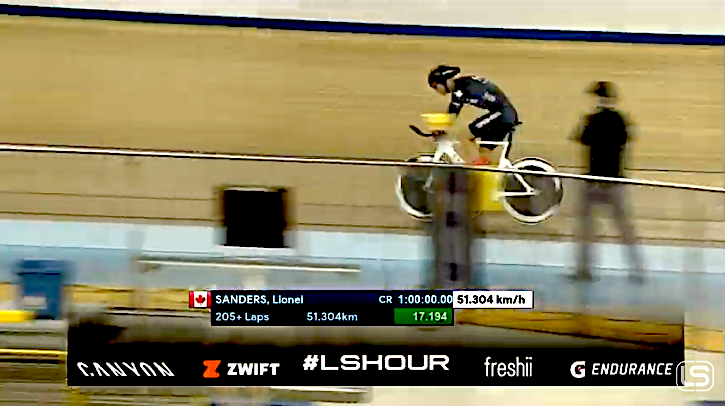 From a pure business perspective, there was also plenty of excitement for sponsors. Whether the announcers were discussing the equipment Sanders was using to set the record, or being featured in side-segments played during the broadcast, sponsors we’re always top of mind. Sanders even released a four-part mini-video series about his experience leading up to the event filled with sponsor mentions and products that amassed over 285,000 views on YouTube at the time of writing.

This event couldn’t have come at a better time. As the world grapples with efforts to overcome the pandemic, there have recently been small signs of racing returning soon. In the past few weeks, a handful of major triathlons have taken place in certain parts of Europe and the United States. News like this has started to excite age-group triathletes who have now begun to think about a few new equipment options for 2021.

Under normal circumstances, they would likely have considered the gear that podium finishing pros are using. Still, without any racing, this again has not been possible. However, thanks to unique events like the #LSHour that truly simulated a race-like experience for consumers; brands such as Canyon Bikes, Zwift, Gatorade Endurance, Garneau, HED, Skechers, Oakley, Freshii and more have become top choices with whom age-groupers will look to spend their money in 2021 and beyond.

In all, the unique nature of #LSHour gave Sanders’ sponsors a chance to demonstrate what they can do for athletes. They were part of achieving something inspiring, exciting and straight-up motivating. By analyzing this, there is no doubt his sponsors are extraordinarily pleased to have been involved in helping bring this entire experience to life. For Sanders, his team, his fans and for the sports of triathlon and cycling.

I think it is fair to say there is currently no platform that can compete with YouTube for viewership when it comes to long-form video content. Sanders and his team made the most of a tool at their disposal to seize an opportunity to engage an ideal target audience. Now, the #LSHour is easily consumable on a variety of devices. Most importantly, for Sanders and his YouTube channel, such a feat will open the door for future opportunities and for so many others to discover more about this dedicated triathlete.

It’s no surprise that other pro triathletes have also found success with a similar approach. Pros Tim O’Donnell and Mirinda Carfrae keep triathletes entertained frequently through their excellent YouTube channel known as “The Tim and Rinny (& Izzy) Show.” Others such as multi-talented triathlete couple Eric Lagerstrom and Paula Findlay are diversifying and equally doing a fantastic job building up a following through their YouTube channel and the recent launch of triathlon lifestyle brand “That Triathlon Life.”

During a time with little to no racing, you have to give credit to athletes like Sanders. He recognizes the importance of growing his brand while giving amplified visibility to sponsors through new and exciting digital content formats. The good news, things are looking upwards too. For triathlon, long known as a sport with little-to-no support for professionals in the field, the news that the newly founded Professional Triathletes Organization (PTO) had found some big financial backing in early 2020 makes it more realistic that the organization will be able to duplicate the work done by pro associations like the PGA in golf and ATP/WTA in tennis. That should become a great resource for triathletes to expand their brands and popularity of the sport in the future.

As many of us sit and wait for exciting racing to return, for now, let’s hope events and concepts like the #LSHour provide inspiration and better opportunities for those competing in a single athlete sports like triathlon. Still, until that changes, folks like Lionel Sanders are undoubtedly among the top when it comes to being an excellent example of driving value for sponsors during a pandemic.

If you haven’t seen it, enjoy the full #LSHour broadcast coverage here: