This story originally appeared in our May/June 2012 issue. At the time, Oakville, Ontario native Kyle Jones was busy preparing for his first Olympic games, London 2012. Fast forward nearly four years later and Jones finds himself in a similar situation. Last month, he told us he was feeling back on track after some disappointing races in 2015. Finishing off the year with two ITU World Cup podium finishes, it looks like Jones could be making his second consecutive Olympics as he prepares to secure a spot to Rio in the coming months.

For years they spent more time together, either training or at races, than they did with their wives. Since Simon Whitfield asked Kyle Jones to join him for a pre-Olympic training camp in 2004, the two had been training partners for seven years. Whitfield, of course, was the Olympic gold medalist. The man who always finished in front. That changed, though, last July when, at the Edmonton World Cup event, Jones finally finished ahead of his mentor – fourth to Whitfield’s sixth. A few weeks later he would finish ahead of Whitfield again at the World Championship Series (WCS) race in London – 19th to Whitfield’s 23. Was it finally his turn to shine? Had the mentor finally been passed by the student?

Hardly. Whitfield would go on to dominate their battle at the Canadian Triathlon Championship, winning his 10th national title and at the WCSfinale in Beijing Jones would end up pulling out of the race with a flat. Exhausted from his busy year of racing, he didn’t finish in Yokohama the following week, while Whitfield just missed the podium, finishing fourth. His overall results through the year, though, signaled to the 27-year-old Oakville, Ontario native that it was time to make some changes. In the fall he decided it was time to strike out in a new direction and started working with Joel Filliol, the man who guided Whitfield to his silver medal in Beijing.

“I wasn’t completely happy with the situation I was in,” Jones says. “Simon and I were training together and we were working with Jon Brown. I love the guy – he’s got a nice calm demeanor and is an Olympian himself (fourth in the marathon in Sydney and Athens) … just the experience he brings to the table as an athlete says a lot. Having said that, he doesn’t have a total triathlon background, so we were drawing from other resources. We had a swim coach we brought in and a cycling coach and were working with a number of people. To sum it up, it got complicated. For me, personally, working with Simon – we’re trying to do the same program … I felt like I wasn’t getting what I needed.

“I wouldn’t be where I am today if I hadn’t moved out to Victoria to train with him [Simon]. I beat him twice during last season … well, I want to keep beating him, in a friendly way. I needed a program that was directed around my needs. We’re very similar as athletes, but we’re also very different. He has a lot of natural speed, whereas threshold is more of my bread and butter. When I started working with Joel we started to do a lot more speed, which is something I wouldn’t have been doing if I’d stayed where I was.”

He’s quick to point out that he remains good friends with Whitfield, but in many ways the move was a clear signal 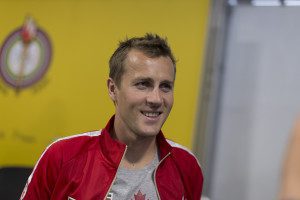 that Jones has come into his own as one of the world’s top triathletes. Ironically it was a potentially career-ending injury that led to the series of events that culminated in Jones finally gaining the confidence to go his own way. At the end of the 2010 season, Jones had surgery to fix a kink in his left common iliac artery, an injury that is becoming more and more pervasive in cyclists and triathletes. After spending six weeks flat on his back, he returned to training and racing, but his world ranking had dropped out of the top 100, which meant he couldn’t compete in any of the WCS events. Along with fellow national team member and 2004 Olympian Brent McMahon, Jones headed to Mexico and did a tour of a number of Asian world cup events to try and move up the rankings. The results were impressive – he won in Ixtapa, Amakusa and Weihai. Then, in July, he finally crossed paths with Whitfield again, beating him in Edmonton.

“That was a big eye opener for me,” he says. “When I started to trust my own instincts and following my own plan and had ownership in that plan, the results started to come.”

Growing up in Oakville, Ontario, Jones had been an excellent runner, and was striving first for a U.S. college scholarship and then, ultimately, for a spot at the Olympics someday. Since he’d been born he’d been surrounded by high performance sports because his father, Doug, is a former national and Olympic canoeing coach. As he neared the end of his high school career, though, he started to shift towards triathlon. In 2003 Jones won the national junior championship, then received that life-changing invitation to Whitfield’s pre-Olympic training camp in Penticton. Whitfield invited Jones to stick around after the two-week camp – he eventually stayed for the entire summer. He then moved to join his training mentor in Victoria.

It was Jones who would end up being the odd man out when it came to the 2008 team for Beijing. Two months before the final selection race, Jones suddenly put himself on the contender list with a fourth place finish at a world cup race.

“All of a sudden I had a shot,” Jones remembers. “I went to Beijing as an alternate. In the end a silver medal came out of it. I was disappointed in 2008. I believed I had a shot and that I deserved to go, but ultimately I didn’t meet the criteria then. No one made the criteria, so they were able to select Colin (Jenkins). It was an interesting time because Colin and I were very good friends and had trained together for the two or three years before that. We’ve remained good friends. It was a difficult time amongst the whole group.”

The experience has left Jones bound and determined to ensure he’s met Triathlon Canada’s qualifying criteria to be on the starting line in London this year. When he finished eighth at the first world cup race of the season in Moololaba, Jones also managed to move Canada into eighth in the team standings, which, if the team can stay that spot, will give Canada three spots in London.

After sitting on the sidelines in 2008, Jones seems destined to make that start line in London in August, but knows that to get there won’t be an easy task. That Olympic goal, though, is what fuels his desire to train.

“The Olympic dream – it’s a goal you’ve set from a young age. I just have this attitude that I won’t be satisfied until I fulfill it.”