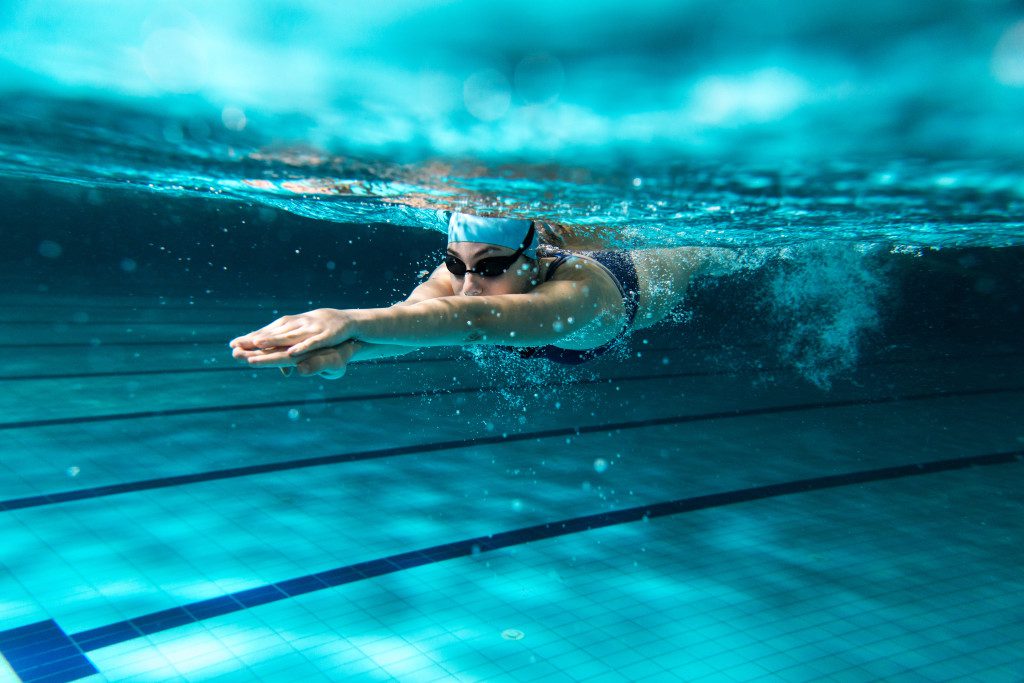 Even experienced swimmers know their swim stroke requires more technical attention throughout the year to maintain a good level of proficiency in the water. I’ve been a swim coach for 15 years, and I know that working on technique is not exactly “fun.” Despite that, a little commitment to work on technique every week will make your swimming experience more enjoyable and make you faster.

Here are a few of the basic principles you need to follow when it comes to swimming:

The basics: Breaking it down

Freestyle is the fastest and most efficient swim stroke in swimming thanks to the constant kicking and pulling phase, while also allowing the least amount of frontal and form drag compared to any other strokes. Keeping these two principles in mind you can slowly start to put together a great freestyle stroke.

From the side, the freestyle stroke needs to be in a completely horizontal position. The head is aligned in a natural or neutral position and in line with the trunk and hips. Too high a head position means your lower body will be too low in the water, and your hips will sink. The key is to keep your head and torso “flat” in the water with your hips and lower body close to the surface.

The back should remain relatively flat, with your core muscles slightly engaged, keeping your body in line. The flutter kick is very small, confined and completely hidden by the rest of the body when looking head on. Incorrect kicking can sometimes be a large contributor to drag.

Laterally, the hips and legs stay within the confines of the shoulders, and the body  moves as a unit in constant motion.

Quite a lot of work should be aimed at improving body position. I prefer to reinforce good body position frequently through kick drills that are best performed without a kickboard to promote proper body position.

2) Kick side. This is a good drill for engaging your core, the key muscle group used in the body roll when you finish the stroke and roll to the other side. I like to use this drill with about four to six beats of kick on one side, then, tanking one full stroke,rotate to the other side. Great for working on the timing with the catch and the body roll.

3) Kick with rotation. Another drill geared to fire your core muscles in the correct sequence. I suggest doing a few 50 m intervals with with 10 strokes of freestyle followed by six to 10 hip rotations (no arms, just kicking and rotating the hips).

The catch and entry are very simple, but for many swimmers this is the beginning of where things can go wrong. Once one arm phase of the stroke is complete the hand exits the water at the rear, next to the hips, which are rotated at a 45-degree angle in the water. The work has been done for this arm and now it is up to the other arm to do its share of pulling. The recovering arm lets the shoulder lead, and from the forearm down to the wrist the arm is very loose. Once the elbow and hand pull even with the shoulder, the hand extends forward past the head and directly in front of the shoulder to the point-of-entry where the hand enters the water. The hand immediately presses down on the water with the assistance of the forearm commencing the catch phase and causing the elbow to pop-up. Think of the hand being in-line with the forearm acting as the “paddle” in the freestyle stroke. The shoulder is internally rotated when the catch begins which puts the elbow up in position allowing more muscles to be engaged. Once the catch begins, the body rotates. When the hand begins the catch phase, the body is fully rotated on its side. Then, as the hand and forearm press down onto the water, the body starts to rotate around the arm. When the arm is directly below the body in the pull phase, the body is in its horizontal position again, but only momentarily as it rotates to the other side as the initial arm starts to move into to the body roll and finish phase of the stroke.

There is no hesitation and no break in the timing when freestyle is swum well. Timing is when the hands pass over each other in their various phases of the stroke. The timing point is when one hand is in the pull phase under the body and the other hand is in the recovery phase over the body. Optimal timing occurs when the hand passes over the shoulder and under the shoulder at the same time. This timing allows you to generate the most power and transfer the most momentum from the catch/pull phase to the finish/body roll or push/roll phase of the stroke. The kick is the constant engine in the rear that keeps the swimmer moving forward and well balanced in the water.

While there is a multitude of drills and different philosophies on freestyle swimming, we have to remember to keep it simple, to put in the hard work,  and realize that there is no easy way, but there is a right way.

Cliff English was Triathlon Canada’s 2004 Elite coach of the year and is a NCCP Level 3 Swim Coach and NCCP Level 4 Triathlon Coach.Cliff coaches some of the top triathlete’s in the country including Samantha McGlone, Melanie McQuaid and Kelly Guest. For 2006 he will be starting a new career as USAT National Team Select Coach.