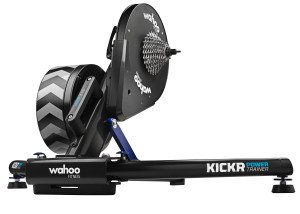 Triathletes tight on space will love how sleek the direct drive Kickr is, thanks to its minimalist frame and the fact that there’s no back wheel needed. Suddenly my apartment seemed bigger when I swapped the trainer I’d been riding in middle of my living room floor with the Kickr. While it does require a power source, there is only a single chord for the Kickr and it’s very tidy.

The bike connects to the trainer with a 12-27 SRAM/Shimano Cassette, allowing you to save in wheel wear and tear and removes the need for pricey trainer tires. Any extra time spent on this setup is off-set by the fact that the Kickr doesn’t require calibration – just start pedalling and you will hit that the real-road feel instantly. The direct drive allows you get the coast-down when you stop pedalling – just like on the road, so offers the most accurate and consistent power readings possible. I tested the Kickr’s wattage readings against those from my Garmin Vector pedals and found them to be really close, with the Garmin being about three per cent higher.

Whereas on some trainers, riding at a high cadence can help you ‘grab’ on to higher watts more easily, and so can affect perceived effort when moving from easy to hard watts, on the Kickr you will feel what it’s actually like to make those jumps in effort. This is thanks to the heavy, high-inertia flywheel.

Speaking of heavy, the Kickr, while slim, is quite heavy and slightly awkward to lift despite the legs that tuck in and its good-sized handle. Nonetheless, it’s user-friendly and the resistance unit moves up and down to accommodate multiple wheel sizes including 650s.

While it’s definitely a higher-end trainer, it’s worth the investment. As an Android user, my complaint about the Kickr when it first came out has been remedied with the recent introduction of Android support for the unit with their own app. Now the dual-protocol nature of both ANT+ and Bluetooth Smart enables it to communicate out to everything from Windows PCs and your Garmin Edge over ANT+, to iPad and Android devices over Bluetooth Smart so you can choose your training experience.

Wahoo has also launched a wireless cadence sensor with internal accelerometer that doesn’t need a magnet. This is useful as the Kickr only measures and transmits speed and power data. The RPM cadence pod works with iPhones and Android devices, and is ANT+ and Bluetooth smart compatible.