IRONMAN Canada, ever since its origin in Penticton, BC, has been a bucket list race for Canadian triathletes. The event began in 1986 and was first won by Dave Kirk (CAN) and Tracey Bell Kelly (CAN). Since then, 21 Canadians have won the race. In 2013 the race moved from Penticton to Whistler. The last Canadians to win the race are Trevor Wurtele (2013) and Steph Corker (2016).

IRONMAN Canada takes place in Whistler, on the edge of Garibaldi Provincial Park, a top tourist attraction year-round, with everyone from newlyweds to the adrenaline junkie. Here are our top destination spots you should visit after your race in Whistler.

The park is named after Mount Garibaldi, the 2,678-metre peak that towers over the region. The park is known for its natural beauty and endless hiking terrain. Located 70K from Vancouver and right by Whistler, Garibaldi is an excellent post-race destination place to relax and unwind.

Already have plans to stay in Whistler? Take your friends and family up Whistler/Blackcomb Mountain and do the PEAK 2 PEAK Gondola. The ride offers a 360-degree view of the region and at over 400 metres above the ground. PEAK 2 PEAK is the world’s longest unsupported lift span, stretching the three-kilometre distance between Whistler and Blackcomb Mountains.

The City of Vancouver

Are you leaving Whistler right after the race? Make sure to spend some time in Vancouver. Stanley Park has many hiking trails right downtown, as well as a 10-kilometre seawall. Be sure to also check out Yaletown, a hip area with cafes and restaurants. There is also English Bay, a spot where locals and tourists unwind during the summer months. Don’t forget about the suspension bridges in North Vancouver; Capilano and Lynn Canyon Park. These are just a few ideas, but Vancouver offers so much more.

Coastal Mountains, Seymour, Grouse and Cypress overlook the city of Vancouver. Whether you drive up, hike up or bike up, the views from these mountains offer some great pictures you can share with your family and friends. Not up for hiking up a mountain after the race? Don’t worry, Grouse Mountain offers a gondola ride up to the top. If the race wasn’t hard enough for you, do the triple crown and ride up all three peaks. 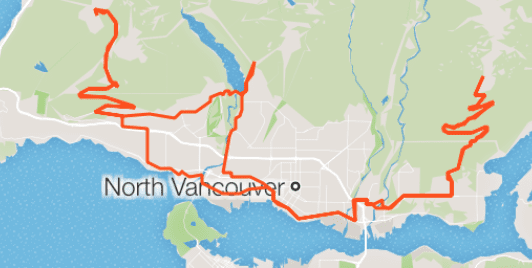 It is the southernmost major city in Canada, and also the capital of British Columbia. Victoria is easily accessible by ferry from the mainland, leaving from Horseshoe Bay and arriving in Victoria. The city is a popular tourist destination, as well as a triathlon hotbed. Many of Canada’s best triathletes have made Victoria their home training base. With its quiet roads, varying terrain and vast trail network, Victoria is a great place to check out for training and travel.

Once you’re on the island, you need to go to Tofino. It’s a bit of a trek, but you will be happy you made the trip. Tofino is a small town right on the edge of the Pacific Ocean and it offers some of the best surf in the world. Not interested in dipping your foot into the waters of the Pacific? Stay on a boat and watch pods of whales’ swim right by you.

After the race, make a trip into the Okanagan Valley and visit the birthplace of IRONMAN in Canada. In the Penticton, you can enjoy the refreshing water of Lake Okanagan, as well as Skaha Lake. The region is world famous for its vineyards, so make sure you make more than a few winery stops during your stay.

The Canadian Rockies have it all. Whether you’re looking to do some hiking, camping or switch it up and try out the fat tires, you can find your cup of tea in the Rockies. Tourist hotspots include Jasper, Banff, Lake Louise and Canmore. Each spot offers a unique feel and numerous outdoor activities for the whole family.