The dreams of competing in the Olympics was sparked in John Rasmussen at a young age, and his passion landed him on podiums around the world. Like many athletes, there have been setbacks, but after an assault while cycling, he has worked even harder to overcome significant challenges to keep that dream on target.

Rasmussen grew up in Hamilton, Ont., and loved all three sports before his first triathlon in Leamington, Ont., in 2000. The nine-year- old placed second and, over that season, “repeatedly encouraged” his parents, Kim and John, to drive him down to Windsor for the Kids of Steel Provincial Championships. They did make that long drive and he placed first. It was the same year that triathlon made its debut at the Sydney Olympics. “Watching Simon Whitfield win later that summer was a huge influence on me as a young athlete and showed me that there was a chance for a Canadian outside of the hockey rink and on the slopes,” explains Rasmussen.

Related: VIDEO: An emotional debut for Rasmussen at WTS Montreal

His sister, Sarah, loved the sport, too, and the family camped many weekends while following the series of competitions. “The atmosphere was good and there was always someone who was faster than you, to inspire you to exceed and do more,” Rasmussen recalls. As he moved up to the junior level, he began competing across Canada. “I wasn’t the strongest person growing up, but I just kept plugging away at it all,” says Rasmussen. He also wasn’t the tallest back then. At just 5’4″, he started the kinesiology program at McMaster University and was mistaken for a high-school student. But a painful growth spurt of almost one foot over the school year made him the tallest on the varsity cross-country team instead of the shortest.

Partway through university, in 2011, Rasmussen began racing professionally, and it was incredibly challenging to balance all of his commitments. “But, if you’re super passionate about something, you will find the time to make it work,” he believes. His parents had instilled a strong ethic around homework and workouts and those time-management skills helped.

While training in British Columbia in 2012, Rasmussen had the amazing experience of living at Simon Whitfield’s house while the veteran triathlete prepared for the London Olympics. “It was an incredible honour and privilege, and something that I will certainly never forget,” says Rasmussen. “His meticulous process and mindset that he brought to each session is something that I have tried to emulate and craft into my own training.” 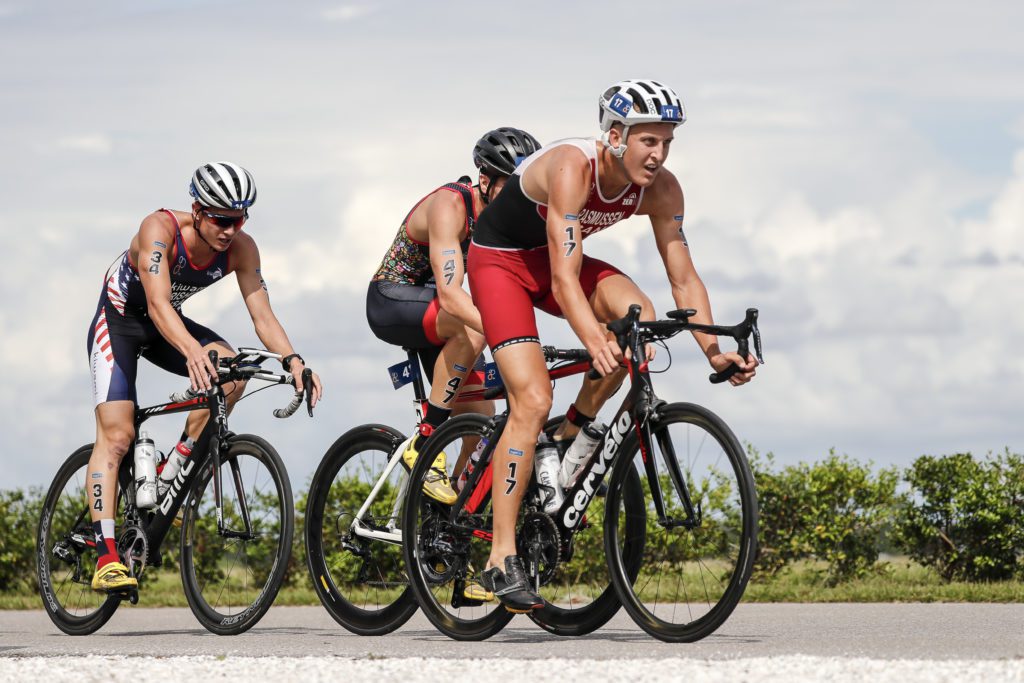 But, in the autumn of 2012, two events created a significant setback. First, there was jaw surgery to correct a shift in his teeth caused by that huge growth spurt. Then, when he was ready for his first post-surgery workout, things got a lot worse.

He was cycling with a close friend, Jordan Bierema, when a local man started telling them off because he thought they were using up too much of the road. After driving so close that his mirror grazed one of the cyclists, they all pulled off the road and there, Rasmussen was punched and knocked to the ground. The driver continued to hit him until Bierema was able to intervene.

“Just prior to being assaulted, I had started eating soft foods again following the jaw surgery, but I had to go back to a liquid diet because it was just too painful to open and close my jaw,” says Rasmussen. “Unfortunately, because I was hit several times, the nerves to my lower lip and chin have never healed properly, and I won’t have feeling in them for the rest of my life.”

“But truthfully, I consider myself lucky that I was with one of my best friends who saved my life that day. It was, and still is, difficult to go back on the roads on my bike, especially alone. I was really fortunate to have good friends and family around me when I was going through some tough mental and physical periods.”

He missed out on his last year of varsity swimming and running. “I needed treatment for a long time after the assault and honestly it is something I still deal with to this day,” explains Rasmussen. “My right scaphoid was broken, which took a really long time to heal in a cast and, ever since, has not been the same. On bike rides, my right hand tends to go numb, which makes shifting and holding my position challenging.”

He has learned ways to overcome that problem, but most amazing is his perspective of this awful event. “It changes you as a person,” he says. “You grow with it; you can’t let it define you. I have a lot of good people around me, a really good community, and I won’t let one person, who made a bad choice, define my life. You have to focus on the good people in your life and not let that one person impact it.”

After graduating from McMaster in 2013, Rasmussen started training with the Guelph Triathlon Project. He loves chasing his Olympic dream and sharing it when speaking to school children about the huge impact of triathlon on his life and balancing education with high-performance sport. “There is a way to be successful in sport and in life after sport,” Rasmussen explains, “and that is something that I like to share with the next generation whenever I get a chance.”

Since turning pro, Rasmussen estimates he has raced in 80 international competitions, including ones in Mexico, Ecuador, South Korea, Italy, China, Japan and New Zealand. He missed qualifying for the Rio Olympics in 2016, but attended the Games to watch his girlfriend, Geneviève Lalonde, compete in the steeplechase.

Shortly afterward, they were together in Australia, where Rasmussen competed in one of his most memorable races. At the famous Noosa Triathlon, he finished fourth, probably the happiest person to finish off the podium at the iconic race.

Another memorable race was his first-ever ITU World Cup event in 2018 in Barbados, where he won. “It was the culmination of a really big winter of work that showed me what was possible,” he explains. “It showed me that it is possible in the next two years to qualify for the 2020 Olympics.”

Both Rasmussen and Lalonde have their sights set on the Tokyo Olympics in 2020 and training will keep them apart for a good part of the year. But, after races in January, they spent a day at a water park “to just be kids again.” But these elite athletes couldn’t resist competing for the fastest time down the water slides and back up the stairs. With Tokyo in mind, Rasmussen’s coach, Craig Taylor, has strategized the priority 2019 races to be the Montreal WTS and the Lausanne WTS Grand Final. There are other, lower priority competitions this spring in Barbados, Madrid and Italy and, hopefully, he’ll have time to train with the Guelph squad for as much as three months in total before November.

As a teenager, Rasmussen did not evaluate his performance against anyone else, but just kept trying to improve himself. Clearly, that approach is working as he gets ever closer to that childhood dream. “I’m just being a grown-up child,” he says, of his Olympic pursuit. That could be true, but along the way, this wise young man has developed a formidable determination to handle any obstacles in his way.

Helen Powers is a regular contributor to Triathlon Magazine Canada. She lives in Dundas, Ont.