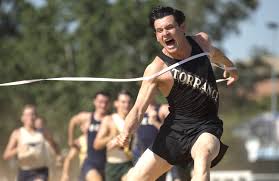 The latest film to join the running film canon,Unbroken is based on the life of Olympic track athlete and WWII veteran, Louis Zamperini. If screenwriters had complete creative license to make anything up, they could not have created a more heart-wrenching and awe-inspiring tale than that of Zamperini’s own life.

The film, directed by Angelina Jolie, is an intense two hours and fifteen minutes, flashing back in between Louis’ troubled childhood, being shipwrecked and stranded at sea and living in a prisoner of war camp. Between gun fights in the air, shark attacks at sea and the cruel reality of wartime camps, Unbroken is a guttural reality check on the strength of human will.

Jack O’Connell, who stars as Zamperini, delivers an unforgettable performance, snagging the National Board of Review’s award for breakthrough performance of the year. Runners in the audience will be interested to know that he actually took ‘running lessons’ to imitate the stride of the real Zamperini. They may also find it hard to watch as Zamperini, close to starvation and brutally tortured, is goaded by Japanese soldiers to race a healthy guard. 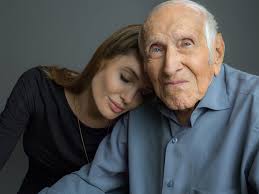 Based on Laura Hillenbrand’s book, Unbroken: A World War II Story of Survival, Resilience and Redemption, the film is rated PG-13, but viewers should be prepared for disturbing wartime content. Despite receiving mixed reviews from some film critics, both the book and the film should be put at the top of every runner’s, must-read and must-see list.