The women’s field in Ironman racing continues to explode in talent year over year and this season opens with an impressive lineup for the 2015 edition of Ironman 70.3 California. With three previous Oceanside winners and a long list of Ironman and Ironman 70.3 champions in the field of 35 pro women, the race is going to be fast and competitive. Among those 35 women are five strong and established Canadian women and a promising young talent.

Coming off a brilliant runner up finish at the Dubai Challenge event, Heather Wurtele is picking up the 2015 half distance season as she left it with her 3rd place at the Ironman 70.3 World Championship in Tremblant and looks ready to defend her title in Oceanside.

Wurtele commented on Dubai: “I was pretty stoked to race among the best and come away with the biggest pay-days I’ve ever had (even though I couldn’t manage the win)! It was an early season race but with the prize purse, the depth of the field, and the chance for the Challenge triple Crown, I definitely went into it prepared to do well. I really always race to win though, so I suppose the main difference is the training fatigue carried into an event (for example, if I do a 70.3 a couple weeks out from a full Ironman, it may involve what my coach likes to call a “no taper taper”).  I was super impressed with the whole Challenge organization, and I’m excited to do more of their races, so the Triple Crown is an important focus. I also want to do well at 70.3 Worlds and Kona, though, so my coach and I have structured the year a bit differently, with more of a midseason break to keep me fresh for later season races.” With that early season form she would certainly be considered a favorite for the event.

Wurtele is part of Paulo Sousa’s squad based in Poway, California which makes the Oceanside race a short commute. “It is definitely nice to have the race so close to where we train with the Triathlon Squad, and we have super awesome friends that always let us stay at their place in Oceanside so the lead up is pretty chill. There always feels like a bit more pressure as defending champ, but I try to look at it in a positive way – I’ve won it before so I can do it again! The race in Oceanside is always very competitive, and I love competitive races. When there are a bunch of women toeing the line with the potential to win, they bring out your best!” 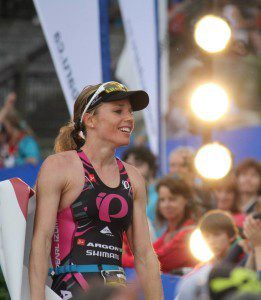 In 2014, Tisseyre suffered with injury for more than a year and struggled to find form and mental strength during that long recovery. She called Paulo Sousa in August to begin working together and in a short period of time earned a strong top-10 at the Ironman 70.3 World Championships. That led to two more wins on the 70.3 circuit before opening 2015 with an extremely impressive showing at Ironman 70.3 Monterey, taking the win in nearly four hours flat.

“It was a long drive down from Victoria, BC, but was exciting! The context here is ideal. It’s motivating to be training in a smaller group of people who are driven to excellence in the most positive way. I also really love the variety of training venues here. On long ride days or recovery days, I have been discovering new roads and trails with my boyfriend Eric (Lagerstrom) who has a sense of adventure that rivals my own. It makes the grind easier to handle.”

Tisseyre has a very positive mindset leading into this season as she pursues a top finish at the Ironman 70.3 World Championship. “I feel that what I have to do is just trust the training and not over think things. Just keep on taking care of business everyday with the squad. I need to keep on doing what I have been doing here, in my everyday routine. Keep feeling happy and confident. I also need to approach the season with confidence and zero fear of failure. Go race the big races and just get stronger racing the strongest. For Oceanside, my expectation is to lay out my best effort and see where that gets me. I want to be proud of my fight at the end of the day.”

Hot off her 3rd place finish at the 2015  Ironman 70.3 Monterey, Naeth is building on the momentum from 2014 where she won her first Ironman in Chattanooga and finished a very strong fifth at Challenge Bahrain. Having changed coaches for 2015 (she is now working with Jesse Kropelnicki) she is looking to contest all the big races in the WTC arena as well as upcoming Challenge events. This includes the Ironman 70.3 and Ironman World Championships.

Shrugging off any pressure, Naeth’s prognostication for the weekend was: “I shy away from expectations except one: give it what I have on the day. Can’t ask for much more than that!”

McBride finished 2014 on a high note, with a win at Calgary 70.3 followed by a top 10 at Ironman 70.3 Worlds. Over the winter, she made a coaching change, choosing to work with Canadian Cliff English for 2015. Starting her season preparation in January, Oceanside will be her first opportunity to shake off the cobwebs early season.

McBride had this to say about her decisions leading into the season. “At the end of last season, I felt it was time for a change in my coaching. I felt a good vibe from Cliff when I’d run into him at races last year. He also has a pretty stellar track record of successful world class athletes and a Canadian connection. We chatted over the winter and it felt like a really good connection, so we’ve been working together since January. Training has been incredibly smart since then. So far, so good!”

In 2014 McBride suffered a stress fracture in March, which delayed progress in her season until late. For this year she is trying a new approach. “Cliff’s guidance has been really smart in the past couple weeks to bring me up to speed and volume in a really conservative manner.” For 2015, McBride is looking to better her top 10 finish at the 70.3 World Championship in Austria and plans to add some of the Challenge events to her schedule.

Gordichuck is the youngster in the Canadian group. The 26 year old is based in Edmonton and is training with the Edmonton Triathlon Academy under head coach Kevin Clark. She is a relative newcomer to the sport and quipped: “This is the first time I’ve been asked for an interview regarding triathlon :)”

A former basketball player with University of Calgary, a torn ACL led to the decision to quit basketball and focus on triathlon. She says “It’s the hardest thing I’ve ever done but I love it so much. Right now I work full time at Big Als Aquarium and train around work but it’s worth it!”

Gordichuck’s 2014 season was highlighted by a National title at the Subaru Vancouver half and a fourth place in the pro female event at the Saskatoon 5150 chase event.

When asked about her preparation for Oceanside, Gordichuck had this to say: “Coming into Oceanside this year I am feeling a lot more prepared. I have been able to stick to a consistent training schedule because I have allowed more time for myself to focus on being a professional triathlete. I don’t have any big expectations for California, but I do expect to do better than last year (time wise) in swimming biking and running.” Wise words for a youngster developing in the sport.

(Note that I am actually talking about myself here… a bit awkward). I took the win in Oceanside in 2012, which I think speaks to the course suiting my strengths. With some of the fastest girls in the sport on the line it will be a true test of where anyone will be internationally, which is a great test early in the year. I took an extraordinarily long break last winter due to persistent illness, which may prove to be the best thing to happen, then made large changes in my approach to training. This winter has been excellent training with Kelly Guest’s junior elite triathlon group in Victoria, with an extremely heavy focus on improving my run. With three Ironman 70.3 wins in 2014, the main goal for 2015 was to address my run splits as I build towards my first Ironman race (Whistler). It has been incredibly motivating, fun and inspiring to work with a young and passionate group of ITU athletes under Kelly’s coaching. It makes a difference having a group to get the work done with and although most of my crew is between 16 and 20 years old, which fools me into thinking I am as well, I keep Sunday run dates with Danelle Kabush and Nick Walker to maintain some of the useful aspects of maturity. It is exciting to see how strong the women’s long course pros from Canada are this year and it will be fun to watch the year unfold. Go Canada!