Unless you’ve been sleeping under a pile of rocks, the ascendance of gravel riding and racing has been hard to miss. Gravel riding means enjoying the roads less traveled and reveling in the surprises along the way: Bald eagles gliding along a river, a “howdy” blast of a horn from a passing train, and more cows and sheep than people.

At the same time, riding gravel is incredibly challenging. Where triathletes talk of “getting in the zone” on the bike and cruising along on zone-2 training rides, gravel requires your full and undivided attention—an intimate dance between you, your bike, and the moving surface under your tires. You’re leaving the solid and predictable pavement for a constantly changing terrain, at one moment fine and powdery, the next pock-marked with crater-like ruts and mini boulders.

It’s not a stretch to say that gravel is the biggest trend in triathlon since, well, triathlon began. Angela Naeth, one of the most decorated Canadian long-distance triathletes, placed sixth last year in the world’s most prestigious gravel race, the 200-mile Unbound Gravel in Emporia, Kansas.

After her top-10 showing, Naeth said: “Gravel racing takes you off-road, riding through literally anything…the heat, the elements—I love that stuff, and I wanted to see if I liked the scene. I loved it.”

Related: Angela Naeth on the joys of gravel riding

Another of Canada’s stars, Rach McBride, has won nearly every gravel race they’ve entered, and is set to compete this year at Unbound. In 2021, they placed first in the non-binary division at the 103-mile Big Sugar (Arkansas, USA). “The course was unrelenting with technical descents, but my tip is to just get out and do it sometimes, regardless of having the ‘right’ equipment because gravel is a really welcoming community and you’ll find support,” said McBride. 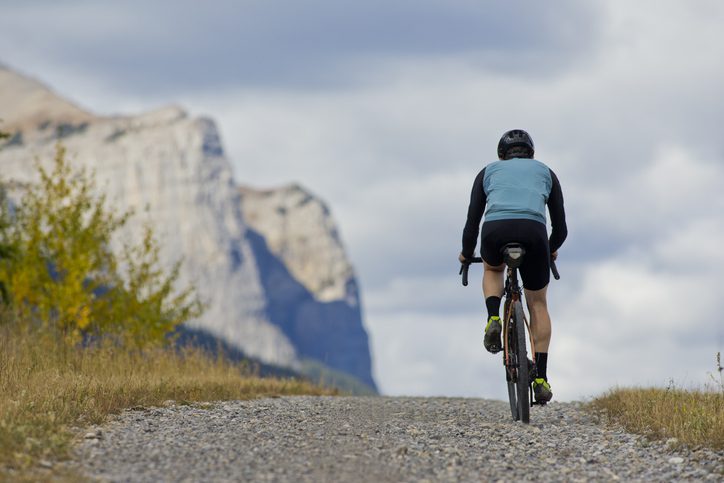 So why are triathletes flocking to dirt backroads? And should you join them?

A big reason, noted by both Naeth and McBride, is the community. It reminds some of the scrappy early days of triathlon, where everything was grass roots, everyone pitched in to help and cheered each other on. You’ll make 20 new friends at your first gravel event and find buddies to ride with every weekend.

While there are certainly serious front-of-the-pack gravel specialists out there, most athletes show up at gravel events to meet others and enjoy a full, challenging day in the saddle surrounded by nature, covered in dirt and mud with a beer in hand at the end.

Organized events, called “gravel grinders” typically feature routes and/or cue sheets for several distances, but triathletes may be surprised to learn that a “short” ride is around 50 km, ranging all the way to 200 km. And keep in mind you’ll be moving more slowly than you can on pavement. Where you might be used to zipping along at 35 kph on the road, you may average 20 to 25 kph, or less, on gravel, depending on the terrain. 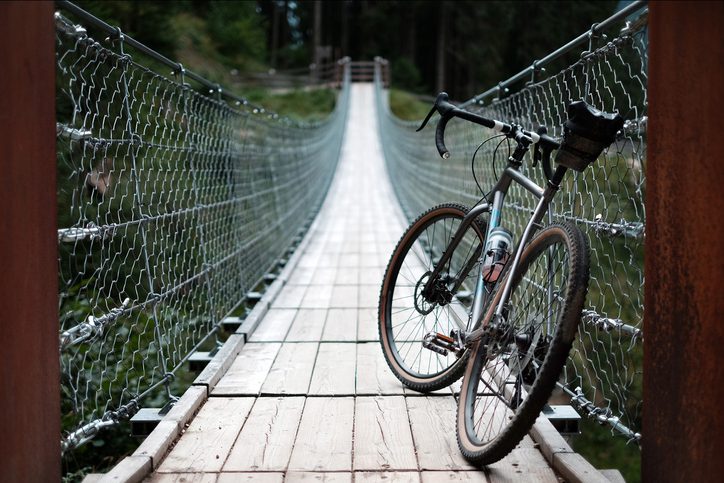 Gravel = Anything that’s not paved road

The first thing to know: “Gravel” isn’t one thing. It’s akin to “water,” where one word can encompass an enormous variety of types, locations, danger, beauty, excitement and so on. In short, “riding gravel” means “anything that isn’t a paved surface.” That encompasses a lot! Your ride could be as tame as a flat, packed dirt road, or as wild as big rollers spattered with baby-head-sized rocks and hairpin turns. Gravel riding starts where the pavement turns to dirt and ends where singletrack and mountain biking begins.

There are huge upsides to giving gravel a try.

About 60 per cent of Canada’s roads remain unpaved; that’s a lot to explore. The biggest obvious bonus is the lack of vehicular traffic. Instead of cars blasting by at 90 kph, you might see a slow-moving tractor or a farm truck out there.

How do you find gravel routes near you? Check Strava or MapMyRide.com to search for routes in your area. Check Facebook for local cycling groups, who may have a database of favorite local routes or may host gravel rides. Either way, it’s best to use a known route before charting your own course. On backroads, you’re more likely to hit a dead end, a washed-out bridge, or an intersection with a six-lane highway. That’s one reason seasoned gravel riders always have a good GPS-enabled bike computer.

>>Gravel riding will make you a stronger triathlete

There’s plenty of debate around whether cross-training – participating in other sports or fitness activities – is a benefit to triathlon training. With gravel riding, there’s really no doubt. This is sport-specific riding that involves your body and your brain.

Winner of the grueling 160-mile Chupacabra in Texas (comprised of a 100-mile morning race and a nighttime 100k gravel race), Marylou Bosveld credits gravel riding with making her a better road cyclist.

“Riding gravel has definitely made my road cycling a blast, and seemingly effortless, in that the same effort required to turn the cranks on gravel seems to propel my road bike into warp speed,” she said.

Gravel riding is simply harder: It takes more effort to turn over the pedals when you’re on a loose surface. Gravel riding is a built-in strength workout, plus you are using all kinds of stabilizer muscles that might not ordinarily engage when riding on smooth pavement. Cyclists that ride both often quip that 100 km on gravel is akin to a 100-mile ride on roads.

Perhaps the biggest surprise for new gravel cyclists, aside from the weirdness of riding on a loose surface, is that handling is very different from road cycling.

Gravel riding requires you to “choose your line” – to decide where the most traction is (generally where the car-tire tracks are). Cornering is a very different experience. Rather that cutting the apex of a curve, you’ll stay “on your line” when turning. On very loose gravel, shift your body weight away from the curve—more upright–rather than into it, while pressing your inside foot down and letting the bike track the curve. It takes practice!

Braking, of course, requires a much longer stopping distance, so you’ll need to be looking further ahead than you might on the road.

Descending is both harrowing and thrilling. To tackle a steep descent, you’ll level up your pedals at 3 and 9 o’clock, then hover just over your saddle, shifting your weight to the center of the bike with your hands in the drops and elbows soft. This distributes your weight over the middle of the bike, while hovering just out of the saddle allows the bike to shimmy and shift beneath you at speed. It is utterly unlike a road descent, and fantastically fun once you get past the initial fear factor.

Some mountain-biking skills, such as bunny hops, can also be useful in gravel riding. 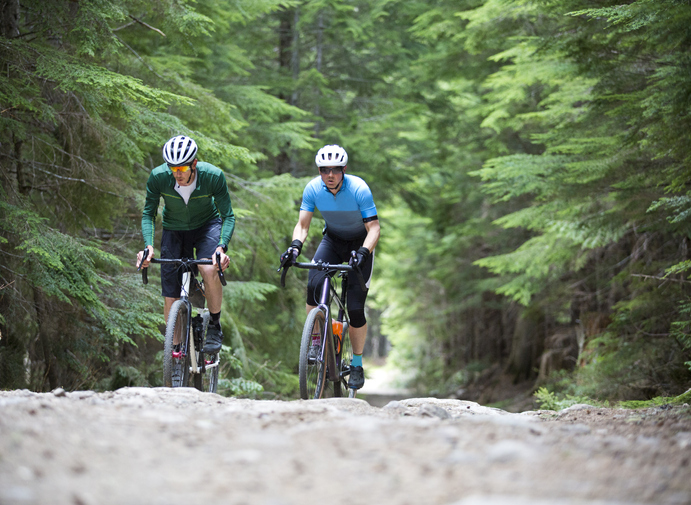 You’ll need a bike with wide tires that can grab loose road surfaces, but you might already have one that can be adapted. (See “Should Your Next Bike Be a Gravel Bike.”) A mountain bike works just fine, too. Or you can opt for a dedicated gravel or cross bike. You likely already have a helmet, bike shorts, and gloves. If you don’t have a GPS-enabled bike computer, you’ll want one, or you can use your cell phone for short rides. Back roads are sparsely marked, if at all, and there won’t be roadside gas stations to ask for directions.

Stick closer to home and practice your gravel skills before signing up for a 100 km gravel grinder. Build confidence on different terrain, practice lots of turns, and get used to descending. In many ways, gravel riding is safer than road riding: You’re traveling at much slower speeds and there are few cars. Skidding out and taking a fall will happen to you at some point but scrapes and a bruised ego will likely be the worst of the damage. Bringing some alcohol wipes and Band-Aids.

And before striking out on your own, track down a local gravel group to ride with. Gravel riding can be more fun and social than road riding, where you’re stuck riding single file on the shoulder of a paved road. On back roads, your group can take the whole road, yakking it up the whole time. With so much to explore, you won’t get bored anytime soon.

Gravel is one trend that’s not going anywhere.

This story originally appeared in the March, 2022 issue of  Triathlon Magazine Canada.