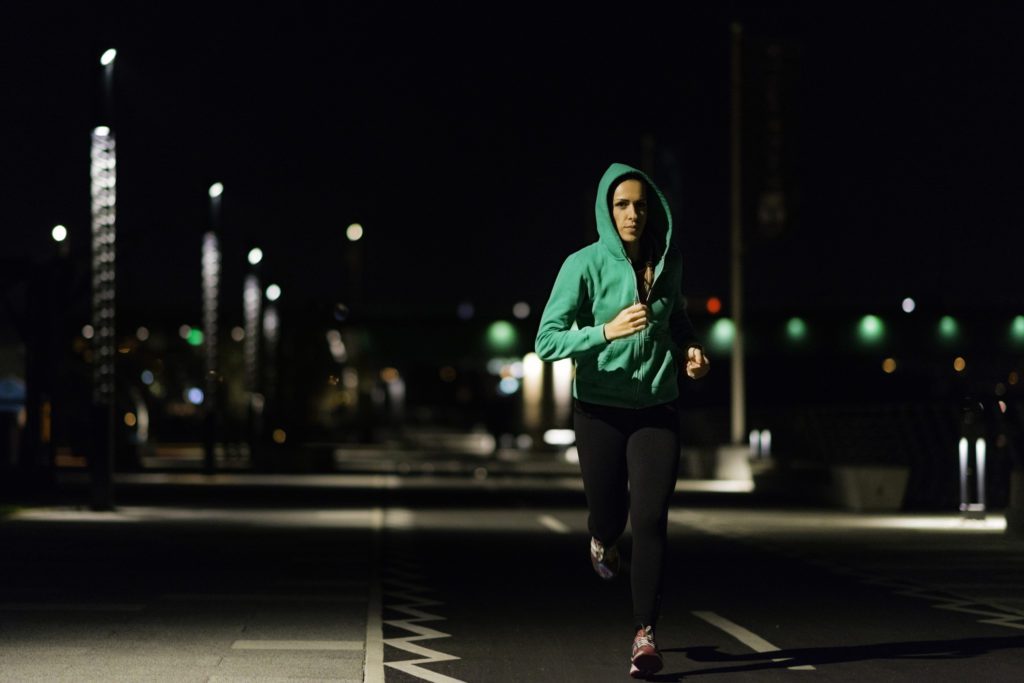 Night running is particularly hazardous. If you are wearing dark clothing on a dark night, the driver may not even see you until it’s too late. I was recently driving to work on a pitch-black Seattle morning and had just stopped at a stop sign. A guy wearing dark sweat clothes, completely invisible, walked across directly in front of me, talking on his cell phone, without even paying attention to me. He’d assumed that I could see him. Fortunately for both of us, I had just started rolling forward and had not gathered any speed, so was able to stop two feet from him. He was outraged until I pointed out that he was an invisible man, and that although he had every right to be crossing the road at this intersection, he could be right but he would still be dead or injured if I didn’t have good reflexes.

I also recall many times, when I was running at dawn or dusk, how angry I’d get when cars almost hit me. Then I noticed that the cars would swerve about 30-40 yards in front of me, just as the drivers saw me. It became clear to me I was not visible to the drivers until they were really close. This was back in the day before reflective vests were used widely by runners. Looking back, I realize that I was an invisible target just waiting to be hit.

Here’s some advice to avoid becoming a night running statistic with your local Department of Transport. Wear a large runner’s reflective vest when running at night, dawn, or dusk. And have you ever considered wearing your reflective vest when you run in the daylight? Anything you can wear that will make you more visible when you run will improve your safety. Reflective safety items include headlamps, leg bands, arm bands, hot spots, safety lights, illuminated hats and caps, etc. There are many different brands of reflective vests and apparel. A relatively new development in reflective vest technology is the Light Emitting Diode (LED) vest, with 500 candlepower reflectivity, that can be seen from 1,200 feet away. Caution: despite all this high tech reflective gear, under certain conditions (fog, rain, looking into the sun) drivers will still NOT be able to see you-so never assume that wearing reflective clothing will guarantee your visibility to an oncoming driver

Some golden rules for running at night

Roy Stevenson has a master’s degree in exercise physiology and coaching from Ohio University and has coached hundreds of serious and recreational runners and triathletes in the Seattle area. As a freelance writer, Roy has over 200 articles on running, triathlons, sports, fitness and health published in over sixty regional, national and international magazines in the U.S.A, Canada, England, Scotland, Ireland, South Africa, Australia and New Zealand. To view more of Roy Stevenson’s running articles go to www.Roy-Stevenson.com