We might be looking at another summer without racing here in Canada (here’s hoping that’s not true …), in certain parts of the United States races are happening – last week Ironman 70.3 Texas took place in Galveston, while yesterday we saw athletes compete at Ironman 70.3 Florida in Haines City, which is just outside of Orlando.

Here are a few of the things we noticed from the race:

Jackson Laundry is as fit as we said he was

Last week we commented in our “takeaways” that Jackson Laundry (pictured above on his way to the win at the Canadian Pro Triathlon Championship last year) was in great shape and would have been in the mix were it not for a flat. (We also pointed out he did have Pit Stop with him, but unfortunately the nozzle didn’t work with his disk wheel, in case you are, like me, one of those people who can’t understand why some pros don’t take a spare – he did, it just didn’t work.)

In Florida Laundry proved us right, having a spectacular swim that saw him come second out of the water. While his run wasn’t at quite the same level as last week, he still put together an impressive race that saw him finish fourth overall. Considering the men who finished ahead of him have been a runner-up in Kona and have a Challenge Roth title to their name (Bart Aernouts), the fastest man ever at the Ironman distance and multiple Ironman North American champion (Matt Hanson) and the defending Challenge Roth champion (Andreas Dreitz), it’s fair to say that Laundry was in some heady company at the top-end of the field in Florida.

Things are looking very good for Great Britain’s Emma Pallant these days, who got married in January (she goes by Pallant-Browne on some of her social media, Pallant in the results) and now lives in South Africa. As you can see from the above Instagram post, she’s struggled with heat and humidity in the past, but handled that just fine yesterday in Florida. She also had an impressively all-around performance that saw her second out of the water, take the lead early on in the bike, and never look back.

Pallant is on the start list for Ironman 70.3 St. George, the Ironman 70.3 North American Championship, and her performance in Florida certainly makes her one to watch there.

No less a cycling expert than Lance Armstrong used to love that quote, knowing full well that unless you could back up a dazzling bike ride with a solid run, you weren’t likely to take the win – something he learned very quickly during his brief comeback to triathlon in 2012 after he led off the bike at a few races, only to be passed by more experienced (and all-round) pros.

Super cyclists Andreas Dreitz (GER) and Magnus Ditlev (DEN) both flew to the front of the race early in the bike and appeared to be on track to start the run with a huge gap on the rest of the field. In the end they came off the bike three-minutes ahead of eventual winner Bart Aernouts. Dreitz quickly dropped Ditlev (who eventually dropped out), and despite the fact that he’s a solid runner, wasn’t able to hold off the fast-running Belgian.

Here’s where the “to a point” comes in – Aernouts wasn’t that much slower than the two bike learders. He trailed Dreitz by about two minutes after the swim, but kept his losses down to a minute on the bike, which put him in a position to take the day – he’d made up all three-minutes of his deficit by 16 km, giving him 5 km to cruise to the finish line.

Anyone else trying to figure out how popular the races actually are in the US? Based on what we can figure out from the results posted on the Ironman.com website, it would appear that there were 1,446 registered for the race. It looks like 209 of those didn’t actually compete, about 14.5 per cent of the field. 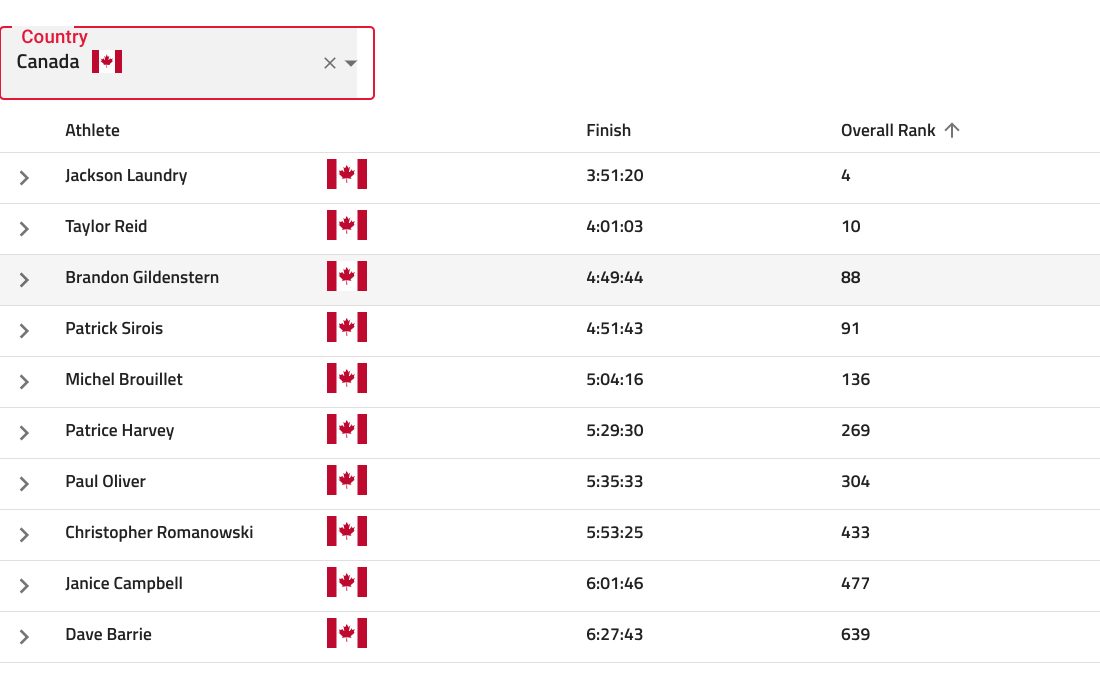 Canadians in the race

There were 19 Canadians registered in the event, with 15 of those competing. In addition to Laundry, Taylor Reid took 10th in the pro men’s category, Patrick Sirois finished third in the men’s 50-54 age group and Jennifer Knowles took third in the 65-69 age group.