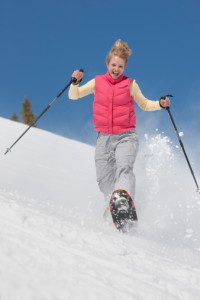 Much of eastern Canada may be in a deep freeze but winter triathlons are underway and can be a great way to keep you motivated. Additionally, they tend to include snowshoeing and skiing, so change up your standard triathlon training routine. This can give athletes the chance to “race” with less pressure while still getting that  competitive charge.

On January 25, the 2nd Annual Bushtukah Frost & Fire Triathlon and Run takes place in Wakefield, Quebec. The triathlon consists of 2.5 km Snowshoe run, 9.5 km Cross Country Ski , followed by a 5 km run in a gorgeous setting of woodlands and rolling hills. The individual or team relay event is timed by Sportstats.

Following last year’s race, Ottawa-based elite triathlete Jamie Stephenson joked to CBC that the snowshoeing component was so hard it felt like running in a bad dream. “You are running hard but not going anywhere…As a runner, I thought ‘2.5 kilometres, that’s nothing.’ But I couldn’t believe it when I got to the first kilometre marker and I thought I was nearly done. I was already dying at the point,” he said.

Last year Laureen Harper, wife of the Prime Minister, competed the event as part of relay team. This year’s race is sure to be cold and certain to be a blast. There are a number of similar events taking place across the country all winter long.