The sale of Ironman to China’s Wanda Group was the biggest news story of the year, but what were the other news stories that top the list from 2015? Here are a few of our picks.

In November it was announced that two Wanda companies, In Front and Ironman, would be merged to create a new company called Wanda Sports.

It’s still too early to know how exactly this will affect athletes, especially those of us here in Canada, but you can certainly expect Ironman’s expansion to continue. This fall a number of new races were announced in both North and South America, along with a number of new races in Asia, too. That growth will no-doubt continue over the next few years.

The big news on the Challenge front, though, came last week when we learned that Felix Walchshöfer, formerly the CEO of the Challenge Family events, gave up that position so he and the rest of his family (sister Kathrin and mother Alice) could focus on Challenge Roth. That will leave Zibi Szlufcik to head up the Challenge series from here on in. Like Ironman there’s been a flurry of race announcements coming from Challenge of late. How these recent changes will affect the company and its growth will be interesting to see through 2016.

While he didn’t earn himself a million dollar bonus, Jan Frodeno’s year will certainly help his bank account. The German fulfilled the long distance promise he showed last year by dominating in all of his races throughout 2015, taking both the Ironman 70.3 and Ironman world titles in style. His win in Zell required he beat Javier Gomez and Sebastian Kienle, two of the sports greatest athletes, then he did it all again five weeks later. 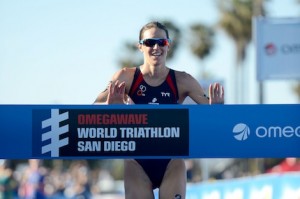 Anyone care to bet against Gwen Jorgensen in Rio next summer? Yeah, we wouldn’t, either. When the American took the WTS series title with her win in Chicago, it was her 12th consecutive WTS win. She got to round her year out with a big payday win at the new Island House Triathlon in the Bahamas (which, one might argue, was its own major news story of the year).

There might not have been 50 pro women on the start line in Kona this year, but the 50 Women to Kona initiative certainly helped raise awareness around the issues of women’s participation in the sport. Ironman started a Women for Tri initiative early in 2015, and other organizations like TriEqual have been making their voices heard in the quest for more women’s participation in the sport.