Remember when Jasper Blake was one of the country’s fastest Ironman athletes? We sure do! Today we look back at a story that appeared in our January, 2007 issue profiling Blake, who has now become one of the country’s top coaches and a regular contributor to Triathlon Magazine Canada. 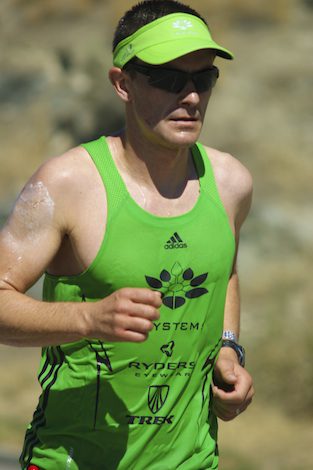 The indisputably talented Jasper Blake, otherwise known as “Jazz,” is racing better than he ever has.  At least part of the reason for that is that he doesn’t care as much about winning….

You could say that in August of this year, 33-year-old Jasper Blake was staring down one of the bigger crises of his life. It was the day before Ironman Canada and his career as an elite athlete was in question.

His fourth place debut in Penticton in 2000 had many predicting that Blake was the next big thing in Canadian Ironman racing. In August 2006, after some frustrating injuries and some big races that hadn’t gone as well as he’d wanted, Blake was wondering about his future.

“Maybe it was the end of my professional career… sponsorships depend on results,” he says. “And I hadn’t won an event yet this year. Coming second twenty times doesn’t help get sponsors. There was more pressure on that race than anything I’d ever done.”

As it turned out, Blake won Subaru Ironman Canada with little contest in 8:33:58, putting fourteen minutes between himself and second place. It was one of the greatest moments of his life.

“It doesn’t matter to me if this is ever a famous or a well known story, but I stepped up in a way that I’d always dreamed I could have.”

What made it happen for Blake? Two things. First, he was in the best shape of his life. More importantly, he says, he stopped caring about winning. While that might not seem to make sense for an elite athlete, it was the turning point for Blake.

“It wasn’t that I wasn’t going to try my hardest,” he says. “But I had a sense of peace going into that race. I no longer needed to win. My self esteem didn’t rely on it. I let go of my attachments. You have to keep your ego out of it – so you can try to observe the situation at hand without judgment.”

Blake pauses, laughs, “I probably sound like a cheesy self-help book. In traditional sports psychology, we visualize the result we want. I’ve never been into that – I think it’s crap. I think that’s the whole problem: we’re always so charged about crossing the finish line… but it takes you off task. ”

The statement is classic Jasper Blake. He’s focused, humble, modest, honest – even when his honesty reveals weaknesses or soft spots. Not something you see very often in professional sport, especially in interviews. It’s refreshing.

“Here’s one for you,” he says, “I won’t pretend and be macho about this: those last two miles of that race, those were the best two miles of my career. At that point I knew I was going to win, and I was like a kid in a candy store. I was so excited… But before that, I was really nervous, looking back, asking the media ‘do I have a lead?’  I had never been in that position, so I needed to hear it from someone I trusted. Paula Newby Frasier [who was helping along the course] just laughed at me and said ‘keep running! You could walk and be fine!’”

This year’s win in Penticton was one predicted long ago by the likes of Peter Reid. After his Ironman Canada race in 2000 he was on the up-and-up, a wunderkind. At that same event he placed second in 2003, then fourth again in 2004. He was injured in 2005, which left him questioning his future in the sport by the summer of this year.

It wasn’t for a lack of training. As Ironmanlive put it, Blake always “seemed to be a bike ride away from an Ironman win.” He was constantly struggling with injuries and for years he’d been having a hard time getting his head into the races.

Nor was it for lack of talent. Blake was no stranger to elite sport before his triathlon career. He has a lifetime of top level competition behind him. He went to the University of Wisconsin, an NCAA Division One school, on a tennis scholarship. Before that, from the age of six on, he trained and competed with the National Ski Academy.

“I’ve spent 32 years jumping around to different sports,” Blake says, “and I’ve thought about winning a big race forever. I’ve been close before. And it was as good as I’ve always imagined it would feel.”

Subaru Ironman Canada finally came together for Blake, he says, because he raced on his own terms. He’d put in some long hard months on the bike. Eight hours in the saddle, sometimes. He characterizes his training this year as coming from “a no-bullshit approach. Work hard. Put in your time, specific to what you want to accomplish.”

He pauses, “It’s a hard place to be [triathlon]. It’s absolutely ridiculous. In a lot of respects it’s a very silly sport. We run around in spandex and push ourselves to places that are so unnecessary. This is supposed to be a fun place. Tri can be way too serious.  I had to sort that out – that you have to be serious to be successful. That’s crap. You’ve got to be yourself.”

Here we see two other classic Blake qualities: he balances his utmost focus with his quirky sense of humour. Blake, affectionately known throughout the community as “Jazz,” is notorious for being a ham.

Case in point: during the second transition in Penticton this year, Blake had moved up from 12th to fifth. He was five minutes down, but knew at that point that he might win if he ran well: “I was certainly optimistic, but knew it was dangerous to get emotionally carried away. You can have a positive energy spike that is ultimately exhausting.” So, he brought himself back to the here and now by hamming it up with the volunteers.

He laughs mischievously, “when I go from bike to run I change completely – into full running gear. I get completely naked. And no one really wants to help the naked guy.  I almost cracked up in transition. The volunteers were all serious, asking, where do you want the sunscreen? I just piped up Everywhere! They didn’t think it was as funny as I did.”

Growing a little more serious, Blake mulls over his theories about winning and racing: “You know, I think what kept me in the game so long is that I never gave up on my dream – I’ve worked my butt off for 25 odd years in sport. But one promise I’ve always made to myself is that I will keep plugging away no matter what. I reached the point where I no longer needed to win, but I sure as hell have wanted to for a long time.”

Going forward, Blake has his sights set on a great finish in Hawaii next year and hopefully another Ironman win. Most importantly, he says, “I want to maintain a sense of humility, always, but never become complacent with where I’m at.”

It’ll be a busy year. On top of his training, he’s also a National Spokesperson for the MS Society of Canada – Blake’s mother was diagnosed with Multiple Sclerosis in 1992. Plus, he organizes a program called “Adopt an Athlete,” where elite athletes form long term relationships with teachers and students. He, Simon Whitfield and Stefan Timms run a program called Triathlonschool, a mentoring program for Canada’s young triathletes, one that Blake says they created to forge links between athletes and Canadian charities, but also to bring a stronger sense of community to Canada’s triathlon scene.

Blake should definitely have the last word in this profile.  He’s too funny not to.

Here’s a poem Blake posted on his buddy Whitfield’s blog: Triathlon is a silly sport/ Don’t matter if you’re tall or short/ Don’t matter if you’re thick or thin/ Spandex stretches…..we all fit in! /There’s ITU and WTC/ Eye to eye they never will see/ But who really cares who runs the show/ Nobody seems to pay out that much dough/ We swim every day, we bike a lot too/ This poem is lame and doesn’t rhyme anymore…