In the middle of summer, triathletes are likely sick of the stinging sunburns and hazards of sun damage. That’s why TMC is bringing you a review of six basic sports sunscreens along with a crash course of taking care of skin. 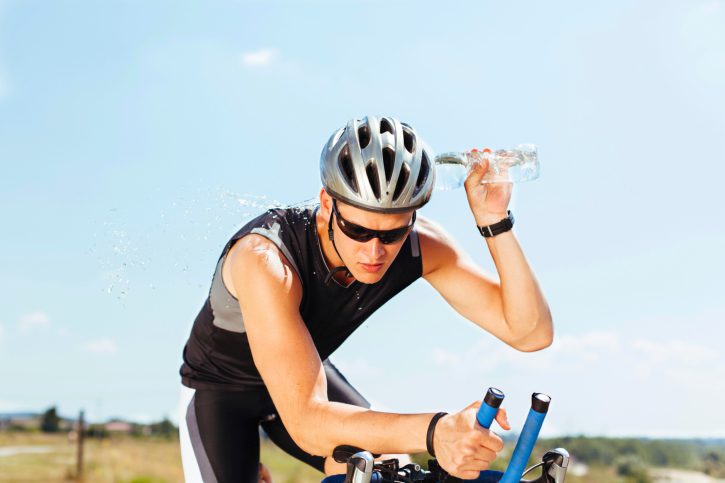 Here we are in late July. At this time of year, triathletes are reaping the rewards of being able to train without bulky layering and enjoy scenic views of favourite cycling and running routes. Every season has its challenges though and in summer, sun damage is a big one. Since triathletes spend so much time outside, finding the sun protection that works best is key.

When to wear sunscreen

Dr. Anne Curtis, dermatologist from Dermatology on Bloor in Toronto, says when going outside, people need to be wearing sunscreen every single day to prevent sun damage. Rather than just putting on sunscreen when the sun is most strong, she says it needs to be worn during all daylight hours to prevent damage. “It’s every ray of every day of your entire life. That adds up,” says Curtis. That goes for cloudy days too. Up to 70 per cent of ultraviolet rays come through clouds. And once it’s on, reapply. Especially when outside for longer.

Not only does sun damage speed up the aging process, but, as we all know, it causes cancerous cells on skin. “One in six gets basal cell. It tends to occur on the face,” says Dr. Curtis. She says that while most people assume wrinkles just come with age, they actually are signs of damage from the sun. “Sunscreen is the best anti-aging cream there is,” she says.

Shopping for a product

Convinced to start using lotions and sprays more regularly? Great. “The easy thing about sun protection is that it’s not a mystery,” says Dr. Curtis. So what do you look for? Curtis says to buy protects with SPF 60. When considering sun protection values, cut the number on the bottle down to one third to get the realistic value. Why? The government standard of how much sunscreen to be used when testing is way more than what the average person actually uses. “They apply it with a spatula in a thick white layer that looks like mayonnaise,” says Curtis. “If they applied it as thinly as people use it, [results] wouldn’t be as consistent.”

When shopping for a product, another thing to consider is whether or not it’s been approved by the Canadian Dermatology Association. Not all sun protection products are created equal and that’s why the association has gone through those sold in Canada as part of their Sun Protection Program and listed which ones they approve of. When shopping, look for their logo on the bottle.

After that, it’s about feel. Triathletes want to like the product. If the user doesn’t like it, they won’t want to use it. When staring at bottles on the shelf though, it’s hard to know which one feels and smells the best and which one won’t run with sweat or sting the eyes. TMC put six common products through testing on the run. Below are our observations.

This spray felt the lightest out of all of those tested. Dr. Curtis warns against sprays since they can’t be applied as generously so this spray may need more reapplications. Sprays like this one are suitable for triathletes who need to hastily reapply in the middle of the workout and it won’t matter if this one gets on the clothes.

When worn on the face, we found it did not cause eyes to sting or tear up. The bottle advertises a refreshing cooling feel when applied. This was definitely true. Triathletes would appreciate that cooling feeling during a reapplication on a set break of a sweaty workout.

This one wins as the best face protection. Every triathlete should have this product in their race bag or by the front

door. Because it’s so tiny (it will fit in the palm of your hand) it’s so easy to pack into a pocket or your bike’s bento box. It goes on sheer and feels light compared to many sunscreens. Our tester had no problems with sunburn or having this product run into the eyes. Dr. Curtis suggests stick sunscreens for triathletes. “It has good protection and it isn’t going to be running,” she says.

Many sports sunscreens boast being non-greasy and sheer. This product did the best job at that out of the three lotions tested. It feels light on the skin, dries quickly and didn’t let our freckly tester get any sunburns. It comes in a small size (88mL) so it’s easy to bring for a long ride or run. However when worn on the forehead while sweating, this one did sting the eyes. This product has been recognized by the Canadian Dermatology Association.

The texture of this felt gluey and had to be rubbed in a lot more to get rid of the white tint. As far as protecting our triathlete from burns, this product did its job. It’s one triathletes could feel confident in in that regard, however we felt that it was the stickiest sunscreen of the lot and smelled like craft glue. This product has also been recognized by the Canadian Dermatology Association.

The bottle uses words like “cool dry,” “breathable,” “non-greasy,” and “micromesh,” making us think it would be the best sun care to come to endurance athletes. When tested, we found this product was surprisingly sticky and runny when it first went on. It may not be the best facial product as it did run into the eyes and felt a little oily on the face. It could be fine worn on the face of athletes who sweat very little. When worn on arms and legs though, it’s a trusty product. While it initially felt sticky, it feels better when it dries. We felt Neutrogena’s product had the best smell out of the three lotions too. The scent is helpful on those sweaty rides or runs. This Canadian Dermatology Association approves this product.