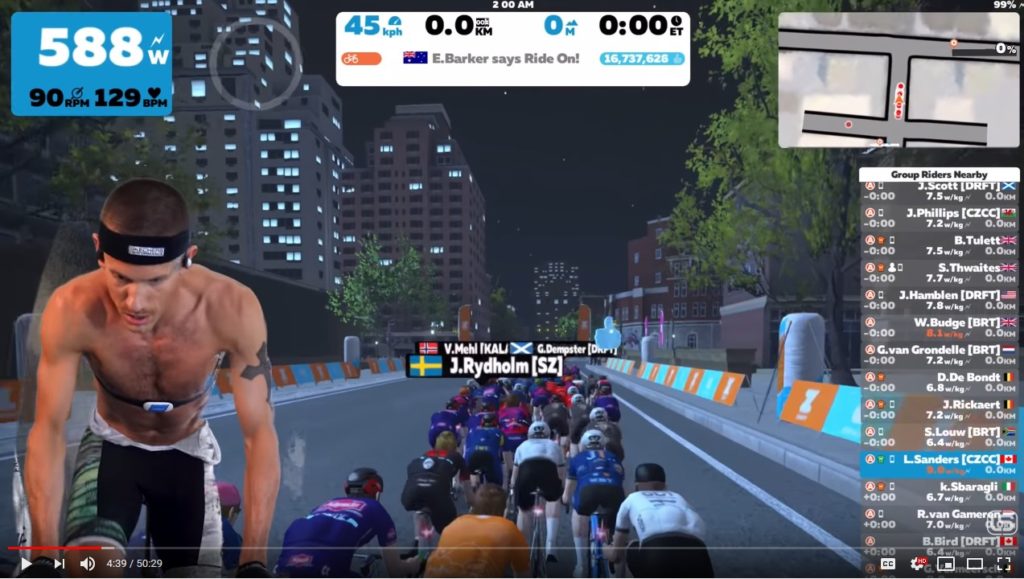 While Ironman introduced its new version of virtual pro racing this weekend, Lionel Sanders was competing against some of the world’s best cyclists in a virtual race on Zwift. The “Ronde on Zwift” race was contested over the UCI World Championship course in Richmond, Virginia, which included a cobble-stoned hill. The riders competed over three loops of the course for a total of 27.6 km.

Cycling star Mathieu van der Poel was the featured pro in the race, alongside many members of his Alpecin-Fenix pro cycling team, taking on Sanders, other pro riders and Zwift specialists.

Sanders was part of a breakaway group, then pulled clear of the group into the last climb, opening up the gap by pushing a whopping 10 watts/ kg for a short time before to get clear, then continuing to pull away on the climb to open up a gap of over 20 seconds. He then managed to hold off the riders sprinting behind him to the line thanks to what he believes is a “life-time best 5 minute power” of 534 watts.

Sanders’ time for the ride was 36.21 and he averaged an incredible 401 watts (5.5 w/kg) for the ride. Second went to Sweden’s Samuel Brannlund. Sanders’ Canyon teammates Lionel Vujasin (BEL) and Ollie Jones (NZL). Van der Poel finished out of the top 10 in the race.

Sanders posted a video about the race on his YouTube site last night.

“That was the coolest experience I’ve ever had riding a bike,” Sanders says in the video. “I was really anxious about the first climb, I knew it was make or break … I don’t have huge power. Fortunately the stars aligned for me through the whole race. The attacks on the one minute climb weren’t super crazy …”

Sanders was able to hold 590 watts for one minute to stay with the bunch after that first climb. He set up the winning break with an attack at the start of the third lap and was joined by three other riders. Heading into the last climb Sanders made his move.

“The guys on my team told me ‘you could win this thing, but you have to go all out up the climb,'” Sanders says.

He did just that and his team mates were right.

Based on this success it will certainly be entertaining to see Sanders compete with other triathletes on Ironman’s new virtual platform. One would imagine we’ll see Sanders compete in other Zwift races, too, before the Coronavirus COVID-19 pandemic is over.