In our July, 2019 issue of Triathlon Magazine Canada, Loreen Pindera profiled the two men and their amazing journey to the world championship event in Sweden: 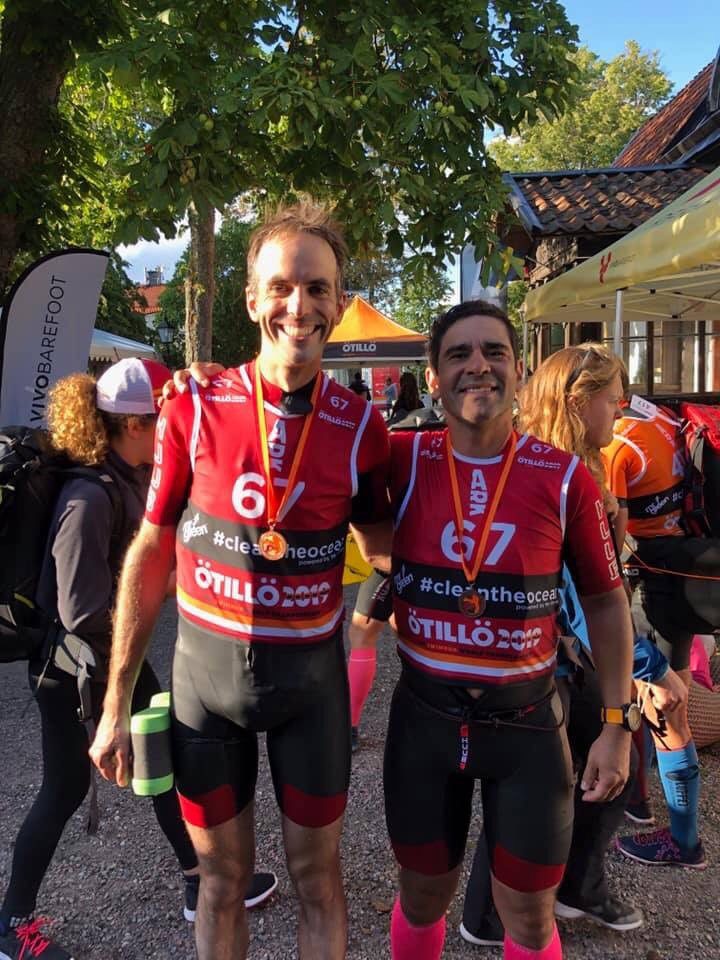 Were it not for triathlon, the two Olivers would never have met. Oliver Cordoba, 44, is a software engineer originally from Colombia. Olivier Girouard, 37, is a composer who grew up on a farm east of Montreal. Together, they’re training for one of the most gruelling single-day endurance challenges on the planet: the ÖTILLÖ Swimrun World Championship in Sweden, on Sept. 2.

Swimrun events are relatively unknown here, but in Europe, they’re all the rage. ÖTILLÖ, which means “island to island” in Swedish, has gained legendary status: after a late night of drinking in 2002, a hotel owner on Utö, an island in the Stockholm Archipelago, dared a buddy and a couple of his staff to swim and run to a small harbour town several islands away. They split up into two teams and set out — the only rule being that the last team to reach each of the three restaurants along the route had to drink whatever the first team had ordered for them and pay the tab. It took them more than 24 hours to finish.

Needless to say, the race, which officially began in 2006 with 11 teams, no longer includes bar-hopping, and now competitors have from dawn to dusk to make the cutoff. Last year, the Swedish team of Fredrik Axegård and Alex Flores smashed the record, finishing the 75-km course in 7 hours, 39 minutes and 29 seconds.

This is not a relay. The teams of two — men’s, women’s and mixed — have to stay together as they run over and swim between 24 islands. That’s 65 km of mostly unmarked trails and 10 km of cold Baltic Sea, with 26 transitions.

“When you get out of the water, there is no red carpet, like in Ironman,” says Cordoba, who’s done Ironman Mont Tremblant in 10:23 and completed the Xtri Canada Man/Woman twice. “You just try to find a path and start running.”

“When Oliver gets out of the water, he’s like a drunk,” says Cordoba’s partner, Girouard. “He’s stumbling all over the place. So, often, it’s me who is dragging him in the right direction.”

“Once he starts running, he’s a war machine. He is a little guy. He runs fast, and he’s sure-footed. On the rocks, he has incredible balance,” says the gangly Girouard. “I look like a scarecrow in the wind, my arms flying all over the place! But together, we manage really well.”

The pair met at YTRI, a triathlon club at the YMCA du Parc in Montreal’s Mile End neighbourhood, not long after Girouard took up running, at the age of 30. He was struggling with a difficult breakup and looking for a way “to get out of my head.” Except for playing pick-up soccer, Girouard had never been sporty. Then he did a treadmill stress test, and he blew away everyone at the gym.

“Suddenly I had an audience — all these people came to watch as I was giving it all I had,” he says, laughing.

It turns out Girouard was a gifted runner, but his first coach started training him as if he were an Olympian, and the neophyte got hurt right away. He dialed his training back a notch but kept running, clocking a respectable 3:30 in his first marathon. Within three years, he ran 2:52 in Toronto, and he was swimming seriously for the first time since childhood.

“I wanted to be a competitive swimmer when I was seven or eight, but the doctor advised against it because I have a heart murmur,” he says. “At the time, they didn’t know much about the impact of sports on a murmur, but really, the only thing I can’t do is weightlifting — anything that makes the veins in your neck bulge from sudden effort.”

Two years ago, after finishing his first Ironman at Tremblant in 10:15, Girouard and a friend decided to do the Amphibious Challenge, Canada’s original swimrun race in Sheenboro, Que., on the Ottawa River. But Girouard was faster than his teammate, and that proved frustrating.

“It’s not much fun to do it with someone not at the same level because one of you is always waiting, and the other is always dragging behind,” Girouard says.

Unlike Girouard, Oliver Cordoba — who spent his childhood on the edge of the Amazon jungle, in a town without a pool — didn’t learn to swim until he was 18, when he went to university in Medellín and managed to make the swim team. What Cordoba lacks in technique, he makes up for in speed and pure doggedness.

After his XTRI experience and several ultra runs of increasing difficulty, Cordoba was up for a new challenge.

“I talked to Olivier and I said, ‘Why not register for a big one?’” he recalls.

The “big one” was the Casco Bay Islands swimrun in Portland, Maine last August — a 21-mile (34-km) event across and between nine islands. It begins with a pre-dawn ferry ride to the race start.

The Olivers arrived in Portland the night before the race, five minutes before bib pickup closed.

“Olivier is an artist, and I am an engineer — but we have a lot in common,” says Cordoba. “We are not easily stressed. This is good, but it is also not good.” 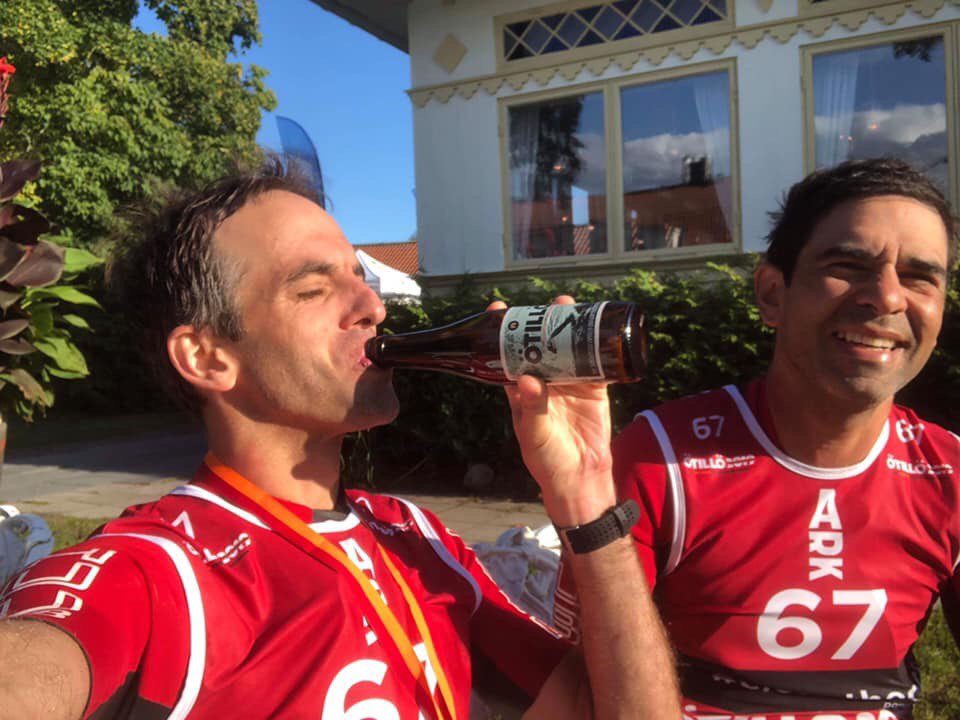 Neither of them had read the swimrun rules. They knew they needed a shorty wetsuit and they’d be swimming in shoes but didn’t realize there were a few other mandatory objects: a whistle, an emergency first aid bandage, and a three-metre cord to attach to each other in case of trouble in the water.

“We arrived at the registration desk, and they said, ‘If you don’t have a cord, you cannot race,’” Cordoba says. “We looked at each other and said, ‘What are we going to do?’ We tied the strings from our clothes bags together and said, ‘Look! We have a cord!’”

Early the next morning, with a borrowed whistle, a makeshift bandage and a proper cord, they were at the start line. Nothing could prepare them for what lay ahead.

“You start running across this little island, and then you come to a boat dock that’s three metres high — and you just leap off into the unknown and hit the cold water of the Atlantic,” says Girouard. “It’s out of this world. It’s just sick!”

“Adrenaline helps,” says Girouard. “You don’t even notice it.”

“There are no transitions in swimrun. You are like a human amphibian: you get to the water’s edge, and you just keep running.”

“You don’t get to sidle up to the shore and dip your toes in, and say, ‘Oh, the water’s too cold. I’m not sure I want to go in.’ You just go. And when you get out of the water, it’s the same thing.”

Despite their lack of preparation, the two Olivers ended up placing 11th. Two months later, in North Carolina’s Hanging Rock Park, they bettered their previous effort and placed seventh. Those two race results gave them enough points to qualify for the world championships.

Some teams will spend this entire summer in the Stockholm Archipelago, planning routes, practising water entries and exits. A swimrun requires you to think ahead, Cordoba tells me: consider the currents and pick your headings carefully, swim around seaweed and decide whether to pick your way over slippery rocks or clamber up a cliff.

The Olivers can’t afford the luxury of a Swedish training camp. Both work full-time. Cordoba’s tendency is to train too hard and sleep too little. Girouard crams training between the many electroacoustic music projects he’s juggling. For months, the pair has been adding volume to their training, little by little. In early May they ran a 50-mile endurance race in Bear Mountain State Park, N.Y.

“But you can’t run an 80K race every weekend,” says Girouard. “You’ll just exhaust yourself.”

The Olivers’ plan for the summer is a series of “shock weekends” — doing the whole 75K swimrun distance over the course of two or three days, every few weeks, “just to show your body what it’s in for,” Girouard says.

They share the same attitude about competing at ÖTILLÖ.

“We’re really just seeing this as a great adventure,” says Cordoba. When they swim, they joke around and encourage each other, singing along to the Latino hit, La Casa Latina.