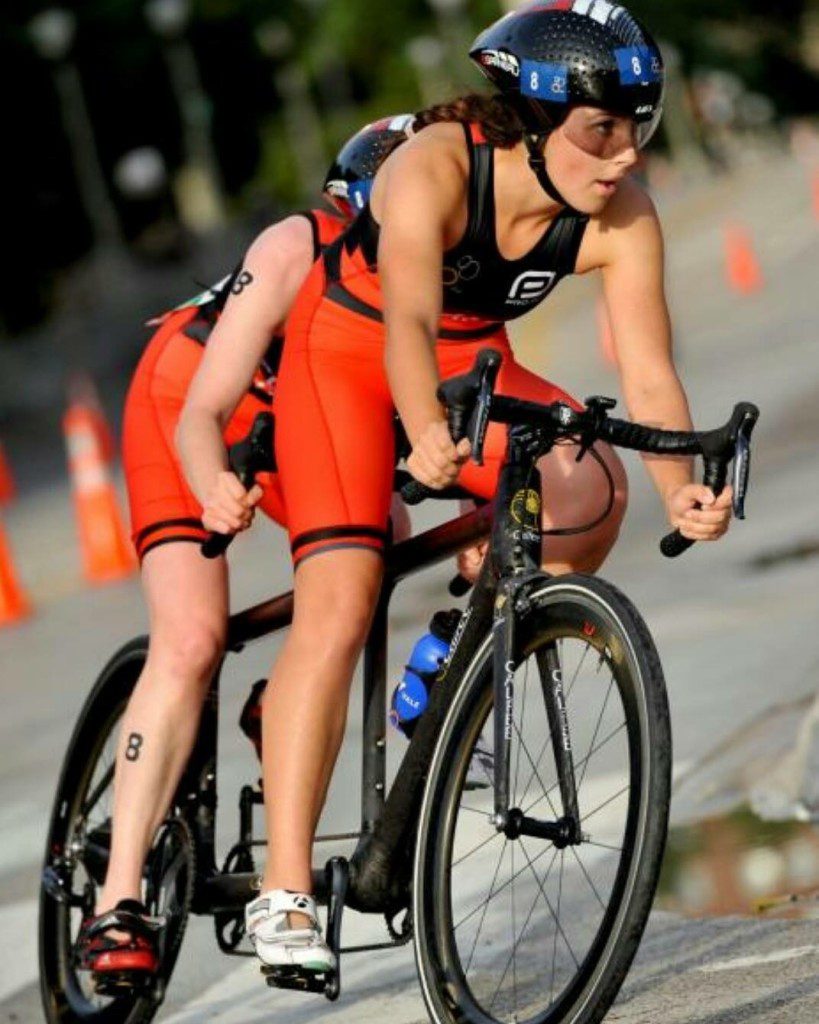 Sasha Boulton found triathlon at a young age and hasn’t looked back since. Competing at a high level in her teens, she dreamed of making it to the Olympics. When she was sidelined from a budding career as a pro triathlete after an injury, that dream seemed dashed. Now, she’s close to making it to the 2016 Rio Paralympics as a guide for visually-impaired athlete, Christine Robbins.

Robbins has been a runner all her life. After attending her first training camp for paratriathletes, she stuck with the sport because of its challenge. Her goal from the beginning has been to race as an elite and she hopes 2016 is the year she makes her paralympic dream come true.

Boulton decided to pursue triathlon seriously in her teens. Things were going well until a training camp in California a few years ago. She developed a bulging disc that put her out of the sport for a 13-month recovery period. When finally able to start training again, the most she could handle was a one-minute-on, one-minute-off run. It felt like she was starting from scratch. She was disheartened to learn from doctors that she would never be able to complete an Olympic distance triathlon again.

Robbins was in search of a new guide in 2014 and her coach reached out to Boulton, who fit the ITU guide requirements. With her background in the sport, she would be fast enough to keep up with Robbins. For paratriathletes seeking a guide, finding someone who matches the criteria, is a good personality fit and is fast enough can be difficult.

Boulton was excited to race again at a high level and traveled from Guelph to meet Robbins in her hometown of Ottawa that year to discuss the possibility. At the time, she didn’t know what her role as a guide would entail. She had to learn the rules quickly because they would compete in their first race together just a few months later. Boulton, a student at Guelph University, was finishing up a term at school so their May 2014 race in Mexico was her first time to really learn everything.

Though they went into the race without any expectations, the pair managed to take third. “I knew after that race I wanted to continue,” says Boulton.

Competing as a pair takes special trust in each other and requires lots of communication. Robbins says the swim is difficult for her generally, but having Boulton there to sight makes it easier.

They agree that the bike is one of the most challenging aspects of a race. “It’s always a bit nerve-wracking. Riding a tandem can be difficult because there are so many technical aspects,” says Robbins. For her, the run is where she excels. “It’s freedom. I’m in control and really, nothing can go wrong,” she says.

The two are close to making it to Rio. The top seven paratriathletes in each category qualify and right now, Robbins and Boulton are in eighth place. The best way to secure one of those seven spots? Win their next race in March. Robbins is confident it could happen and Boulton agrees. “We have been working hard all winter,” she says. “I think we have a good shot.”

For Boulton, becoming a guide has helped her fall in love with triathlon all over again. “Christine has to cross the finish line first in the race. Watching her cross gives me so much joy. I love being part of a team.” Robbins agrees that the two make a great pair. “Sasha has this great, young energy and enthusiasm,” she says. Despite the distance, the two are able to get together in Ottawa to train often, which has been a key ingredient in their success so far.

Robbins says she is constantly in awe of the support system — volunteers, friends and family — helping her reach Rio. As of this week, that support includes Triathlon Ontario and the Ontario Athlete Assitance Program’s Quest for Gold, which both Robbins and Boulton have been nominated for.

The pair don’t look to be slowing down after Rio. “I’m thinking about a half distance race down the line,” Robbins told TMC. Until then, 2016 looks like it’ll be an exciting year for them.