Triathlon is typically a warm-weather endeavour. During race season we find ourselves trying to figure out how to endure blistering heat and hot sun. Then, in the off season, we get used to setting our bikes up in the basement, realizing that we’re in for lots of cold treks to and from the swimming pool and doing our best to run outside as much as possible.
Some multisport athletes don’t have to endure all that indoor training, though. Those lucky enough to live in places with “real winter” with lots of snow who can enjoy activities like cross country skiing and snowshoeing get to enjoy the outdoors all year long. If you’re one of those people and are looking for a destination race to take in this winter, you should get to Quebec City for the Pentathlon des Neiges or the S3 Winter World Cup.

This nine-day festival, set in the heart of Quebec City on the Plains of Abraham, is the largest winter multisport event in the world – the 2016 event had just under 6,000 participants. Included in the Pentathlon are cycling, running, cross country skiing, skating and snowshoeing.

Athletes can participate as part of a two- to five-person relay team, or individually. There are both sprint and long distance competitions, ensuring the event caters to all ages and levels, including races for kids. Last year race organizers added a day of activities for seniors 50 and older, too, including events where athletes could ski, skate or snowshoe in individual events at their own pace, along with a triathlon sprint. They also added a Skiathlon race which included classic and skate skiing.

The basic idea is to celebrate winter.

“We want to enable athletes of all levels to enjoy the winter season and take up a challenge, whatever it may be,”
said François Calletta, general manager of the Pentathlon des neiges. “In addition to promoting health through physical activity, our goal is to also contribute to collective health by helping young people from underprivileged areas access extra-curricular sports via the À l’école moi j’bouge project of the Réseau du Sport Étudiant du Québec, in the Quebec City and Chaudière-Appalaches regions. Since 2010, over $90,000 was donated to the program, helping more than 3,000 elementary school children.” 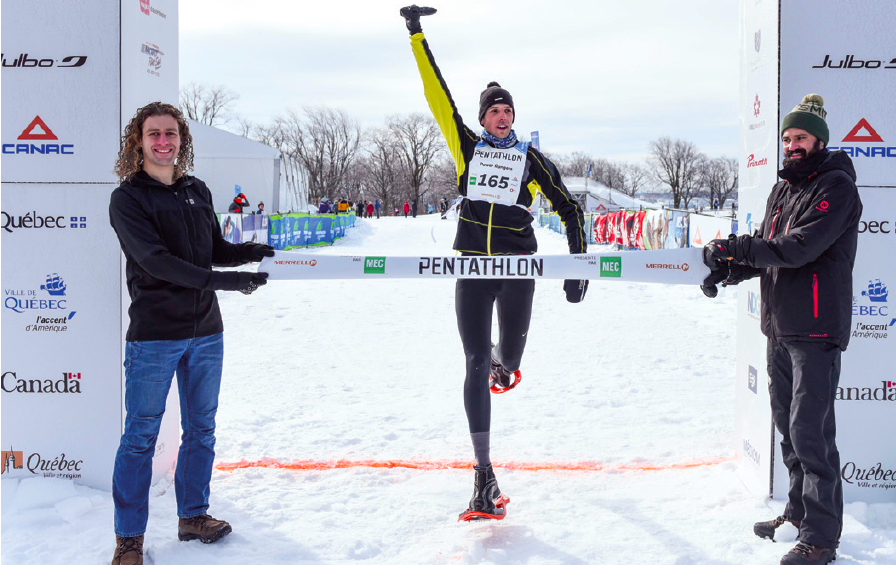 For those looking for a more competitive opportunity, a few years ago the Pentathlon des Neiges kicked off a new format of winter triathlon racing called the S3 winter triathlon. This new format is different to the ITU’s typical winter format (mountain biking, skiing and running) and includes snowshoeing, skating and cross country skiing. Last year’s race was deemed an official ITU world cup event, which returns in 2017.

“The S3 format: snowshoe, skate and ski is very exciting,” continues Calletta. “The ITU wants to develop something in winter. They’ve been trying with the ski, run and bike format. This is the new format that they’re behind.”
The week-long festival showcases some of the most spectacular parts of Quebec City, adding to the unique nature of the event, according to Calletta.
“The Plains of Abraham is one of the most beautiful, if not the most beautiful, parks in the world,” he says. “We have the privilege to play in this park. To be able to skate, to snowshoe, to ski, to bike, to run in downtown Quebec City on natural snow, it’s absolutely unique.”

In addition to taking in the park and the spectacular views of the St. Lawrence River you will enjoy during the race, there’s lots more to see and do in beautiful Quebec City. One of North America’s oldest cities, the picturesque Old Town is designated as a UNESCO World Heritage site. The cobblestone streets are lined with picturesque shops, boutiques, coffee cafés and restaurants. Even in the winter walking through the Old Town is a treat and offers some spectacular views of the historic city walls and the impressive Chateau Frontenac.
For those looking for a culture hit during the trip there are numerous museums (including the Musée National des Beaux-Arts, which is right next to the race site, and the renowned Musée de la Civilisation) or a trip to La Citadelle. Even if you do nothing other than train, race and enjoy some great meals, you’re sure to have one of the most memorable race-cations you’ve ever enjoyed.