Tony O’Keeffe started out fast on Day 3, the run leg of the 2016 Ultraman World Championship in Kona, covering the first 10 kilometres of the double-marathon in 39 minutes.

“Yes, this can be suicide,” O’Keeffe concurs. “My idea was to put pressure on the leaders and force the pace. It’s a long way and my hope was to crack the field, to make up time.”

At 55, O’Keeffe was the oldest in the invitation-only field of 40 and one of the most experienced – in seven previous Ultraman races he had never placed further back than fourth. The 10-km swim and 421-km bike ride behind him, he was in third place, 45 minutes behind Mexico’s Inaki de la Parra, 33, who had a five-minute lead over 40-year-old American, Rob Gray.

O’Keeffe pegged Gray as the one he had to crack by setting such a blistering pace, leaving him in the dust and clocking in the first 42.2 km in 3:22, a couple of minutes slower than planned, but still running strong.

“With eight miles to go, I was ready to push for the win,” O’Keeffe recalls. “Then Juanma Gutiérrez Muñoz came steamrolling through like a man on a mission, Inaki hot on his heels…. I didn’t expect to see Inaki on the run, and it struck me then that the race was over. I got a little down on myself, where I should have kept my foot on the gas. My mindset was: First, or nothing.”

The retired Canadian Forces lieutenant-colonel had to settle for third place, breaking the all-time record for men over the age of 50, but “the Ultraman bridesmaid, yet again,” he says, laughing ruefully.

The irony is, were he a mere mortal, he shouldn’t have been there at all. It seems trite to talk about determination in the rarefied world of ultra-distance sport, but O’Keeffe might top all contenders when it comes to sheer grit. A three-time finisher in the 3,000-mile Race Across America solo cycling event (he placed fourth in 2010) and a veteran of 29 Ironman races, including four trips to the world championship in Kona, O’Keeffe was hit head-on by a pickup truck in September, 2011 while cycling near Colorado Springs.

“It was just one of those freak accidents,” O’Keeffe said.

He had returned three weeks before from a one-year stint in Afghanistan, and he and his wife Jackie Cowley, an RCAF major, had been posted to NORAD headquarters at the Peterson Air Force base.

“I was just so delighted to be out on my bike again,” O’Keeffe said. “I was coming down the hill when I spotted the truck, and then it was as if time slowed down. I could see the driver, a young construction worker. I could see that he wasn’t paying attention.”

O’Keeffe went right through the windshield, waking up in the hospital after emergency surgery to extract shards of carbon fibre – what was left of his brake handle – from the soft tissue around his femur. Luckily, he landed in the hands of Dr. Martin Boublik, the orthopedic surgeon for the Denver Broncos and a consultant to the U.S. national ski team. Over the next several months O’Keeffe went through three operations to repair a torn calf muscle and essentially rebuild both knees.

“Everything in these knees belongs to some dead guy,” O’Keeffe quips.

A physiotherapist’s admonition that he’d never run again was the impetus he needed to sign up for Ultraman 2012, even though he was still on crutches eight months before the race.

He knew he’d made a mistake as soon as he arrived in Kona. 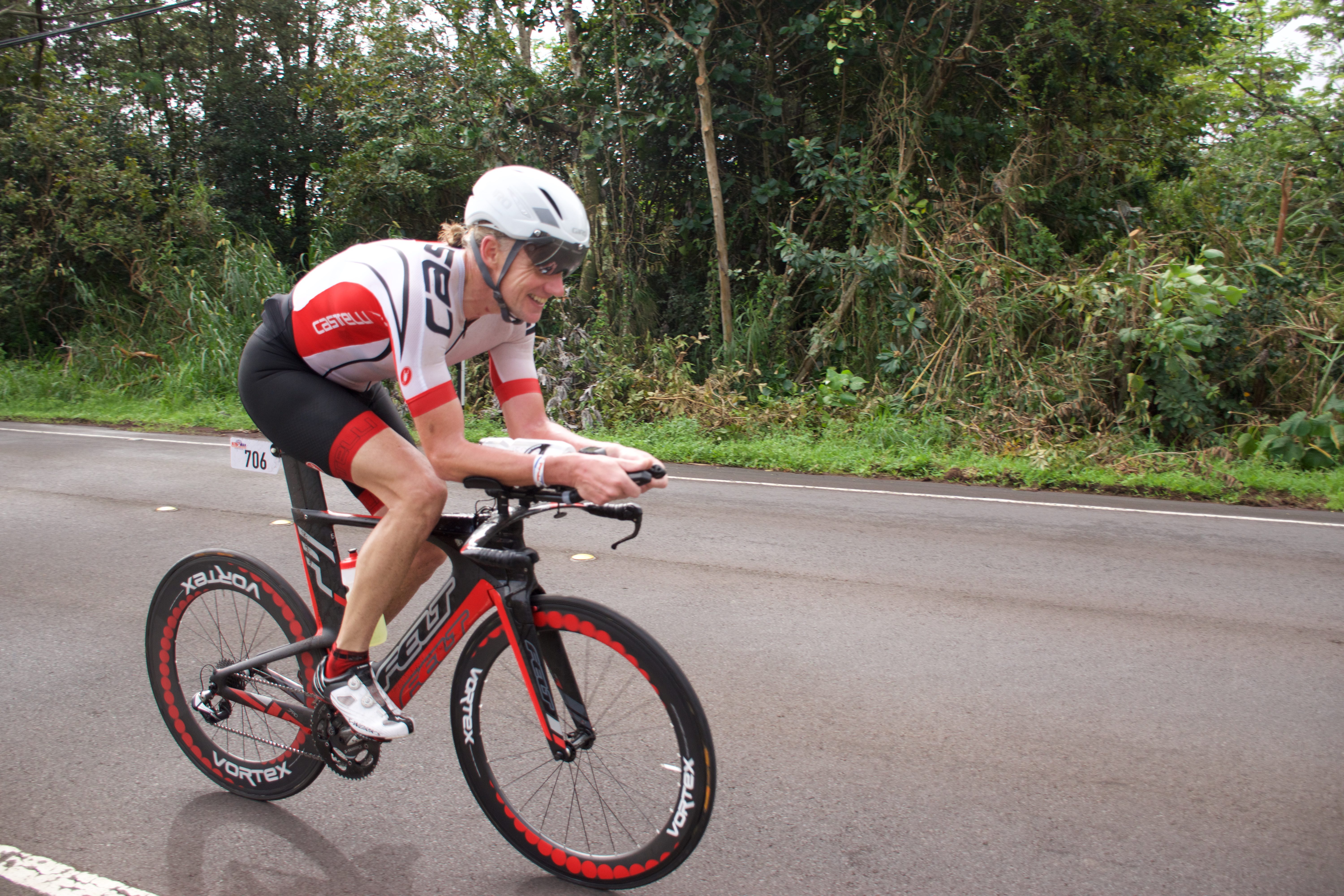 “It was awful,” O’Keefe said. “The only thing that saved me was my training as a soldier. It’s something I drew on in Ride Across America: There is this little dark closet I go into just to get through it.”

Despite a lot of walking in the double-marathon, O’Keeffe managed a fourth place overall finish. Still, he debated whether he’d ever do another long-distance event.

Something pressed him on.

During his rehab after the accident, O’Keeffe had undergone physio next to men and women who had suffered real trauma, soldiers who’d come back from Afghanistan physically broken and mentally dispirited. so getting involved in Soldier On, a Canadian Armed Forces project to help injured members through sport, seemed a natural next step.

He decided to prepare a team of injured veterans to take on Ironman Mont-Tremblant in 2013.

It doesn’t escape him – what bullets he’s dodged, what great opportunities he’s had and how far he’s come. Growing up the only boy with four sisters in an Irish Catholic family in Chateauguay, Que., O’Keeffe says he “got into a lot of clever mischief,” dropping out of school after ninth grade and joining the Canadian Forces at 19 because he had no idea what else to do. O’Keeffe finished high school by correspondence while doing his air crew training, intent on getting into Royal Military College in Kingston, Ont. so that he could become a commissioned officer and fly. He spent the last of the Cold War years tracking Soviet submarine movements in the North Atlantic, eventually becoming a CF18 fighter pilot weapons instructor.

Along the way he had two children, Cale, 29, now a doctor in Buffalo, N.Y. and Keiran, 26, an interior design student. Jackie, a Newfoundlander whose bubbly personality belies the nerves of steel she needs to be an aerospace control officer – and to be Tony’s wife – is the captain of his support crew in every Ultraman race, a low-budget affair that relies on family and friends to supply food, drink and encouragement.

The couple was still stationed in Colorado with NORAD when O’Keeffe came home to Quebec in 2013 to race Ironman Mont-Tremblant. What was supposed to be a friendly homecoming race, competing with his sister Trish – herself a top age-grouper – and his fellow soldiers, turned into a life-altering event. He felt anxious and terrible. He came out of the water in good time, but he had nothing in him for the challenging bike course.

“I remember passing Tony easily on the bike, and I said, ‘What’s going on with my buddy?’” recalls Michel Pellerin, a cardiac surgeon competing in the same 50 to 54 age group.

On the run, O’Keeffe looked pasty and ill, and his heart raced madly as he struggled to keep a 5:30/km pace. Somehow he finished, his mind on the Soldier On competitors who were counting on him to show them how it’s done. Then came the diagnosis of what had happened: supraventricular tachycardia, the same cardiac condition that forced the great Australian triathlete, Greg Welch, to retire in 1999. 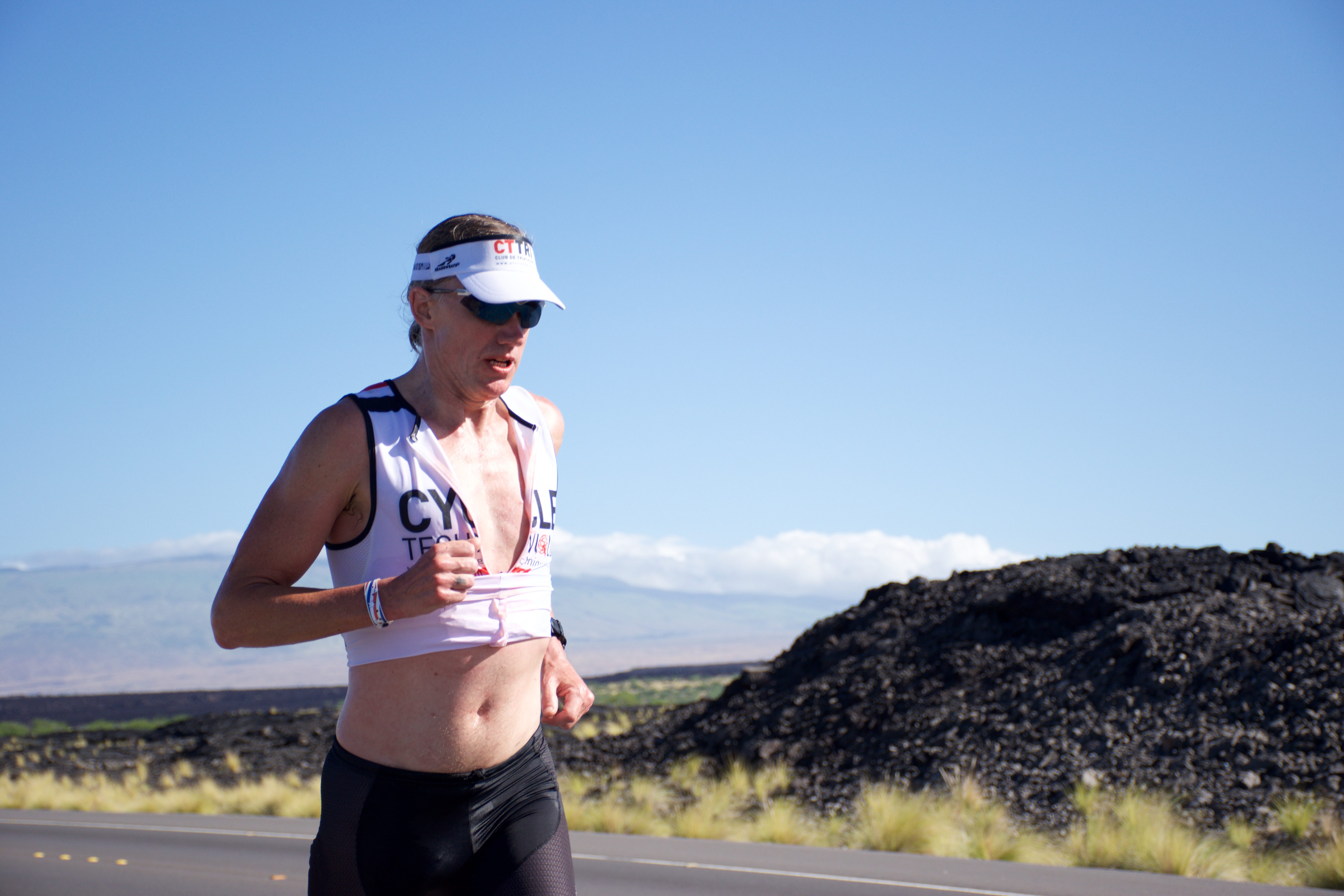 O’Keeffe doesn’t advertise the treatments and procedures he’s had since then to stabilize and monitor his heart. He’s well aware people might find it absurd that he’s still training and well aware of the growing body of scientific evidence that chronic aerobic exercise and competing in ultra-endurance events can be risk factors for permanent cardiac damage. In 2014, months after undergoing an ablation to correct the tachycardia and another procedure to implant a Reveal monitor – a tiny device to record adverse heart events – the monitor picked up atrial fibrillation, a condition he shares with a non-athletic sister. He’s now on sodium channel blockers, which he hastens to add are the opposite of a performance-enhancing drug. So far, they’re working.

O’Keeffe believes he’s training intelligently and learning to listen to his body. His heart events seem linked to anxiety, so he’s eliminated coffee and sugar and taken other steps to de-stress. In 2014, he retired from the Canadian Forces after 33 years of service.

“I won’t register for Ultraman unless I think I can win,” says O’Keeffe. He’s already planning his 2017 season with that race in mind, knowing that there could be setbacks.

“Every race is a gift,” he offers.

Loreen Pindera is an editor at CBC News.