The greatest triathletes in the world that come to Kona with visions of victory have dedicated unprecedented hours to training, intense guidance of top coaches, bring with them the highest tech swim, bike and run racing gear, a drilled-down nutrition plan, have spent time training at altitude, racing their peers, analyzing competitors’ performances at other races, and done everything they can to find an edge to execute at just the right time. They are laser focused on numbers, numbers, numbers. Distance, sets, repeats, bricks, session length, timing. And, finally, they are in supremely outstanding shape. I’d say that at least five male and five female athletes arrive in Kona with a strong chance to win. So what new strategy can make the difference on race day? That’s where the Triathlon Optimum Performance Strategy (TOPS) comes in. 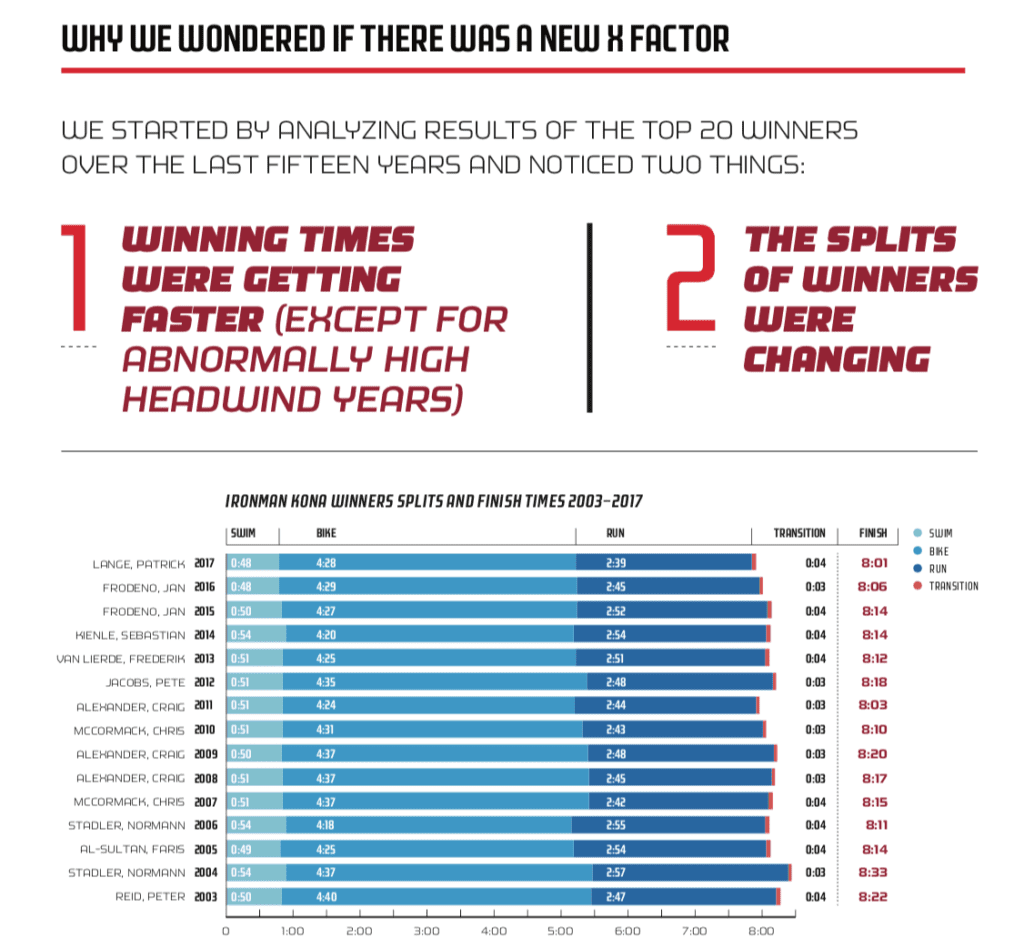 When I began following triathlon, and Kona in particular, 20 years ago, it seemed that winning the bike leg – crushing it, actually – was a strategy pursued by many of the first athletes out of the water. Thomas Hellriegel and Jurgen Zack were examples of triathletes renowned for their prowess on the bike. They sure made an impression on TV audiences and cyclists who decided to chase them in hot pursuit was appropriate. It was if there was an award for arriving fastest into T2.

Guess what? Many of the blazingly impressive cyclists got on to the run course with less than stellar form. Sure they would be in the lead, but the strategy for them at that time was: hold off the other guys as long as possible. 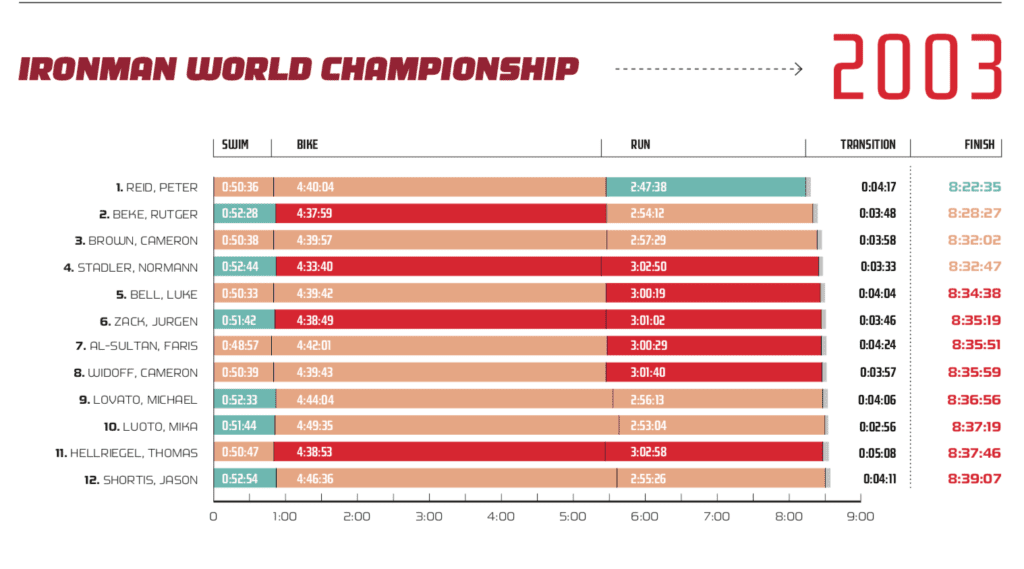 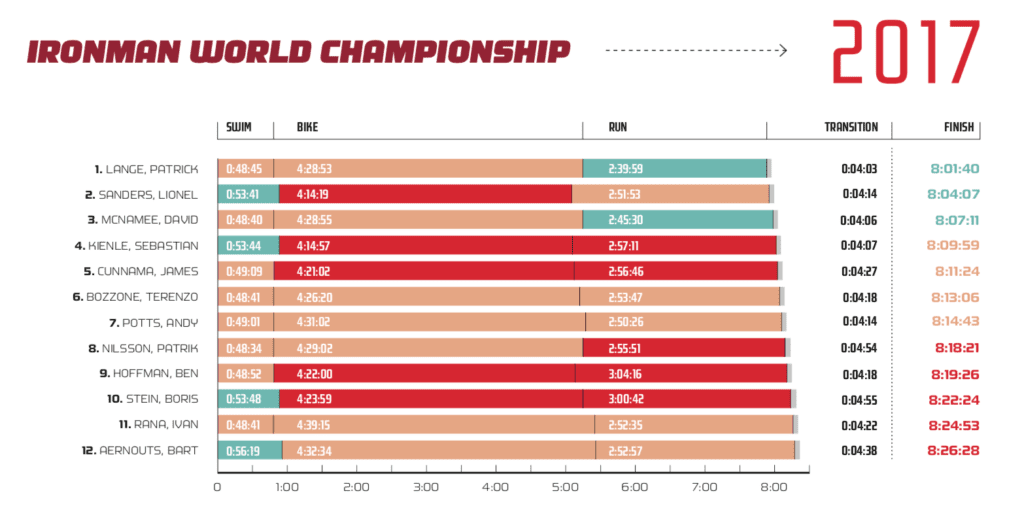 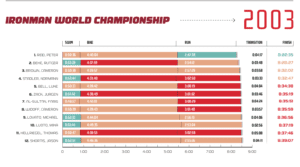 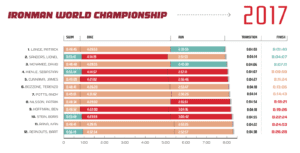 Let’s look at Patrick Lange, 2017’s winner. Ten per cent of his race time was spent in the water, like many pros. Then, notably, he spent almost 56 per cent of his racing time on the bike. What does that mean? His TOPS on the bike was not to be the fastest rider of the day. He stuck to a strategy that would not be influenced by other competitors near him. He knew he’d catch them on the run.

In contrast look at TOPS for Lionel Sanders, the second place finisher, particularly, his bike TOPS. This guy raced up Palani Drive in overdrive and rode the course like a rocket, finishing with a 4:14 bike split. Unfortunately, that represented only 52.5 per cent of his racing time. Unfortunately, because that meant he was worn down enough to spend 35 per cent of his racing time on the marathon.

Sanders’s bike split TOPS was 3.3 per cent less than Lange’s. Sanders got on the run course about 10 minutes faster than Lange. But, his race was practically lost from the start. Lange continues to calmly execute a TOPS game plan on his terms. Lange ran his marathon 12 minutes faster than Sanders, who lost by two minutes and 27 seconds. In retrospect, looking at the data, Lange executed what we’re beginning to consider an excellent TOPS triathlon.

We took an in-depth look for various patterns that resulted in greatest success. The first had seemed obvious: NBC announcer Al Trautwig would annually repeat some form of the following:

One thing Trautwig, and many coaches and experts I’ve spoken with about winning Kona appear to have missed in embracing thinking like Trautwig’s: the statements were, for the most part, anecdotal. Yes, true to a degree, but what I hadn’t heard was an analytical explanation about the best way to approach swim, bike and run to win.

Our analysis of the top 20 male and top 20 female finishers and their time splits don’t tell the whole story, they lead to a different interpretation: that balancing your race performance by the TOPS guidelines, according to your skill level, will result in a better finish.

More specifically, the closer we looked, the clearer it became. 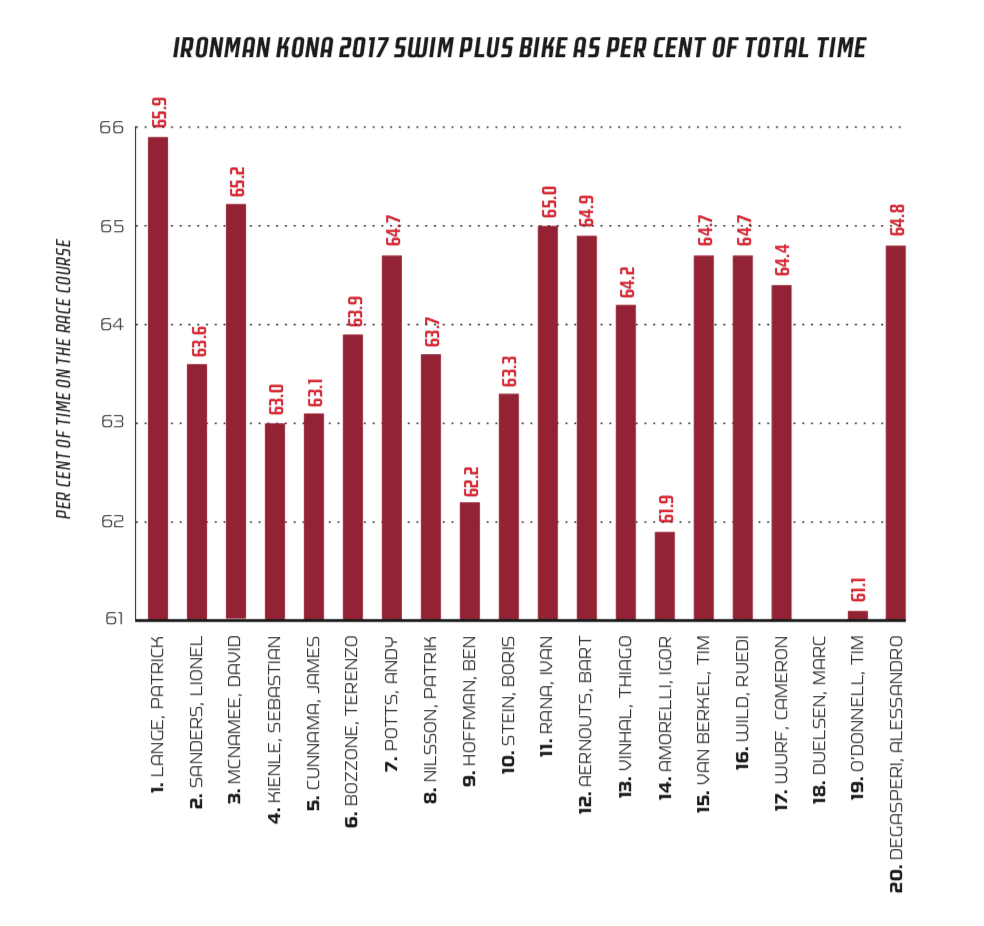 What jumps out? First, the winner of the Ironman World Championship last year was, in fact, the slow- est of the top 20 male finishers into T2. At nearly 66 per cent, his race strategy seems to indicate he raced his own race, not other athletes. Let ’em pass, he might have been thinking. Because his balanced approach up to the run was on track. More than on track. He charged on the run course with a plan, a good idea that he could execute, and finished with a 2:39 marathon and a two-minute victory.

Remember above when we looked at second-place finisher Lionel Sanders’s race in terms of time? Well, translate that to TOPS and you can see in this chart, with nearly a 64 per cent swim/bike per cent of finish time, he was doomed to spend the next 36 per cent running. A two per cent gap to Lange.

Remember when we emphasized the importance of a one per cent difference in TOPS finish per cent equals five minutes on the course? Sanders entered T2 10 minutes ahead of Lange, or two per cent TOPS. Lange steadily made up that two per cent and passed Sanders to win by two minutes.

You couldn’t have a better illustration of the success or disappointment of applying TOPS. Balance your race. Don’t be afraid to take the swim and bike slower, to emerge with a higher TOPS percentage entering the run. If you’ve executed the plan, you’ll have a faster run and a better chance to win. That’s the kind of new edge pros are looking for. 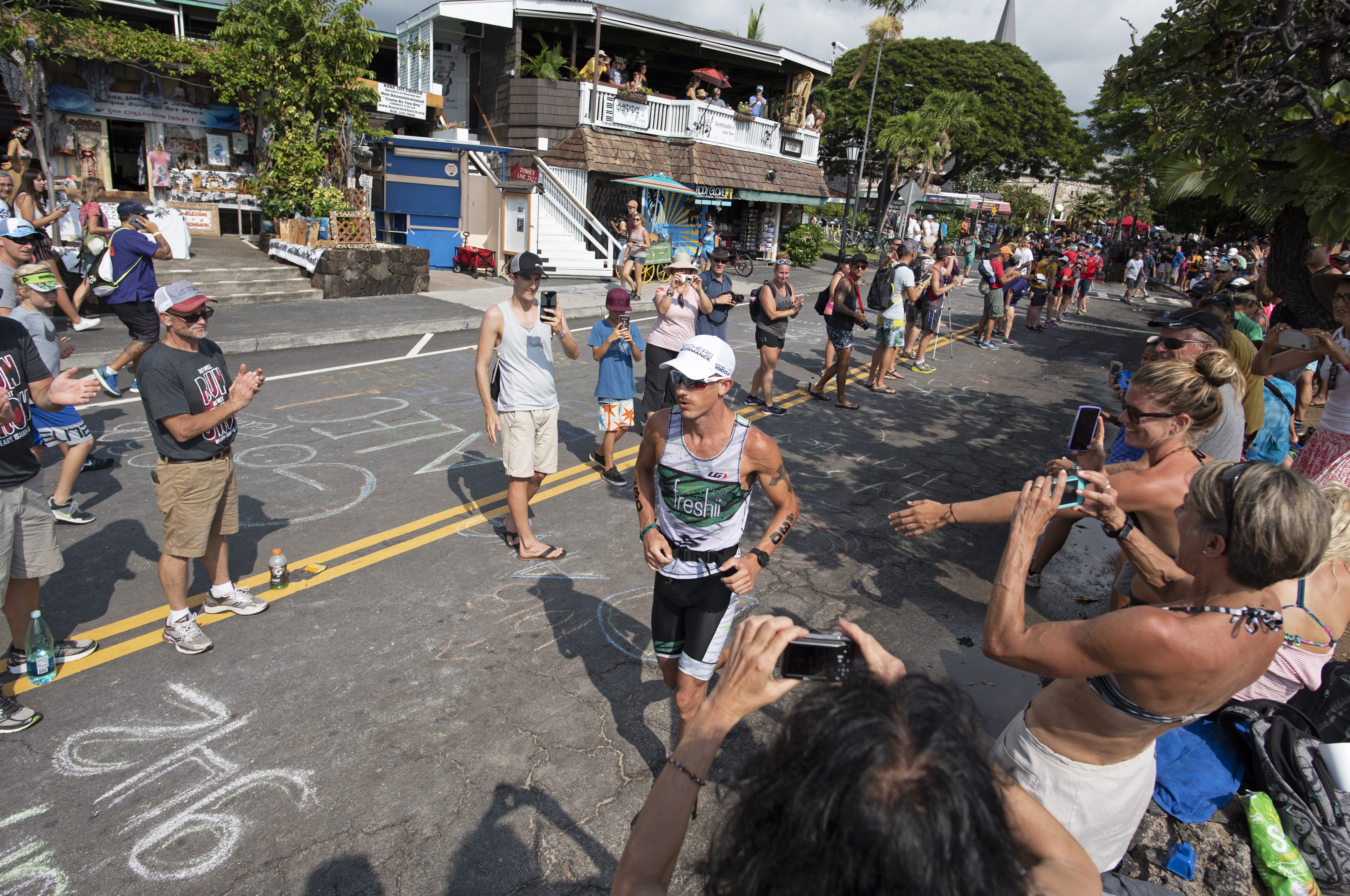 Raymond Britt is CEO of WinSight.net E-commerce Consulting, Publisher of RunTri.com, a 29-time Ironman and three-time Kona finisher. His email is RaymondBritt@WinSight.net.