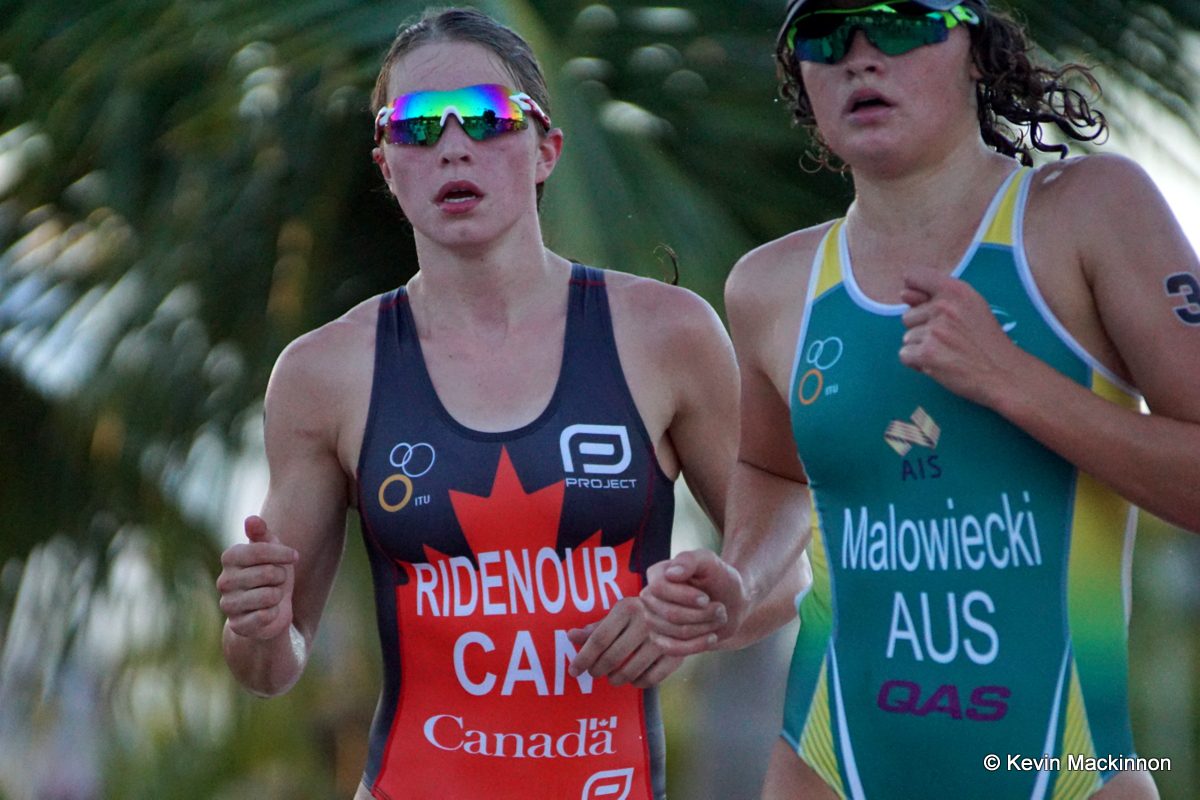 Desirae Ridenour is the leading light in a group of talented Canadian juniors taking on the best young triathletes in the world.

Ridenour, 17, from Cowichan Bay, B.C., is on a remarkable run of form that has seen her win a host of gold medals over the last two seasons, including the Junior American Championship in July this year and the Junior National title in 2016.

Ridenour was inspired to take up triathlon by her older sister Christine, who has also competed for Canada in the sport. She joined coach Kelly Guest and his team, Kelly’s Kids Triathlon while still in elementary school. Ridenour continued training and racing with Guest into high school, also winning a number of running events across Vancouver Island and British Columbia. In late 2015 she decided to focus solely on becoming an elite triathlete.

“You have a huge variety and your training is always going to be different. It builds you as a person and you know other people from swimming, biking, and running.” says Ridenour, of her decision.

She joined the National Performance Centre and began working with Triathlon Canada head coach Jono Hall. Throughout 2016, the emphasis was on adapting to her new training plan. Hall says that races were a chance for her to demonstrate any improvements, which she did in some style.

Early this year, triathlon had to take a back seat, as Ridenour made graduating from high school her priority. Despite this, 2017 has again been incredibly successful and Hall is delighted with her progress given the relative lack of training.

“She’s a real competitor. But the thing I like about Des is that she’s raced well, but we haven’t done a lot of work. There’s a lot more to come. I’m excited by what she’s yet to do.” says Hall.

Highlights this year include moving up from sixth to first at the Junior American Championships, winning a Junior European Cup event, and three gold medals at the Canada Summer Games.

The focus is now firmly on the Junior World Championships in Rotterdam in September, before Ridenour gets the chance to test herself at the inaugural Women’s Super League Triathlon at the end of that month. The event, on the island of Jersey, U.K., will pit the top short and long-course triathletes against each other in a series of fast and technical races. With another year of eligibility as a junior in 2018, this showcase will provide an amazing opportunity to see how she stacks up against the elite of the sport.

“I’m a little nervous. I’ll be racing the best triathletes in the world so it’s a little intimidating. But I hope I put in my best effort and do well.” says Ridenour. 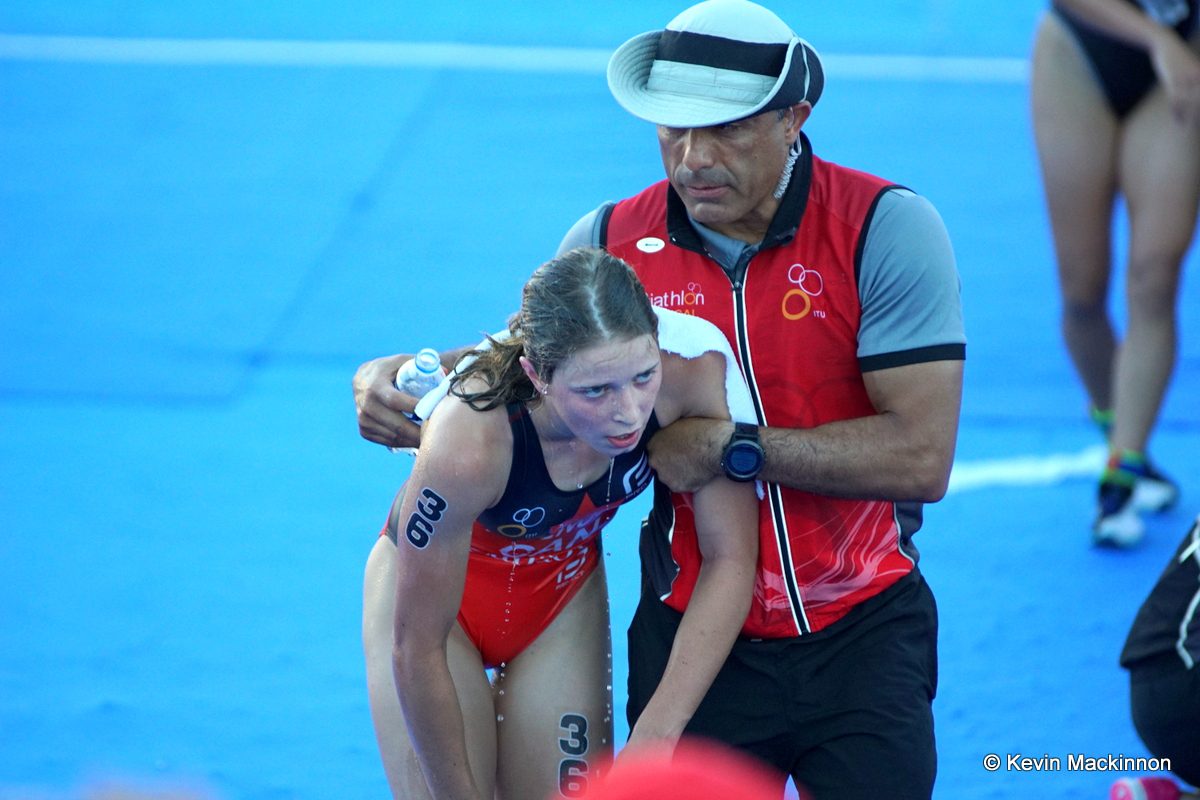 The real challenges in Ridenour’s triathlon career are still to come though. Eugene Liang, High Performance Director for Triathlon Canada, admits that mistakes have been made in the past.

“Triathlon Canada needs change. We’ve had a lot of hotshot junior kids that for want of a better word have fizzled and burned out. That strategy that was employed didn’t succeed.” says Liang.

Hall echoes these thoughts, saying, “In Canada, we don’t have a stellar record with some of the juniors. It’s about finding the right balance so when we’re talking about Des [in the future], we’re not talking about a junior that showed promise in 2017, we’re talking about an elite athlete who’s racing well. She’s got all the raw ingredients and she’s a very smart young woman.”

Liang will have a crucial role to play in supporting Ridenour and creating the framework for her development. An example he gives, is that she was selected to compete at the World Mixed Relay Championship this year at the elite level. Both Ridenour and Hall felt this wasn’t in her best interests, so he was happy to create a race plan that didn’t involve this event.

“We’re trying to drive our athletes to the appropriate level of racing so they have a more sustainable career.” says Liang.

Ridenour’s next test will be starting at the University of Victoria this fall. She will have to balance academics with a gradual increase in her training volume as Hall looks to help convert her raw speed into Olympic distance endurance. But he also feels like her ambition to study is a good thing to help avoid burnout.

“I think [studying] will help guarantee that she does get through the next three years, because these are the years that prodigious junior women talents either make it or they disappear. We’re about to get into the hard yards.” says Hall.

For now though, Ridenour is loving the triathlon lifestyle.

“I really like travelling. You feel free and do whatever you want, and get to learn for yourself. You make a lot of mistakes but you learn from them.” says Ridenour.

Both Hall and Liang acknowledge the huge potential that she has as a triathlete and are determined to support her in fulfilling that. With a large group of exciting junior athletes coming through, Liang feels Ridenour is one key piece of a puzzle that could see Canadian triathletes winning many races in the coming years.