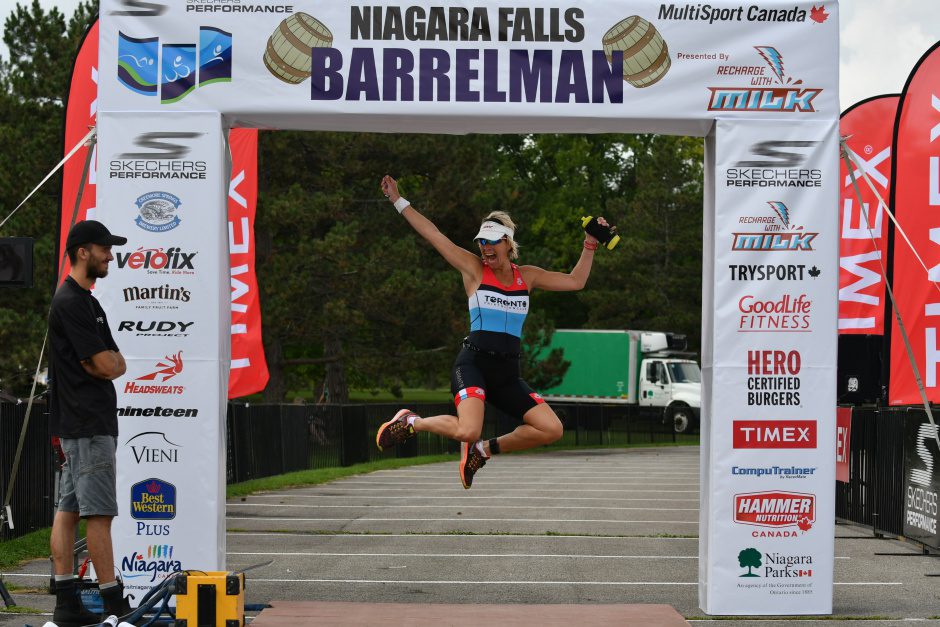 In a sport that has been seeing declining participation numbers in North America, Ontario’s John Salt has seen registration numbers increasing each year for his Niagara Falls race, Barrelman. The Multisport Canada series president started the Barrelman half distance race four years ago — it soon became one of the largest non-Ironman half on the continent, and now, in part thanks to its recent partnership with American brand Rev3, has just a few slots remaining before selling out its September 17 race, with 1,000 participants.

TMC spoke to Salt about what he’s doing differently to engage the North American triathlon market with his boutique event. He says that working with Rev3 to produce the event has been the biggest reason for growing numbers this year. For a race that sits on the border of the two countries, it makes sense that close to equal numbers of athletes from each country would register for the event.

“The partnership has played out exactly as we hoped it would,” he explains. “Historically we had around 70 American athletes come to the race. As of today, we have 305. Looking at the data, 290 of those are new athletes.” He adds, “Rev3 has done a great job with their brand in certain markets.”

Part of Rev3’s success comes from their highly engaged race ambassador program and social media presence, which helps them draw numbers from triathlon clubs and gets people excited about their races months in advance. While Rev3 has been promoting Barrelman through their social media channels with great engagement, Salt has taken note of this tactic and created an interactive Facebook group for Barrelman participants. The group currently has over 600 members, and athletes post regularly with questions and comments about the event. Salt himself takes the time to answer athletes’ individual questions and post “teasers” about the race such as glimpses of race medals and shirts. He hosted a Facebook Live session to answer athletes’ additional questions. It’s clear from the engagement this draws, that it’s helping raise the hype for the race.

Athletes are drawn to Barrelman for a variety of reasons. Many have come to love and be loyal to the Multisport Canada series, with its community feel. It’s the perfect race for first-timers taking a crack at the half distance, with its calm water swim in the Welland Canal and near-flat bike course. For that same reason, more seasoned athletes choose it to take a crack at a half distance PB. The run course keeps athletes engaged for the whole race with it’s stunning views and spectator-friendly route. Additionally, the race is more affordable than Ironman 70.3 races.

“I think that if we made this race an Ironman event, we would be up to 2,500 entires,” Salt explains. “But I want Barrelman to be unique. Yes, those numbers would be an indication of success from a financial perspective, but how would it change the event?”

Above all, Salt values the safety of his athletes on race day, and after years spent at the venue and course he knows what it can and cannot accommodate. Capping this year’s event at 1,000 athletes, which it is now very close to, means the bike course stays safe for everyone. There’s definitely room for growth in the future, though, and Salt is optimistic the race will safely host 1,500 athletes in the future without compromising the overall athlete experience.

While seeing such great success with the Rev3 partnership so far, Salt says he and his Multisport Canada team are exploring every opportunity to expand and partner with the brand for other events down the road. They’ll sit down after Barrelman to discuss what’s next, but Salt thinks that bringing them in for one of the shorter events such as Welland (a perfect tune up race with Barrelman) could be a great play.

While other triathlon series and individual races across North America are suffering right now, Salt acknowledges the challenges that race directors, including himself, face.

“The sport isn’t resonating with people in general right now,” he says. “The race scene has totally changed. It used to be about series racing, now it’s about athletes picking one event that they’ll do. Athletes look for the pizzazz and the fun factor of an event. They’re looking for an experiential event.”

Salt has worked hard to create that exciting race experience at Barrelman, welcoming a strong club presence and employing entertainment at aid stations along the picturesque run course.

“I want to make this event feel like something special,” Salt says. If the pre-race excitement surrounding the event so far is any indication, it’s certainly going to be.