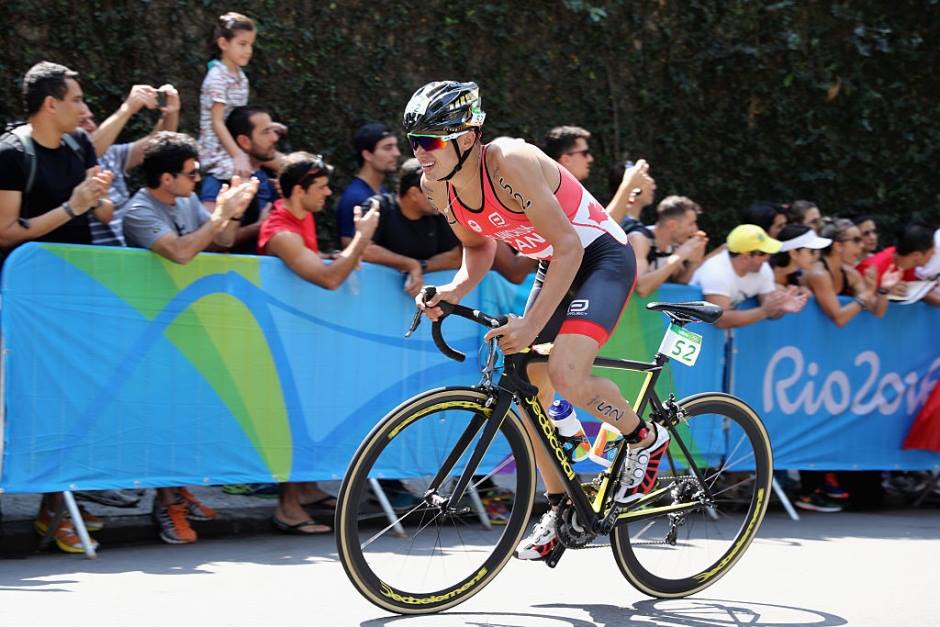 Canada’s Tyler Mislawchuk and Andrew Yorke both impressed their Canadian supporters with their drive and determination during this morning’s men’s triathlon at the Rio Olympic Games. For Mislawchuk, a top 15 finish proved he’s one of the sport’s rising talents and holds a bright future for Canadian short course triathlon as the youngest man to compete at just 21 years old. For Yorke, it wasn’t the day he was hoping for — he was involved in a crash during the bike leg — but his determination to finish the race evoked support from Canadians all over social media.

I have the best family and friends anyone could ask for. 15th for me today in my first Olympics.

Tough day at the #Olympics Was so proud to wear the #mapleleaf🍁 No way in hell I would quit. Love to my family and friends #trialsofmiles

Tyler Mislawchuk came out of the water in 19th and only improved upon his positioning during this morning’s race. The 21-year-old Manitoban rode with the chase pack behind the lead group of 10 for the entire bike leg and worked consistently to overtake his competitors for an eventual 15th place overall.

“Everyone knew it was going to be hard. An ocean swim, it was so hot, but the heat didn’t bother me too much today,” said Mislawchuk. “I am happy with the effort but unfortunately I know what could have been. I was just two or three seconds away from missing that lead pack onto the bike. Getting into that group would have been the difference from racing for top-5 or top-15, but that is racing.”

A model of progression over the last two years, Mislawchuk’s performance in Rio is validation he is ready to carry the torch for Canadian triathlon towards 2020 and beyond. Heading into his first Olympic start Mislawchuk posted a career-best seventh-place finish in his final World Triathlon Series and also has two 10ths, an 11th and 14th-place finish in his six starts on top triathlon series in the world.

“There were three or four guys between me and the lead group that dropped off the wheel of the front group on the first hill, and unfortunately we missed it. This is the Olympics though. You can’t miss by one per cent,” said Mislawchuk.

The young Canuck worked in the first chase pack for the opening three laps of the bike before forming into a large group of 40 riders that raced just over one minute behind the leaders for the back half of the eight-lap course.

“I was working pretty hard the whole ride. There were only five or six of us working out of that big group which was a bit frustrating because who knows what we could have done if we were better organized,” added Mislawchuk. “But this is the Olympic race. I didn’t want to sit in for 20th spot. I wanted to put it all out there and that’s what I did today.”

Yorke refuses to give up despite crash

Andrew Yorke went into this morning’s race hoping for a much better overall placing than 42nd, but what the 27-year-old has yet to realize is that his performance has been inspirational for triathletes all over the country. Canada’s Barrie Shepley, who was commentating at the Games for CBC this morning, says Yorke deserves a “badge of courage” for getting back on his bike and finishing strong.

Proud of @c3trainingclub Andrew Yorke for his gutsy finish after his bike crash today. The man has no quit in him. He made Canada proud.

We love you Andrew…you inspire!

Kudos to @Mislawchuk and @trialsyorke for such tough, inspiring racing!! Thinking of @JJdub_Wilson and crossing fingers all is ok

“I was on a downhill and was just trying to conserve energy,” Yorke said. “I heard a crash ahead of me, and that point you are just guessing. I couldn’t see anything. The guys in front of me parted and I hit back edge of the tire ahead of me. My front wheel punctured and I went down, said an emotional Yorke at the finish line. “I just ran to the next wheel stop. I didn’t know if I could finish the bike.”

Determined to finish his first Olympic race, Yorke dug deep to get back on his feet, run to a wheel stop, and get back on the bike to finish the race and post a time of 1:52:46.

“I worked a long time to get here. I just wanted to put my head down and finish. I have only crashed twice in my professional career. It’s a gamble you take every time you start a race. It sucks that it happened here but there is no way I was going to quit. I just never quit and that’s why I’m here.

“I hope everyone is okay. I am very happy for Tyler (Mislawchuk). He is an amazing athlete and person, and been awesome teammate here for me.”