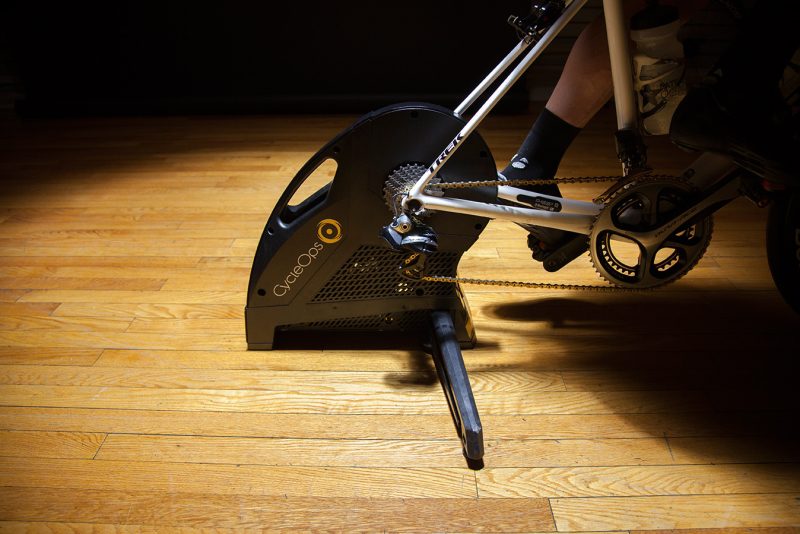 For triathletes, it’s hard to escape the trainer when you’re looking to log quality miles on the bike year-round, as traffic and weather conditions conspire at times to make outdoor riding less than ideal. With the evolution we’ve seen of smart trainers in the last few years, the trainer no longer needs to be a much-dreaded training tool — besides offering a better-than-ever quality of indoor training, smart trainers are offering improved compatibility with training apps so you can not only make your workouts more fun, but seamlessly upload them onto your preferred training applications. More than ever, having a good trainer is an essential year-round training tool as riding indoors is one of most effective ways to improve on the bike. Cycleops’ direct-drive Hammer stands out for its exceptional technological features and remarkably life-like riding quality. We spent time this winter training on the Hammer — here’s why we rank it as one of our favourite trainers we’ve tested to date.

The Hammer has a fairly easy set-up compared to some smart trainers we’ve tested. You’ll need to separately purchase and set up a cassette for it — with few exceptions (Wahoo kickr), this is standard for direct-drive trainers. Cassettes themselves run for between roughly $40 to $70. We used a Shimano Ultegra one (the trainer works with 8 to 11 speed cassettes) and while it was our first time installing a cassette on a trainer, it took less than 10 minutes. Just make sure you get one that is compatible with your bike.

You’ll also need a quick release skewer, although the one your existing rear wheel can work. The Hammer comes out of the box set up for bikes with quick release drop outs, most likely what you have with your current tri bike, but it also ships with a range of thru-axle adapters to suit any bike. A benefit to the Hammer is it works with virtually every bike out there. That’s a huge draw for triathletes who don’t like to use their carbon framed TT bike on the trainer all winter. The thru-axles also helps ensure the Hammer is future-proof, so no matter what super bike you end up with down the line, you’ll still be able to use your Hammer.

Train with the platform you prefer

The Hammer easily connects to bike computer and regular computer (if you’re using it for entertainment or with a training app) and in our tests, the signal stayed strong for the duration of the ride.

Perhaps the best feature of the Hammer is its compatibility with a wide range of devices and training applications. We tested out CycleOps’ own VirtualTraining app, but also rode with PerfPRO Studio. In addition to the big ones like Zwift and TrainerRoad, you’d be hard pressed to find a training app that this trainer isn’t compatible with.

The trainer uses ANT+ and Bluetooth to connect with these apps and also for resistance control. The resistance control is key as this is how the trainer adjusts your load for the specific workout you’re performing. The Hammer can handle up to 2000 Watts and simulate up to a 20% grade so you can ride as hard as your heart desires.

Calibration is straightforward with the CycleOps VirtualTraining app. This was our first time testing the brand’s own app, and we actually found we liked it a lot  more than some other third party ones. Not only does it work with trainers from other brands (such as Computrainer and Wahoo), it offers the same great range of workouts as the big name apps and includes tons of race courses you can complete in preparation for your next race.

We did find calibration took a really long time with the Hammer. It took about two minutes to spin up to the right speed and then another 90 seconds or so maintaining that speed before coasting. This is significantly longer than other trainers we’ve tested. According to user forums, CycleOps has said they’re working on getting this time cut down, with a firmware update.

A quiet, stowable option for those with limited space

Trainers aren’t always easy to store. For those with limited space (like our tester, who is an apartment dweller), the Hammer proved one of the most easily stowable options we’ve brought home. The built-in top handle is placed to handle the weight in a balance manner, a feature that Cycleops added after hearing feedback from users looking for something more transportable. The stabilizing legs also folded away neatly for stroage. It certainly makes  much easier to move around than other smart trainers, despite it’s weight. Thanks to this weight (20 lbs) and its well-designed structure, the Hammer is incredibly stable while riding.

Another bonus? The Hammer proved to be remarkably quiet, a major plus for those living in apartment buildings but also for anyone wanting to sneak into their pain cave during early hours or late at night for their workout and don’t want to have to worry about waking up the family.

With any power trainer, it’s important to note that it’s not going to track the exact same numbers as your bike’s power meter. With that being said, anything under +/- 5% is good as far as power accuracy goes.

When tested with our Stages power meter, the Hammer tested around +/- 3% on average for all our test rides, which we’ve found to be the same as other similar trainers.

At $1,620 the Hammer is definitely an investment, but if you’ve decided to take the plunge and purchase a smart trainer, this one is a top choice. With its accuracy, wide range of compatible applications, quiet and storage-friendly construction, it’s clear Cycleops has carefully considered  the needs of users and created a smart trainer that has it all.