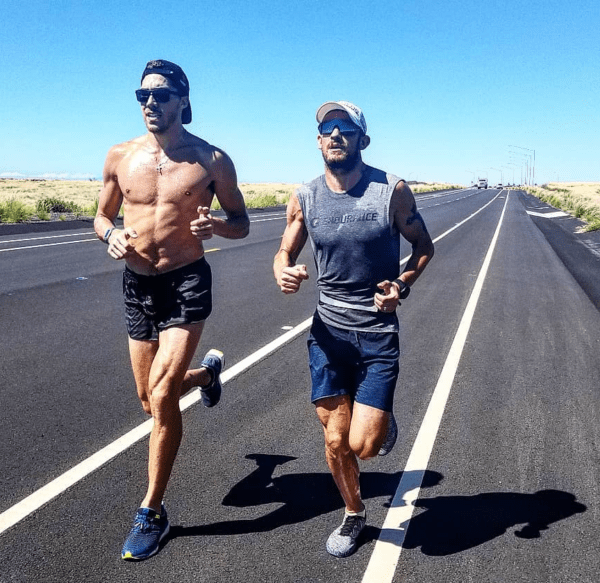 Lionel Sanders has a fast running, beer chugging training partner. It’s Corey Bellmore – the beer mile world record holder. But seriously he’s fast. The Canadian has a 1,500m personal best of 3:40 and is a national bronze medalist in the distance.

Anyone who follows Sanders on social media knows he’s been spending a lot of time with Bellemore, doing his Ironman test session and various long runs with the world record holder. The pair is currently in Hawaii together, Bellemore training for cross-country, and Sanders for the 2018 IRONMAN World Championship. Bellemore and Sanders are both Windsor, Ont. natives, that’s where the pair connected. Bellemore describes Sanders as someone he’s always looked up to.

Bellemore says he’s helping Sanders with the run portion of his event, but he’s also jumping into the bikes and swims. Most people know Bellemore for his track accomplishments or beer mile world record.

But, what many people don’t know about Bellemore is that he was a swimmer in high school, and has used cycling as a cross-training method for years during his running career. Combine those two things with an elite running resume, and you’ve got a talented triathlete.

Bellemore would swim in high school from November through the second week of March. He would train four times in the morning and three to four times at the end of the day. The 1,500m runner says, “I did that from grade nine to grade 12, and didn’t run at all through the winter. I strictly swam. I’ve kept it as a cross-training tool for running. If I can’t run, I can still get quality work done in the pool or on the bike.”

Bellemore is currently living the triathlon lifestyle. “We sleep, eat, and train hard. Today I went out for an hour long bike, then I’ll go and do three to four kilometres in the pool, and follow that up with a 25-30 kilometre run. We’ll do that at about 4:10/km pace.”

Is Bellemore looking to give triathlon a try? Turns out yes – eventually. “This is a good opportunity to have fun and live the triathlon lifestyle because I’ve considered possibly doing this one day. My loose plan is to give triathlon a run two years from now. I want to give the 2020 Olympics a shot on the track and then decide.”

A variation of this story is on runningmagazine.ca.