The inaugural Ironman 70.3 Cartagena took place over the weekend, but the event did not run as smoothly as race directors hoped for. Due to unclear direction on course, the winner, Colombia’s own Carlos Forero Quinchera clocked a 3:23:56 winning time — which if legitimate, would shatter the current half distance world record by more than 15 minutes. The current results also show that the next three pro men also finished below the elusive 3:45 mark. Closer inspection reveals that the first six pro men to cross the finish line all clocked sub-1:04 half marathons for the 21.1 km run leg of the race.

These results indicate some serious confusion on the course. According to American Matt Hanson, who is currently listed as having finished fourth in 3:38:01, race leaders had been poorly directed away from a significant portion of the run course. Due a new WTC rule that now has the leader bikes behind the leaders instead of riding in front of them, athletes were taking directions from volunteers on course and many received conflicting information about routes to follow. Some pro men only completed 11.2 km of running, others 16.2 km. The race director eventually went out on the course during the race to better indicate the course with cones, so some of the top 10 pro men results appear to reflect correct times over the correct distance. 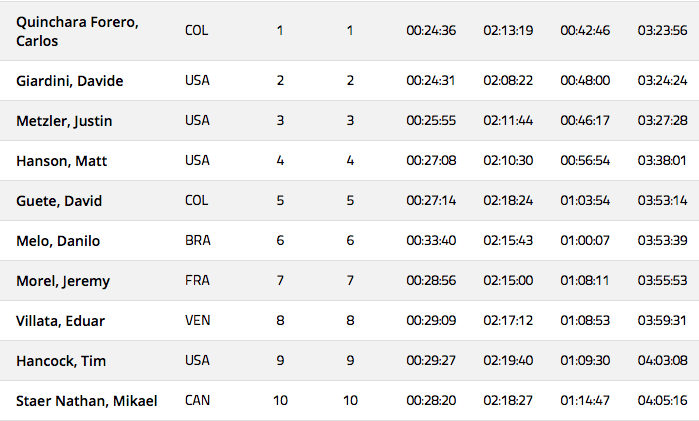 It’s unclear who the official race winners will be, now that Ironman recognized the errors. As of 8:45 EST this morning, they had announced on their website that the results as stated above are not official. Earlier this morning, Hanson posted an Instagram picture that suggests he was told he was indeed the race winner. The pro women’s results do not suggest similar confusion. Full current results available here.