Starting Feb. 3 Zwift’s Z Pro Tri Series returns for a four-week run, this time as duathlon races – bike/ run/ bike. The races will start as an individual time trial, then transition to a run race followed by a points race on the bike.

“I’m excited to see how the run shakes up the competition,” says Zwift ambassador Tim Don. “The final leg of the race will be brutal with a hard run in the legs as well as an explosive start on the bike, bring it on!” 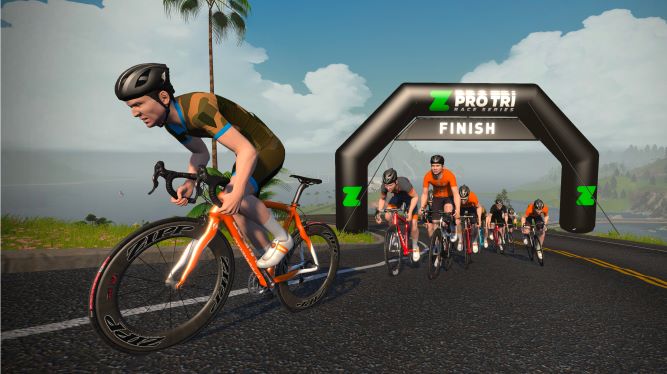 The races will be broadcast with commentary by Matt Lieto and Sarah True. You can find out more information about the series here.

Zwift will also be starting up a duathlon league for age group competitors starting on Feb. 17 which will run for six weeks. Those events will include a 35-minute bike followed by a 15 min run, with a 10-minute transition break in between. Scoring will be based on the total number of metres covered in each sport. Athletes can register and get more information on the new duathlon series here.

Related: The best Zwift rides for your group meetup

Zwift has also partnered with Ryzon for a “Days of Dedication Series” – a four-week series of time trial races with social warm-up rides starting on Feb. 4. The warm-up rides will be hosted by Ryzon ambassadors Jan Frodeno, Imogen Simmonds and Nick Kastelein.

“Once warmed up, Zwifters can test time trial skills through the increasingly difficult non-drafting stage races,” according to this morning’s announcement. “Stage 1 begins with a 20km flat time trial held on the Sand Sequoias route. Stage 2 is also 20km but will require a different pacing technique, taking in 1181m of elevation gain on the La Reine in France. Stage 3 and 4 will ask competitors to double down starting with a 40km time trial over two laps of Tempus Fugit on Watopia. The final stage will be the toughest of the series, covering 43.3km and 1117m of elevation gain on the WBR Climbing Series Course.”

Athletes can find out more about the series here.