Chess is to checkers what the triathlon swim is to racing in a pool. While they’re both fun, chess requires knowing more game pieces and experimenting with a few more moves.

The variable nature of open water ensures that there is not a silver bullet workout when it comes to developing speed. Athletes who are gifted with fast twitch muscle fibres, or who have done a lot of speed training in their development as swimmers, will need to improve their endurance around race pace. Those who have diesel engines, but who have difficulty swimming in zone four or above, need to train at higher thresholds to improve their speed. We reached out to four Canadian pros and asked them to describe a swim set they think makes them faster.

Angela Neath loves the following set. She says that she uses it to change her speed and to work on the high-end above-race-pace efforts. The high end fast and all-out work described below should be done at zone 4 or zone 5.

To get faster Jeff Symonds uses a strategy that combines Ironman race pace work with zone 4/critical speed work. Follow his workout on the right. Getting faster in open water racing is not simply about holding the fastest pace possible for as long as possible. For Symonds, it’s about being able to react to surges and to take advantage of race conditions and then recover from those hard efforts, much like cyclists are required to do in bike races.

In Symonds’s words: “I use it to prepare for races when I don’t have a good location to open water swim. It simulates the dynamics of open water racing for me. The workout really emulates closing gaps or surging in races and settling back into a rhythm. I find it helps me to build speed, but more so to be able to apply that speed during the key moments in races where speed matters. During the faster parts of the workout I imagine that I am closing a gap or opening up a gap to really rehearse the mindset and feeling I want during the race.”

2010 Triathlon Canada Athlete of the Year, Paula Findlay, uses a tempo paced endurance set to make sure she is ready for the high stakes 1,500 m swim portion of world cup events. Her target pace for this set is a few seconds slower than her race pace. Findlay does her chosen set in a long course pool. It’s harder to maintain a given pace in a long course pool because your arms don’t get to rest as often at the walls. You also don’t get the boost to your pace from pushing off the walls as frequently.

Findlay talks about how this set makes her feel: “It starts out feeling fairly easy, but at the halfway mark the fatigue really starts to set in. If I can finish this set successfully then I know I’m in really good swim shape. I always get nervous for this session and it’s definitely not ‘fun,’ but it’s a good benchmark to test myself and set up a good aerobic base in the pool. It’s coach Siri Lindley’s set. She did it regularly when racing itu.” This set would still be effective for age group athletes if the repeats were brought down to 30, 20 or even 15 for those racing sprints.

Similar to Naeth, Sarah Gross uses short, all-out efforts to boost her speed. She used the following set to increase her arm turnover in preparation for Ironman Mont Tremblant and Ironman Hawaii. 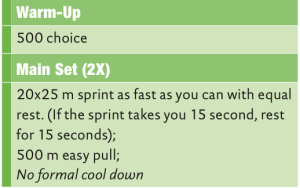