We’d predicted that Super League Malibu would be an incredibly exciting event both because it was final event in the four-race Championship series, but also because of the wildcard entries that promised to stir things up, and we we right. One of the wild cards, Flora Duffy, ended up dominating the women’s race and the overall title for the women was decided by just a point.

In the men’s race, a five-way battle for the overall title came down to the run as Alex Yee managed to sprint his was from third to first in the overall standings.

Duffy takes the day, Taylor-Brown gets the title

Olympic champion Flora Duffy arrived in Malibu as a “wildcard” invitation and was the only athlete in the field who didn’t race last weekend – and it showed as she took all three of the races in today’s Eliminator. The other wildcard in the race, Lucy Charles-Barclay led the way out of the water in the first race and earned herself a “short chute” shorcut to be used later in the race, but struggled out of T1 and was unable to join the lead group of three that included Duffy, Learmonth and another strong swimmer, Vittoria Lopes. Duffy would take the second short chute by leading the women off the bike in the first race, then followed that up with a strong run that saw her easily take the win of the race over Taylor-Brown, Learmonth and Charles-Barclay.

In the second race Duffy led the way out of the water and, once again, Charles-Barclay struggled with her transition to the bike and missed the breakaway – this time it was Duffy and Learmonth who got away on their own. Those two would cruise through the run as Duffy would once again cross the line first ahead of Learmonth with Taylor-Brown not far back in third.

Duffy looked to be leading the way out of the water in the third race as well, but Charles-Barclay caught a wave just before the end of the swim and would end up getting onto the beach ahead of the Olympic champ. Once again Charles-Barclay missed the lead group on the bike and would eventually end up being eliminated after the bike as she fell back in the field. Up ahead a group of four went clear – Duffy, Learmonth, Taylor-Brown and American Katie Zaferes. Once again Duffy led the way off the bike and, along with Zaferes and Taylor-Brown, pulled away from Learmonth almost right from the start of the run.

Duffy would use her “short chute” advantage early on the run rather than wait until just before the finish line, allowing her to open up a gap that she maintained right to the line, taking the win. Taylor-Brown would stay in second, with Zaferes holding on to third, which meant that Learmonth, who had won all three of the other races in the Super League Championship Series this September, would end up one point away from the title as her friend would nip her for the overall series win.

Yee sprints to a huge win

Wildcard entry Kristian Blummenfelt, the Olympic gold medalist, powered his way to the wins in the first two races, but that didn’t mean much as the men headed into the final race with all of the contenders – series leader Jonathan Brownlee, Hayden Wilde (second), Yee (third), Vincent Luis (fourth) and Vasco Vilaca (fifth) – all putting themselves in contention. Luis appeared to be leading the swim, but it was Tayler Reid and Marten Van Riel who were able to capitalize on a wave coming into the end of the the 300 m effort that would end up on the beach in first.

Out on the bike the contenders all managed to stay near the front, setting up a 1.6 km road race for the win. Having won the bike “short chute” prize in the first race, Van Riel set himself up to take the win with a bit more than 400 m of running to go, but Wilde and Yee surged back up to his shoulder in the last few hundred meters, setting up a sprint for the win and the title. Wilde would drop off just before the end of the race and Yee would somehow find enough of a gear to get a few tenths ahead by the line. Vilaca managed to run his way to third, which moved him up a spot in the overall standings, while Wilde’s fourth-place finish nailed him second in the standings. Blummenfelt would end up fifth, Luis sixth and Brownlee was seventh – he would end up rounding out the podium in the overall standings. 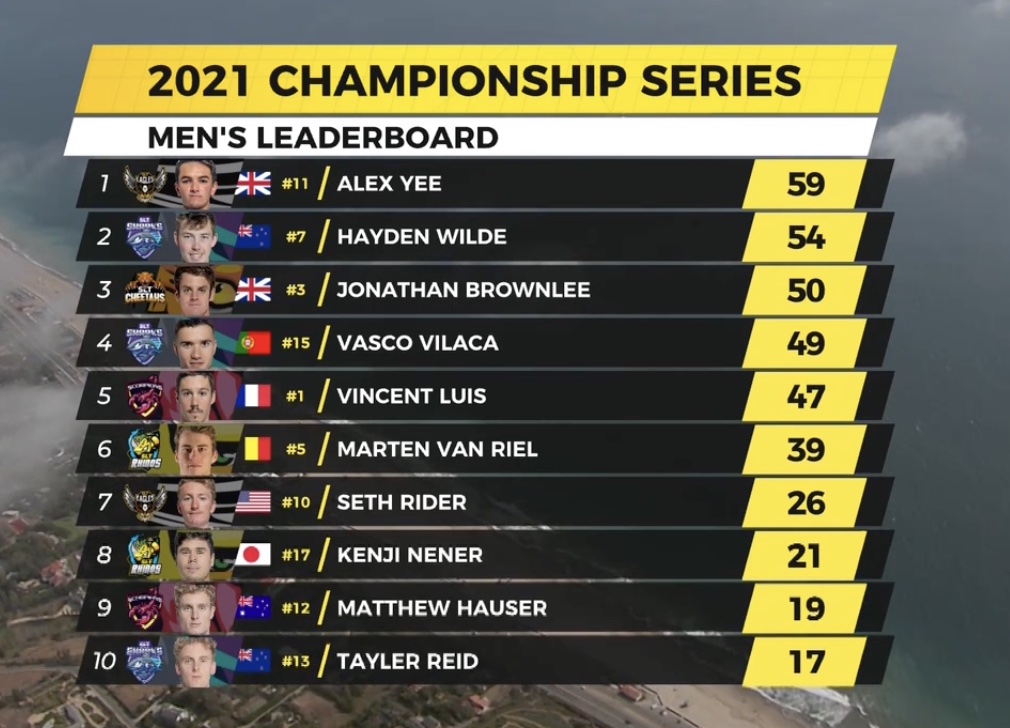