With a home-country hero (and an all-British podium) in the women’s race, along with an exciting men’s race stacked with Olympic stars, Super League Triathlon kicked off its four-week season in style in London this weekend.

The racing in London took the form of the Triple Mix – a 300m swim/4km bike/1.6km run followed by Stage 2’s run/bike/swim and Stage 3’s bike/swim/run.

The women’s race came down to the final stage as Jess Learmonth, Georgia Taylor-Brown and Vicky Holland found themselves in a race for the spots on the podium. Taylor-Brown, who crashed on the bike during stage 2, found herself unable to match Learmonth’s swim speed, which allowed Learmonth to pull far enough clear before the final run to set up her win.

“At the end of Stage 2, I started to regret coming!” Learmonth said after the race. “It was so hard and boiling hot that it was horrendous, especially on the run course and its cobbles. I was hoping for the best on some of the bike leg’s tight corners, and I think I took too many risks. But I loosened up on the final swim and gave my legs a rest, and I’m now looking forward to the next few weekends of Super League racing.”

Like the women the men’s race came down to a stage 3 showdown between Olympic bronze medalist Hayden Wilde (NZL), France’s Vincent Luis and Great Britain’s Jonathan Brownlee. With Wilde trailing the Frenchman and Brit on the final run, he used his “short chute” (after winning the first leg of the race, Wilde had a “bonus” shortcut he could take during the run) to move into the lead and run to the win.

“I knew I had to get as close to Vincent and Jonny as I could before playing the Short Chute card, before giving it a big surge for the final 500m,” Wilde said after the race. “I knew Jonny was going to be the man to beat as half of Leeds seemed to be here as well, so it’s awesome to beat him as he’s a legend.”

Super League Triathlon has also introduced a team competition this year – the Sharks, Rhinos, Cheetahs, Scorpions and Eagles were all competing against each other for points, too. After this weekend’s racing the “Eagles” are in first place. 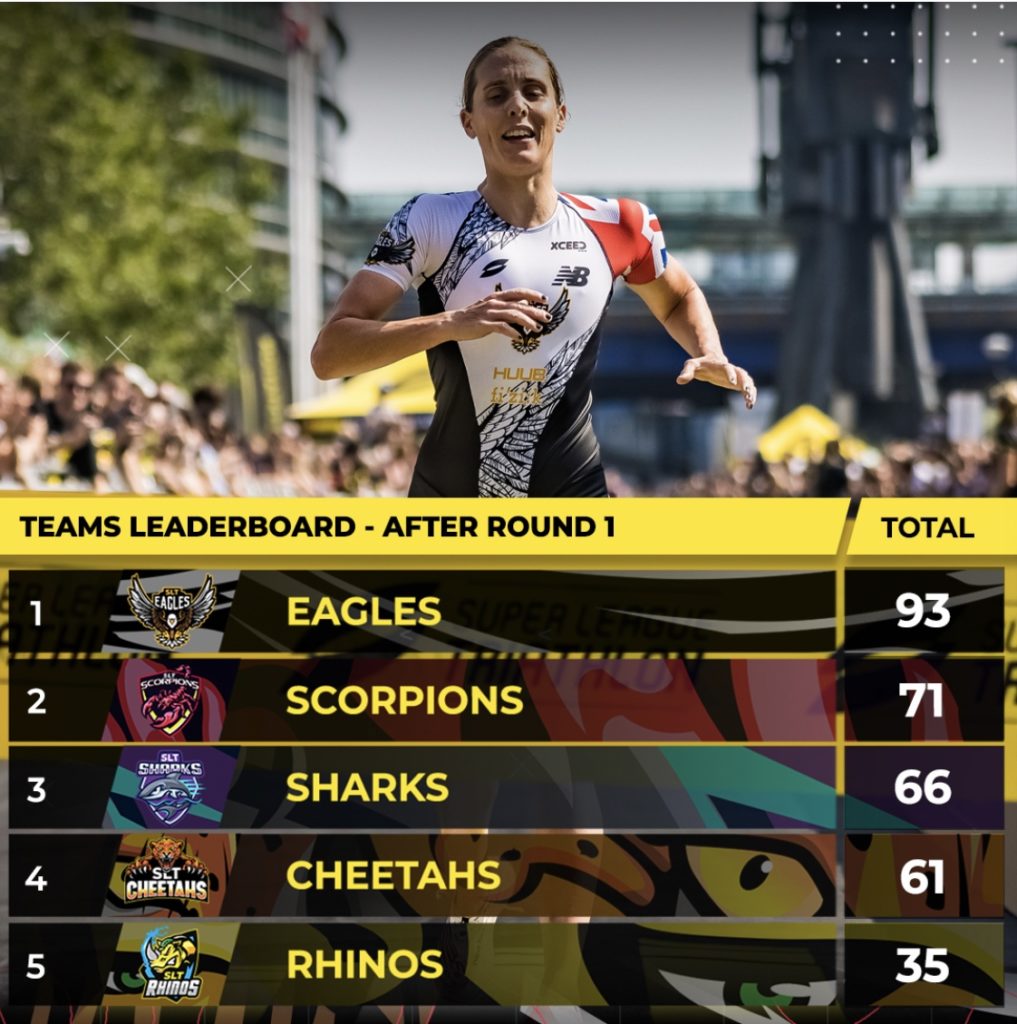