The inaugural Couples Championship held just outside of Tampa Bay, Florida turned out to be a huge payday for some of the sport’s fastest couples, but the live coverage ended up leaving many fans frustrated. While commentators Greg Bennett and Heather Jackson did their best to provide as much insight as possible, the lack of timing splits and shots of the athletes in action made it difficult to keep track of the action, making it hardly seem worth the $14.

Despite the challenges of the live coverage, the event did make for some exciting racing. The race consisted of each partner completing a 400 m swim (although, in the end, it was reported that was closer to 600 m), 16 km bike and a 5 km run. The couples could pick which partner they wanted to lead the way, with three couples opting to send the women off first.

After some confusion at the start, Eric Lagerstrom, Paula Findlay’s partner managed to make up the few seconds he had been left behind to swim his way up to join a group of three who would lead the way out of the water, joining Aaron Royle and Canadian Olympian Matt Sharpe.

By the end of the second swim Stanford was still in front with Kasper close behind. Pierre hung on in third, but Findlay had managed to swim herself to fourth place. Out on the bike Stanford stayed in front of Kasper for most of the ride, but the American pulled ahead in the last few kilomtres of the bike to lead the way out onto the run course by about 10 seconds. Findlay moved to third by T2, starting the 5 km run 45 seconds behind Kasper, with Pierre hitting the run course 1:20 behind the leaders.

Out on the run it was Stanford who proved to be the fastest on the day, pulling ahead of Kasper to take the win and the $100,000 prize by about 15 seconds. Kasper would take second ($20,000), with Pierre managing to outrun Findlay for the final spot on the podium and the $10,000 third-place check.

Of the teams that chose to send the woman off first, Seth Rider and Roksana Slupek fared best with the sixth-place finish, while Rachel Klamer and Richard Murray would end up eighth.

After her partner Josh Amberger ended up with visa problems and had to head back to Australia, Ashleigh Gentle ended up joining the celebrity charity relay team, running the first 5 km leg along with swimmer Brooke Bennett (a three-time Olympic champion), cyclist Matt Gaimon and 2016 Olympic gold medalist Gwen Jorgensen. Race organizer Ben Atkins from Waterfall Bank was to donate $10,000 to charity for every team that beat the relay. 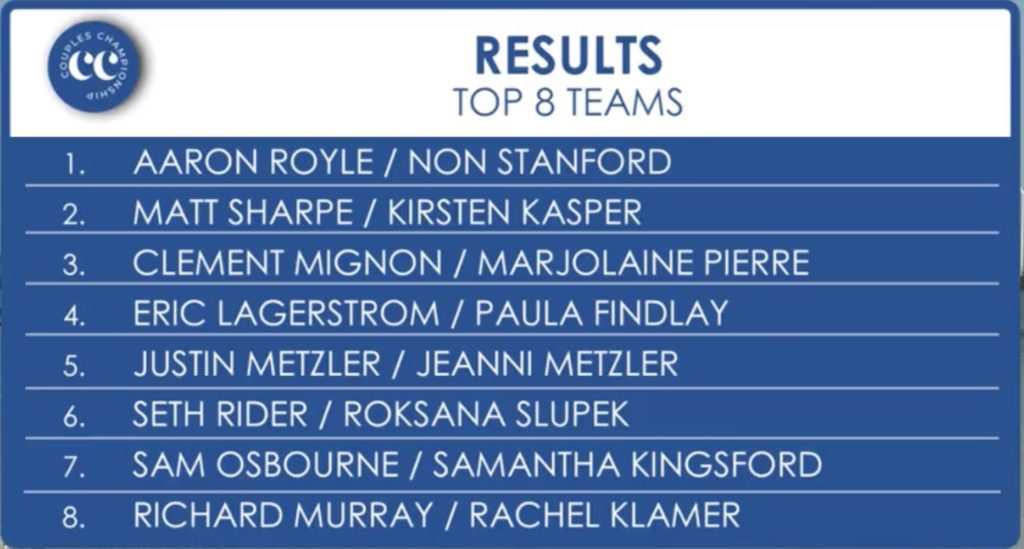