So what can we expect on Sunday? Here’s everything you need to know:

What are the current “world bests” for the full distance?

Blummenfelt’s 7:21:12 set at Ironman Cozumel last year has been recognized by Ironman as an official time, despite the down-current swim. The next two fastest times on record are both held by Jan Frodeno – he went 7:27:53 at the Tri Battle Royale last year, and before that had gone 7:35:39 at Challenge Roth in 2016.

Where is the event happening?

The bike and run will take place at Germany’s Dekra Lausitzring in northern Germany. The swim will be a point-to-point effort across Lake Senftenberg, which is about 10 km away from the race track.

Canadians will either have to get up really early, or not go to bed on Saturday night to take in the entire event. The women start at 7 AM local time in Germany.

How can you watch it?

The event will be streamed live on the event website.

How does it work?

The goal for the event is pretty obvious – breaking the seven- or eight-hour barrier for a full-distance event. Any times set won’t be records because the athletes are allowed to draft in all three disciplines. There are no restrictions on equipment, other than there can’t be any sort of propulsion provided. (Stay tuned for a more in depth look at Blummenfelt’s Cadex bike later today.) The athletes can have up to 10 pacers to help them through the race. Those athletes can help in all three disciplines – some of the pacers will double up and help in multiple sports.

Skipper and Blummenfelt will be supported by a number of pro cyclists on the bike, with Alistair Brownlee pacing Skipper for the swim and German marathon champion Frank Schauer helping the Brit during the run. Gustav Iden will be on hand to help Blummenfelt for the run.

Matthews will also utilize a number of pro women cyclists to help for the bike, but will also have help from triathletes Ruth Astle (recently fifth in St. George) and India Lee, who will help pace during the swim. Spirig’s crew includes a number of triathletes who can help in all the disciplines including Els Visser, Imogen Simmonds, Malanie Maurer, Luisa Baptista, Amelia Watkinson and Lucy Buckingham.

Can it be done?

In theory, with eight bike pacers and the super-fast course, breaking seven and eight hours should be attainable. The biggest time gains are to be made on the bike, of course, but potential benefit of not having expended as much energy on the bike could help the run times, too. Here’s a breakdown of the goal times the athletes have set, courtesy of the Sub7Sub8 Instagram page: 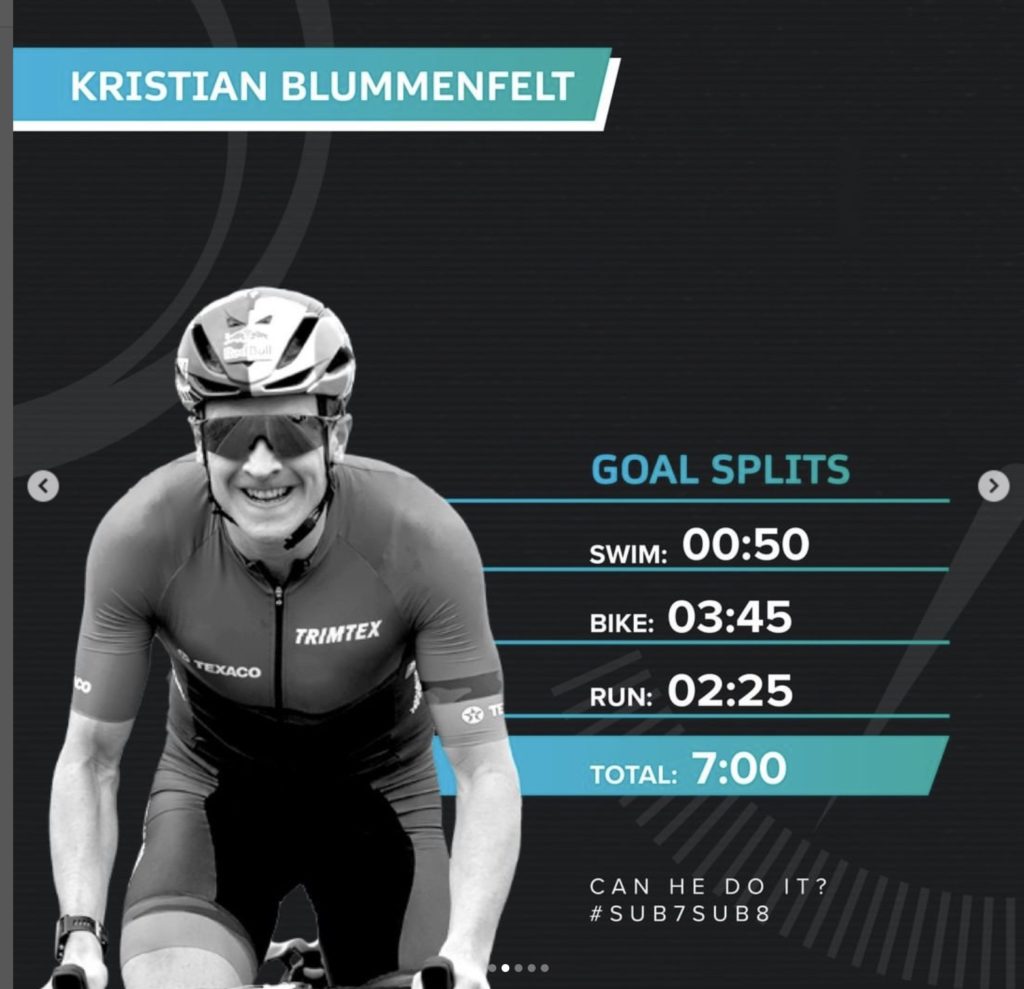 At the pre-race press conference Blummenfelt said he felt more confident heading into Sunday’s effort than he did before the Ironman World Championship St. George. He’s looking to run a 2:25 marathon on Sunday, which is a 10-minute drop from his Cozumel run time. His swim time will likely be slower than Cozumel because he won’t have the strong current to help, but with the potential to drop lots of time on the bike, if he can run that fast the sub-seven mark would seemingly be attainable. As you can see from the predictions above, he’s setting his pacing right at the seven hour mark, with the goal of dropping the run pace later in the run if he’s feeling good. 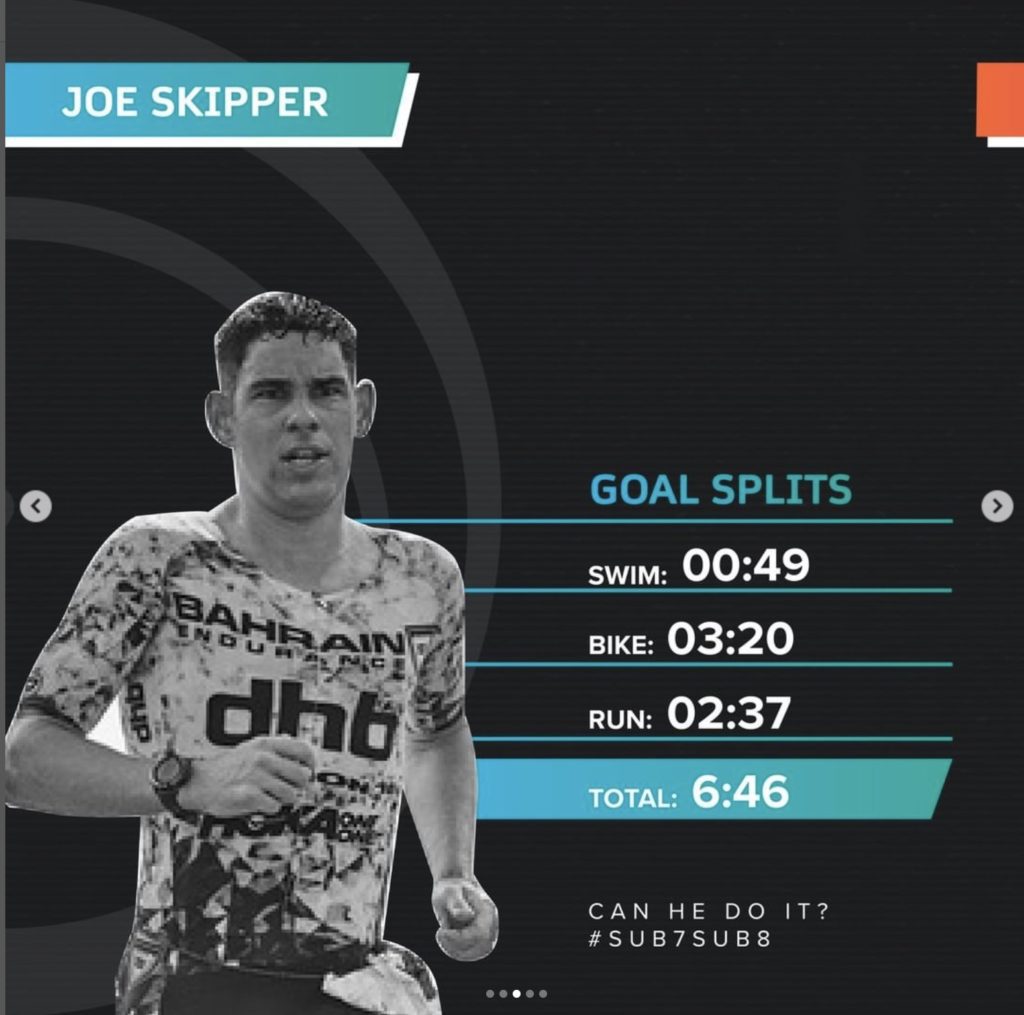 Skipper, on the other hand. is looking to rip things apart during the bike leg. The question will be whether or not riding that fast will still allow him to have enough to hold things together through the run. 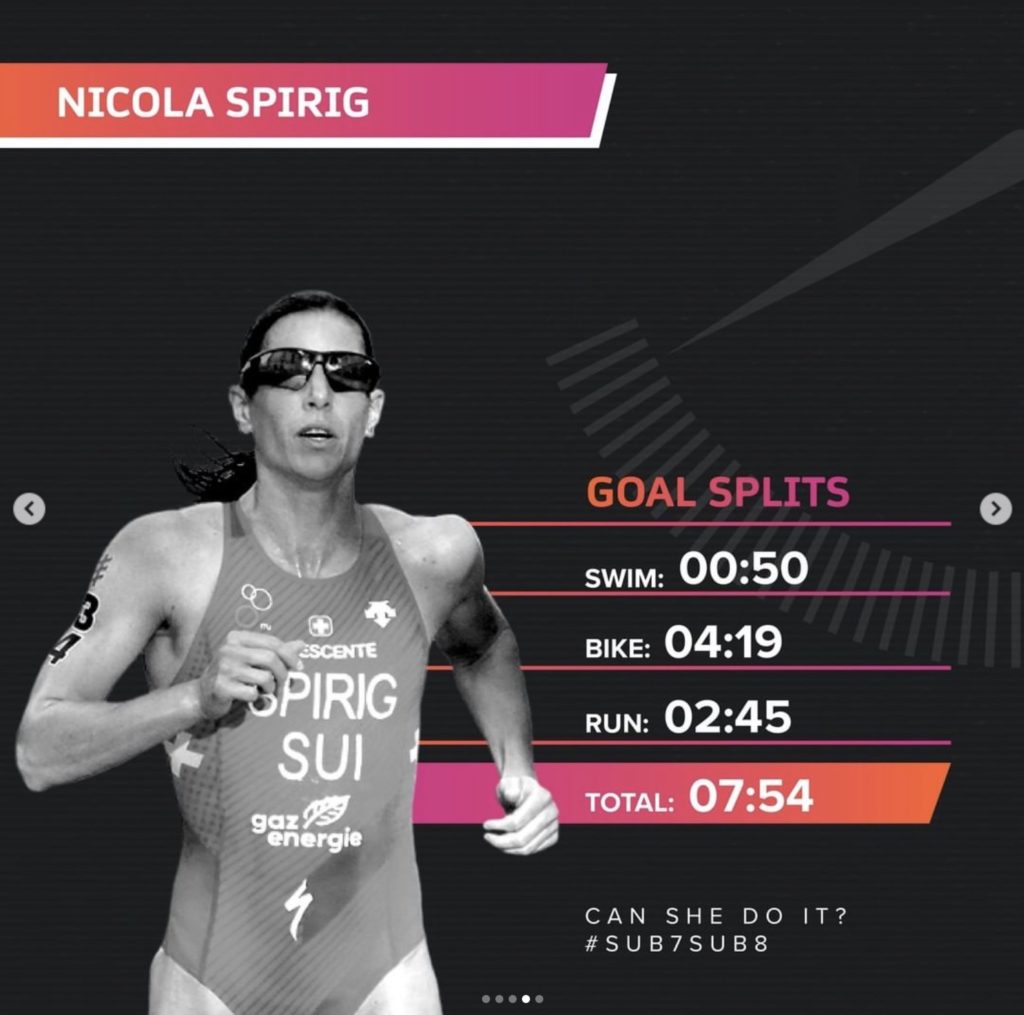 Like Blummenfelt, Spirig has been more conservative with her bike goal, hoping to have enough in her legs to run a fast 2:45 marathon to break the eight-hour barrier. Since she’s coming off a broken shoulder sustained in a bike crash this winter, the swim could pose a bit of a challenge for her on Sunday. 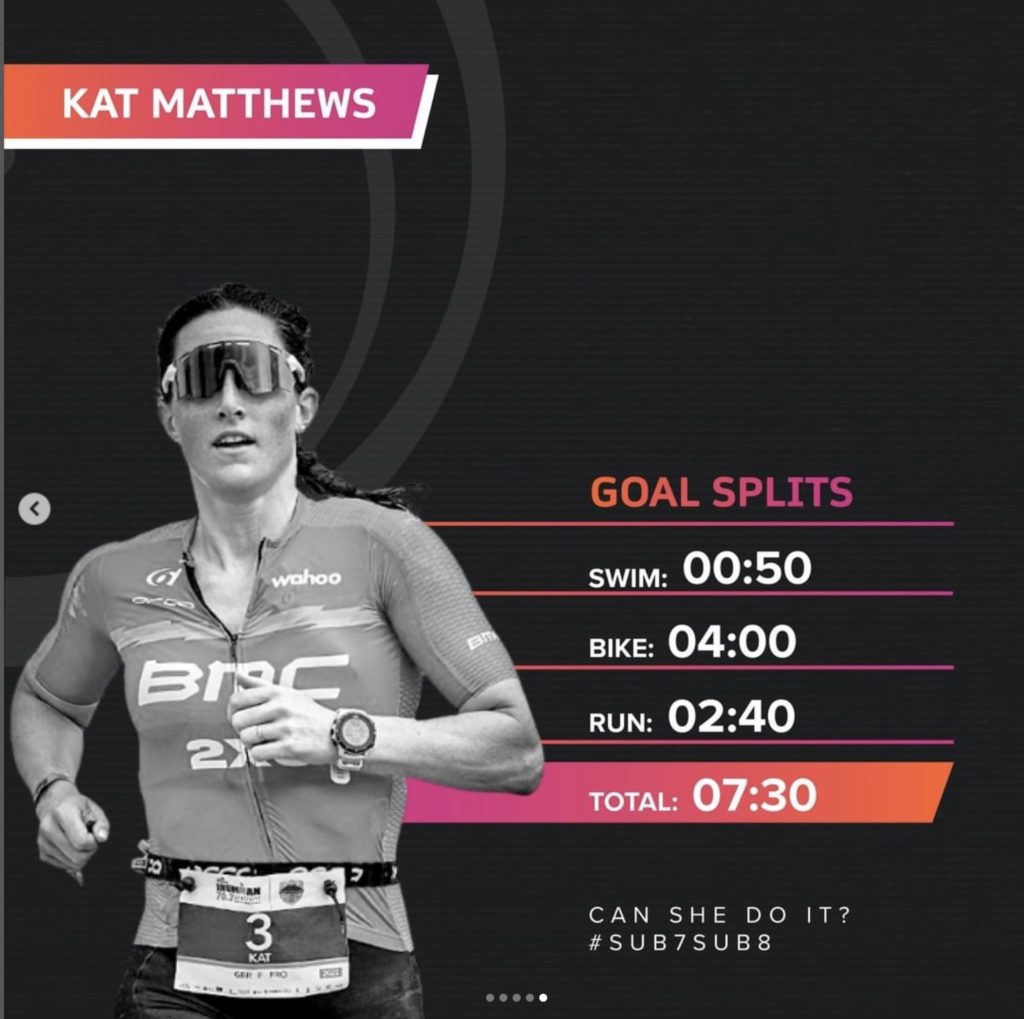 Like Skipper, Matthews is looking to hammer through the bike, then follow that up with a scary fast marathon to blow the eight-hour barrier completely. That pacing seems a bit ambitious, but if biking with a big group allows her to ride that fast, she’ll have lots of time to play with on the marathon.

In the end the big question will be just how much time they can save during the bike. In addition to working well with their pacers, they’ll need the weather (especially the wind) to cooperate in order to finish the bike as fast as possible, having expended as little energy as possible.

Now all we have to do is tune in on Sunday to see if they can make it happen.