We featured John Yip as one of our “Triathletes who made a difference” in our January issue. Now he’s taken on a new challenge that’s attracted the interest of our sister publication, Canadian Running Magazine.

When the COVID-19 pandemic first hit, John Yip needed an escape from his everyday life working as the CEO of Kensington Health, a non-profit healthcare organization in Toronto. An avid triathlete with no races to train for, Yip decided on an individual challenge, and he began running all around Toronto with the goal of covering every one of the city’s streets. Now, close to a year later, he has run a little over 10 per cent of Toronto’s more than 10,000 streets (he tracks his progress on citystrides.com), and although he still has a long way to go, he is as motivated as ever to carry on with this project and chip away at the entire city.

1/ In March, when the 1st wave of the pandemic, the world changed. My work life got stressful and I needed a way to cope.

“I used to just do six set routes,” Yip says. “I would choose routes that avoided traffic lights and busy roads.” This quickly changed after Yip began his every street project, and he soon found himself running in parts of the city he didn’t even know existed.

“I even started to see things in my own neighbourhood, like 1 km away, that I didn’t know were there,” he says. Early in his project, Yip ran to work every day. After knocking off all the routes from his home to work, he began driving in early and running around downtown Toronto.

“I’m not just running the streets, but the laneways, too,” Yip says. Laneways are the narrow streets that branch off from the city’s main roads and access garages or backyards. “The laneways are named after historical figures or local people from the neighbourhood. There are Italian names, Jewish names, Asian names. It reflects the texture of the neighbourhoods of downtown Toronto.”

Yip says he tries to remember a few things from every run, like names attached to laneways, which he then looks up. He also records his runs through photography, snapping shots of graffiti he sees around the city. “The artwork is stunning,” he says. “Take Graffiti Alley, for example. That’s about a kilometre-long strip of laneway near Spadina and Queen. It’s just wall-to-wall graffiti.” 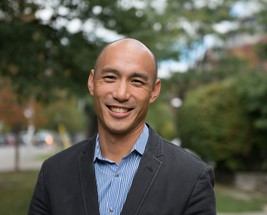 Yip says he is part of a group of about a dozen runners working toward running every street in Toronto. “I haven’t met the bulk of these people, but we follow each other on Strava and comment on each other’s runs,” he says. “It’s created this community. We don’t care about pace, because we’re all exploring.”

Yip says he is far more interested in seeing and discovering new places than hitting a certain mileage or average pace. “I’d say 90 per cent of the routes I’ve run so far are completely new to me,” he says. “I had never seen these parts of Toronto before. Not driving, not cycling, not running — never.”

Over the last month I have run 42.2k+ through the laneways of Chinatown, Kensington Market and Little Italy – am stunned by the artwork on the garages #toronto #running #runeverystreet #marathon #graffitiart @CanadianRunning pic.twitter.com/txdwGzHjg9

With every run, Yip posts his route on Strava and adds the photos he took along the way. “I just love looking back at the pictures and streets I’ve run,” he says. “The last 10 months have really shown me how vibrant the city really is.”

With close to 90 per cent of Toronto’s streets left to run, Yip’s project is far from complete, but he’s in no rush. He, of course, has his eyes on running the entire city, but the challenge was about giving himself a break from everyday stressors during the pandemic. “If there’s a silver lining for this past year, it’s that my world has opened up dramatically,” he says. “And as a result, it has given me daylight when it’s been dark since the pandemic started.”

To follow Yip’s progress, head to his CityStrides profile or check him out on Strava.