There’s been lots of talk about whether or not Lionel Sanders arrives in St. George, Utah for the first of two Ironman World Championship events this year as one of the favourites. He’s excelled on the St. George 70.3 course over the years, with three wins and a runner-up finish. The day will be without the humidity that has seen him struggle so many times on the Big Island in Kona, too.

While expectations might be high, Sanders appears more relaxed than ever heading into Saturday’s race. We caught up with him last night for one final pre-race interview:

Lionel Sanders: It’s a different feel – it just doesn’t have the grandeur of Kona. It’s not as concentrated – in Kona you’re literally seeing everyone every time you go for a run. Thousands of athletes, whereas I’m out here by Sand Hollow and I don’t see anyone.

I have been doing it quite a while now. I’ve had some humbling, humbling experiences and I just know what to expect now. I know what world championship racing is like and I know my limitations, I know the training I’ve done and what I can expect from myself. There’s nothing to be nervous about.

I’ve been telling everyone who will listen that this is your best chance to win an Ironman World Championship. Do you see it that way?

As a heavy sweater, Kona is always going to be a problem. But then I talk to Kristian Blummenfelt and he sweats at the same race as me, and he feels he can win Kona. So that’s not really a good excuse to now win Kona. In training with him I have been inspired because he weighs more than I do, he sweats equal to what I do, and he can drink water like no one I have ever seen drink fluid. So I have to go back and learn to drink more – that’s the secret I guess.

It’s a Mano-0-Mano type course – 60% of the course will be at a two % grade or better. So when you are putting power into the pedals, your forward momentum is coming from your power and not from a draft. I am pretty used to that style of racing … it’s probably my best shot, but my goal has always been Kona – that’s my dream.

Should you be able to win a world title with a swim deficit? It’s an interesting question. It’s a bona fide professional sport, and you shouldn’t have a weakness … Jan had no weakness, but now there are many more guys who have no weakness. Even if you are really, really good, you might be finishing eighth or 10th.

Even in Oceanside last month I didn’t feel like I could run anywhere. It’s just when the gun goes off I will give you my best. The game is changing – the swim is being pushed really far, the bike is being pushed really far, the run off the bike is pushed far, the science is being pushed far, and I’m doing a good job. I’ve got a good coach in Mikal Iden who is understanding of all these concepts, but I might not be as good as these guys, and I’m totally cool with that. It’s the natural progression as an athlete – if I can win it, I will win it. If I can’t, I’m good with that, too, just give me your best effort. 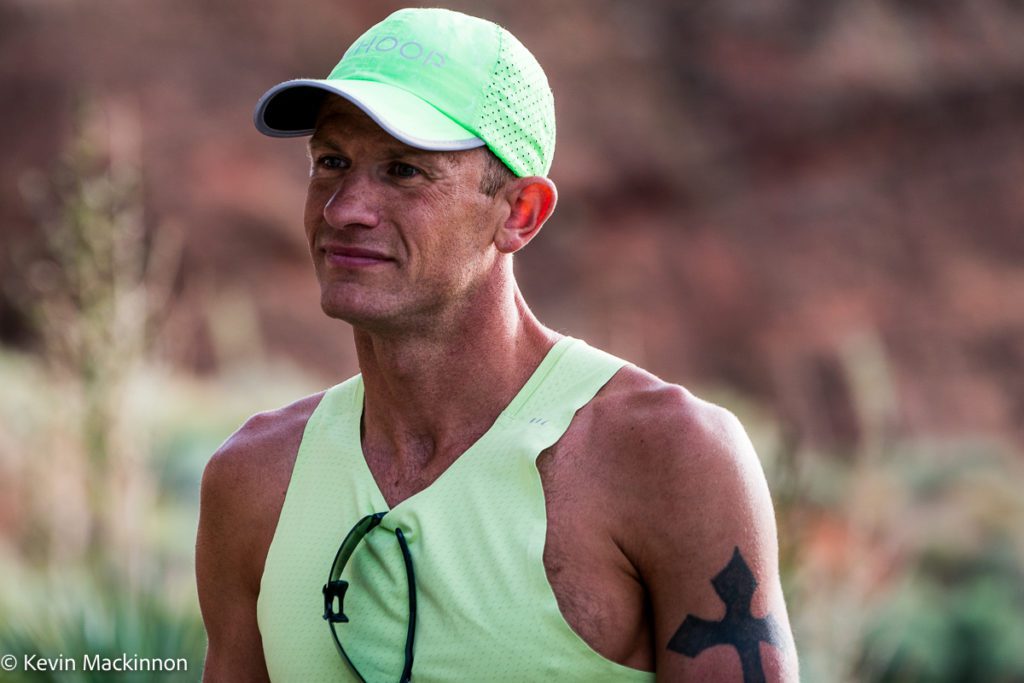 You started working with Mikal Iden last year. How has that helped you?

I connect really well with him. He’s observing Kristian and Gustav every single day. They are the top contenders right now. He’s not babying me in any way. When he does tell me I’m doing well, it really means something. It’s also the accountability. If you want to be the best in the world you have to do some pretty amazing things. That takes time. I’ve kind of pissed around for a few years doing incorrect training methods for a few years. Then the other side of the puzzle is that scientific aspect … in that I was doing tons of anaerobic training. My logic there was that in order to go fast for long you have to go fast for short. It was a misunderstanding or ignorance. He enlightened me that there’s specificity involved, too. Your intervals should very much imitate the race, especially in terms of muscle fatigue. I would go into these races and do 400+ watt intervals for five minutes, maybe 10 times. And then you expect to exert 310 watts for four straight hours and you’ve literally spent no time pushing 310 watts. How is that logical.

Related: Lionel Sanders – I am fighting the desire to destroy myself early on

It feels like you’re selling yourself a bit short – all that work and training has provided some invaluable experience.

You will call on all of your experiences. This isn’t the end for me. I think two or three years will be my peak, now that I’m on the right training path. What’s comical is that I was on the right training path early on. The way these Norwegian guys are training, that’s the way I trained early on. I listened to everyone saying ‘you’re overtraining, too much volume, stop doing an Ironman every day’ – that’s what Kienle said to me – and what’s funny is I’m back almost identically to how I was training in 2015 and 2016.

Did you ever imagine that you would get to this level? I can still remember interviewing you at the Second Cup in Westdale (Hamilton) when you were just starting.

I think it’s a testament to when you devote yourself to something, and you’re passionate about something, and you’re open to growing and learning, you can go far. I’m not very talented, I feel like I’m a hard worker and I’ve learned a lot of lessons. I’ve surrounded myself with really good people who teach me a lot, and that’s been a problem because I don’t listen, but I’m starting to listen a lot more and it’s really just a bi-product of that. I have a lot of great people around me.