Cameo offers a way to connect with actors, athletes, musicians and other public figures directly. It’s a simple concept and one well-timed for the current reality. If you can’t mark a special milestone in person, sending your friend’s favorite celebrity is the next best thing, right? Well, some Cameo users are finding more creative uses for the service.

How does Cameo work? You pay a set price and get a personalized video from a celebrity. Send them the details, and they’ll record a message for, well, anyone you want. 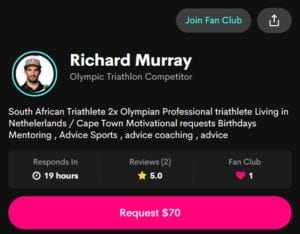 South African pro triathlete Richard Murray is registered with the service, as are Australian pros Ellie Salthouse and Emma Jeffcoat. 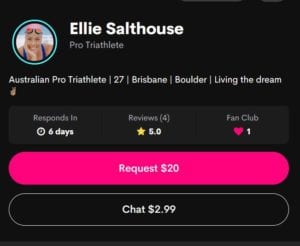 As of now, there are 31 cyclists registered with Cameo. Lance Armstrong, George Hincapie, Philippe Gilbert, Sonya Looney, Lachlan Morton, Courage Adams, Christian Vande Velde and more are featured on the app. Even Canadian freeride legend and announcer Brett Tippie is on the platform.

Related: Why we can’t (or won’t) let Lance Armstrong go

The videos can act as e-cards, birthday wishes, words of encouragement for a race, congratulations on an engagement or a get-well message to an injured friend. Some users get more creative with their message requests, using the Cameos to ask the VIPs questions, promote businesses or to roast friends.

Recently, there has been a new trend of paying a celebrity to break up with a significant other via Cameo for you. Does it dampen the blow, or does it ruin the celebrity for the person on the receiving end of the message? The jury is still out.

According to Facebook relationship status data throughout the year, breakups peak at the end of February and beginning of March. For some reason Sugar Ray frontman Mark McGrath has become the face of Cameo breakups. But, for the cycling-obsessed, who better to take over from him than controversial cycling icon Lance Armstrong?

Armstrong’s Cameos to date have been very tame, but, for $300, if you have an important message why not get him to deliver it for you?

Or maybe, for the kind of news that will land like a punch in the gut, Brian Lopes is your guy.

Alternatively, if you’re feeling particularly frivolous with your money, EF’s resident cool-guy Lachlan Morton is listed at the reasonable price point of $1,000 USD.