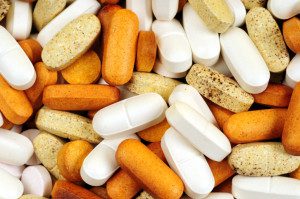 There’s new research against the benefits of some health supplements.

A new paper published from the Norwegian School of Sport Sciences has found that athletes supplementing with vitamin C and vitamin E had worse results after an eleven-week stint of endurance training than those who took a placebo.

Fifty-four men and women were randomly divided into a group who took 1000 mg of vitamin C and 235 mg of vitamin E each day or a group who were given placebos. Both groups followed an endurance training program and did workouts 3-4 times each week for eleven weeks. Most of the exercise was running.

All the participants had blood and muscle samples taken before and after the study, as well as actual fitness tests. The results between the two groups were largely similar, but the supplemented groups saw a decrease in the building of new cell-powering mitochondria from exercise.

“Our results indicate that high dosages of vitamin C and E — as commonly found in supplements — should be used with caution, especially if you are undertaking endurance training,” said lead author Goran Paulsen.

The researchers have ideas about what may have caused the results, but also note that that further research is required to understand exactly why the vitamin C and E supplements are slowing the production of mitochondria.