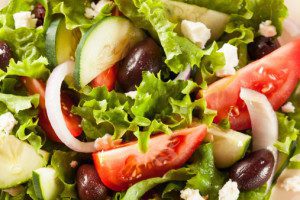 Hemp hearts are shelled hemp seeds.  They contain a plethora of essential fatty acids and amino acids.  Essential fatty acids are those which your body is unable to produce.  They include linoleic acid (omega-6) and linolenic acids (omega-3).  When eaten in the right proportions they help your body to distribute and process food more effectively.  The ideal ratio is four to one omega-6 to omega-3 which is what is found in hemp seeds.  Most people have an adequate amount of omega-6 in their diets so often it is omega-3s that are lacking and hemp seeds can address this imbalance. The second health benefit of hemp seeds is the abundance of plant sterols which helps to lower cholesterol levels in the body.  They also contain vitamin C, vitamin E, carotene vitamins B1, B2, B3, and B6, potassium, calcium, iron and magnesium. 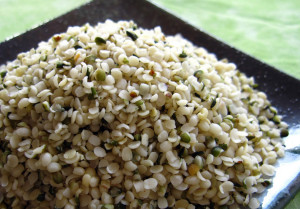 Hemp hearts are gluten free and vegan so they have a place in nearly every diet.  Proponents advocate eating them early in the day to normalize blood glucose levels throughout the day.  Although the greatest benefit of the hemp seed is realized when they are eaten raw (in a smoothie or on salad are good methods), they do tolerate cooking well and can be added to a number of baking and cooking recipes.  Here is a lunch salad recipe to try: Hempy Vegetable Salad with Feta 1 cucumber chopped coarsely 2 tomatoes chopped coarsely 1 red pepper chopped coarsely 1 red onion caramelized (chop coarsely then fry in olive oil until translucent, browned and later, caramelized – then cool) 1/2 cup kalamata olives 1/2 cup feta cheese 1 cup hemp hearts 3 tsp apple cider vinegar (or red wine vinegar) 2/3 cup water 1 clove garlic 1 tsp oregano salt and pepper to taste Chop onion coarsely and fry in 1 tbsp of olive oil over medium heat until onion is browned and translucent.  May take 10-15 minutes.  Don’t overheat.  In the meantime, chop the rest of the vegetables and place in a bowl with 1/4 cup of feta on top.  (Fermented cheeses have vitamin B12, good for red blood cell production.) Place olives on top. Place 1 cup hemp hearts and 2/3 cup water in blender and process until smooth.  Add 1/4 cup feta to blender with pressed garlic, vinegar, oregano and salt and pepper and process until smooth and creamy. Pour dressing (not necessarily all of it, to taste!) over vegetables, olives and remaining feta and toss.   You may add additional protein such as fish or chicken to your salad. Voila!  Lunch!