I thought a food diary of what I ate leading up to a race (Ironman Boise 70.3) might be interesting to share.  There is really no magic formula.  What you eat 24 hours before the race is important, but so is all of the food, hydration and sleep you had the day the days prior to that.  I would focus a lot of energy on getting adequate sleep two nights before the race and having very good nutrition two days out.  However, you certainly can derail your race success if you get overly experimental and end up with a very sore tummy on race morning if your pre-race meal isn’t right.  In general, it’s best to stick with what you know.

I thought I would also compare what I ate to what Brent McMahon ate since he and I were hanging around the days before the Ironman 70.3 event in Boise.  Many of our food choices were the same but there were some significant differences. I ended up choosing to eat the same thing for two dinners in a row leading up to the race.  Generally, I would prefer more variety but I was way too lazy to cook, the Whole Foods in Boise is a marvel to experience and the choices did not rotate in the hot food bar.  I also have a sentimental preference to these food items as I ate exactly this at a fancy market near Everett with Sam McGlone before I won my first 70.3 event at Lake Stevens. Yay for macaroni and cheese!

The day before the race I started with a super light meal of a piece of banana bread from Mana Foods in Maui and a greek yogurt.  I basically got up, made an electrolyte drink and had a little snack before our easy workout. 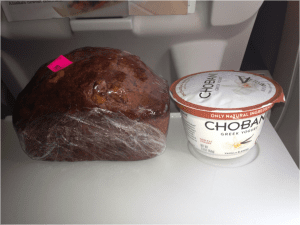 Friday afternoon before the Saturday at 12:00 noon start, Brent and I had our first Whole Foods feast.  We both chose macaroni and cheese with pulled pork.  It seemed like a great day for a barbeque feast, I guess.  Brent ate his with potato salad whereas I chose the raw kale salad.  We discussed this difference and Brent feels that he is best to avoid raw vegetables and fiber in the closing hours before racing.  For me, I feel like my digestion is much better if I continue to eat the amount of vegetables I normally do despite the fact my body might have to spend a bit more energy digesting.  I eat a lot of raw and cooked vegetables all of the time so if I cut them all out I feel terrible.  So no plain white food for me the days before the race, I need some greens as well. 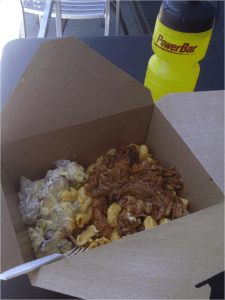 This was Brent’s lunch with the potato salad.  Mine had a bright green kale salad on the side.

My snacks for the day included mostly watermelon.  I don’t know why but watermelon is my favorite rehydrating snack and I have no problem digesting it.  Some people don’t love it but it is my favourite.  I had one of the tubs this size the day before the race. 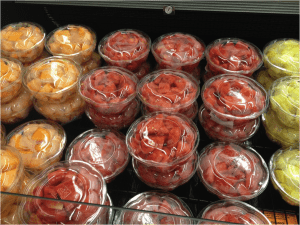 For dinner, Brent had his regular rotisserie chicken and rice while I went for round two of macaroni and cheese with a small piece of chicken and some arugula.  I paired this with three bottles of the bubbly water they had over the course of the day and two bottles of Powerbar perform between the training I did and post training sipping. 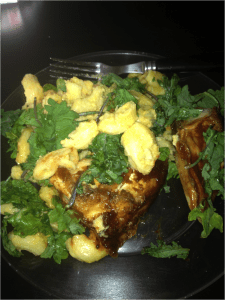 My pre Boise dinner was macaroni and cheese, chicken and arugula.

Race morning, Brent was staying for the late start at my homestay since I was closer to T2. I ended up having just 2 pieces of toast with almond butter plus a coffee and by the time the race started- 3 bottles of perform!  I was up too early I guess.  I tried to eat some scrambled eggs with Brent, since his breakfast of choice is oatmeal and scrambled eggs, but I couldn’t stomach them.  I think part of the reason was Brent eats within 2 hours of the start and by that time I have too much nervous energy to eat anything and part of it was that I really had eaten enough when I ate the toast.  I think toast and nut butter has been my breakfast of choice through my mountain bike racing career, to XTERRA and now to Ironman 70.3.  I bet it would work excellent for Ironman as well. 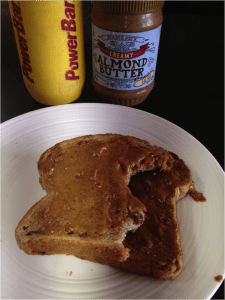 So then it was off to the races and I had another bottle of Perform before the start along with a Powergel 15 minutes before starting the swim.  My buffet of nutrition for the race included two more large bottles of Perform and 9 more Powergels between the bike and the run.    There were also two water bottles from the feedzones on the bike and numerous tiny cups of water and coke during the run.

After the race I had a small recovery drink while in the ice bath before hitting the massage table.  Then I rode home for a shower and actually felt fairly good for a hard run on concrete. Since the race was so late in the day, a group of the pros all met for dinner.  Guess what everyone chose as their post- race recovery meal?

Macaroni and cheese FTW on both the men’s and the women’s side at this race.

Hope this was helpful.  This is a photo of my post-race cheat foods just to prove that I like more than just macaroni and cheese. 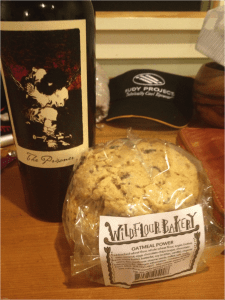