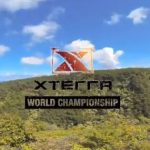 More than 800 endurance athletes from around the world participated in the 18th annual off-road triathlon on the island of Maui. The course consisted of a 1.5-kilometer (1-mile) rough water swim, a 30.4-kilometer (18.89-miles) mountain bike and a 9.5-kilometer (5.9 miles) trail run best described as a tropical roller-coaster ride through pineapple fields and forests.

Here is the highlight video from the 2013 XTERRA World Championship: