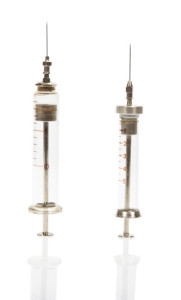 Operation Cyber Juice is taking the juice out of juice bars.

The United States Drug Enforcement Agency announced Wednesday it had raided and made major seizures of assents in a nation-wide performance enhancing drug ring. The DEA arrested 90 people connected to 30 different investigations in the country and seized over $2 million in cash and assets, according to a press release. The seizures came from 16 different steroid labs across the country, including a juice bar located inside an LA Fitness in Phoenix, Ariz.

“This multi-agency collaboration sends a strong message to those who traffic in illegal and dangerous performance-enhancing drugs,” said the executive associate director Homeland Security Investigations, Peter Edge, in the press release. “There’s no question that our joint efforts among HSI, DEA and Interpol targeting a very significant drug distribution network will have a huge impact on the distribution of illegal steroids and other dangerous performance-enhancing drugs in the United States.”

Beyond cycling, PED use in track and field and road running has been a topic at the forefront of conversation recently, with some of the world’s largest stars failing drug tests and European allegations of widespread use within the sport. Four of the men in the men’s 100m final at last week’s world championships have in the past served drug suspensions.