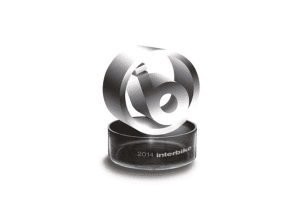 The inaugural InterBike Awards in Las Vegas, saw three prestigious triathlon honours awarded at a ceremony on September 11. A sold out night saw 36 awards handed out. Triathlon Business International (TBI) sponsored the triathlon awards and triathlon legend Michellie Jones and Mike Reilly, ‘the Voice of Ironman’, were the award presenters.

Interbike is the largest bicycle trade event in North America, bringing together manufacturers, retailers, industry advocates and media to conduct the business of cycling. Established in 1982, the show gathers more than 1,200 cycling-related brands, over 25,000 total attendees annually and is considered one of the most important global trade events for the bicycle industry.

Triathlon Business International (TBI) is the leading organization dedicated to promoting the sport and business of triathlon. Founded by a coalition of industry leaders, TBI’s mission is to leverage the knowledge, talent, and resources of the leaders in triathlon to the benefit of the sport. Its overarching goals are to increase and retain advocates of and participants in triathlon, and to foster a positive image of the sport globally.