In recent years, chocolate milk has become the darling of the recovery drink world. You’ve likely had a carton handed to you at the finish line of the race or have been told about its magical 4:1 carbohydrate to protein ratio. Here are some of the reasons you might want to think twice about drinking chocolate milk for recovery. 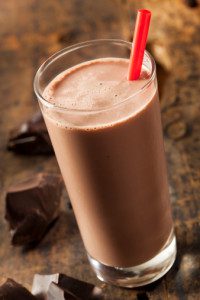 1) The idea of chocolate milk as a recovery drink was created by those with a vested monetary interest.

2) You probably aren’t working out long or hard enough to need a recovery drink.

The average cup of one per cent chocolate milk (250 mL) has approximately 160 calories and 25 grams of sugar. A 120-pound female running five-minute Ks burns around 650 calories per hour of running. Your recovery drink just took up a quarter of the calories burned on your run. Since milk is a liquid, it is unlikely to satiate post-run hunger, meaning you’re probably having a snack as well. You’d be better off skipping the milk and having a snack that includes protein and carbohydrate, like Greek yogurt and berries.

3) Chocolate milk is high in sugar.

The average glass of chocolate milk has approximately 25 g of sugar. To put that in perspective, the Canadian Heart and Stroke Foundation recommends aiming for 48 g per day (based on a 2,000 calorie).

4) The main protein of chocolate milk is casein.

Most recovery shakes are made with whey protein. Casein is absorbed slower than whey and contains less of the amino acid leucine, which stimulates protein synthesis, than whey does.

5) The primary carbohydrate of chocolate milk is lactose.

Lactose, the main sugar in milk, is absorbed slowly, which is not optimal for replenishing muscles quickly.

6) The fact that it requires refrigeration can be inconvenient.

You can’t throw a carton of milk and leave it in your bag all day the same way that you can a protein bar.

7) Studies may not tell the whole story.

The most oft-referenced study supporting chocolate milk comes out of the University of Texas and was run by Dr. Richard Ivy of the kinesiology department. The study compared chocolate milk to a fluid meant to emulate the typical sports drink (think Gatorade) and a calorie-free beverage. Within the study, of the 32 cyclists monitored, the ones from the chocolate milk group recovered the best and built the most lean muscle. However, it would have been interesting if they had included a group that consumed a snack after their workout, to see what those results would have shown.