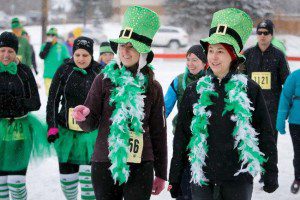 I would need to drink an entire keg of beer and then some to down my own weight in the stuff. Though I imagine they expect you to share it, a Calgary race is offering up a runner’s weight in beer next Sunday in a St. Patrick’s Day-themed race.

The 5K and 10K road races draw a mix of social and competitive participants, some 1,000 in total. Overall and age-group winners compete for cash prizes and commemorative beer steins while all participants, including those wearing colourful – mostly green – costumes are rewarded with Irish stew, fresh scones, Lucky Charms and cold beer at the finish. There are also draw prizes, including one for best costume.

Best of all is the grand prize draw to one lucky male and female who will win their weight in beer. Random winners who must be present to claim the prize are invited to the awards stage to sit on a specially designed teeter-totter. Twelve-packs of Village Brewery Beer, a local craft brewery, are then added until the weight is equal. Some lucky winners have been known to take home up to 17 full 12-packs of beer!

The event was created by the Calgary Roadrunners who still organize it to this day. Originally called the Frozen Nose and Toes, the CRR saw an opportunity to start a St. Patrick’s Day-themed event. The run celebrates its 28th edition in 2015. 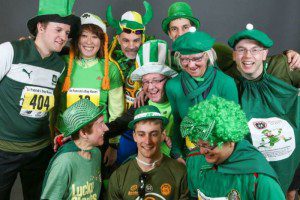 Proceeds from the event are split between the Canadian Diabetes Association and the Calgary Road Runners. The race organizing committee is 100 per cent volunteer-driven and they love doing what they do.