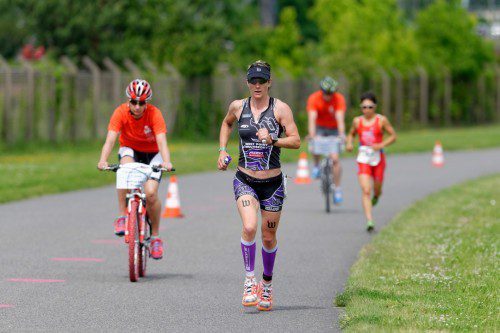 The fast riding Rachel McBride dominated the field in Calgary today setting  new records for the bike course and race course, finishing in 4:07:19, nine minutes ahead of her closest competitor, Mandy McLane of the US. Canada’s Lisa Mensink was third in 4:17:13.

McBride exited the water in fifth but quickly opened up a huge gap on the bike with her 2:13 split. Emma Kate Lidbury had the second fastest bike split in 2:19. Despite her astonishing effort on the bike, McBride ran 1:25 to match American Erin Spitler for the fastest run split as well.

On the men’s side American Andy Potts won in 3:43:43 with Will Clarke of Great Britain only 36 seconds back in second. Brandon Marsh was third in 3:47:32. It was fourth place finisher Jordan Rapp who stole the show for the men on the bike, riding 2:02.

After the race a contented Clarke said, “My swim was the weaker part of the race, I came out about 1’15 behind Andy Potts but on the bike I rode really hard to close the gap and we ended up in a select group of Jordan Rapp, Andy Potts and Brandon Marsh. The first half of the bike was way harder than ever before for me. I had 365 watts at the far end of the course and on the way home I was expecting it to back off a bit but it never really got easier!”